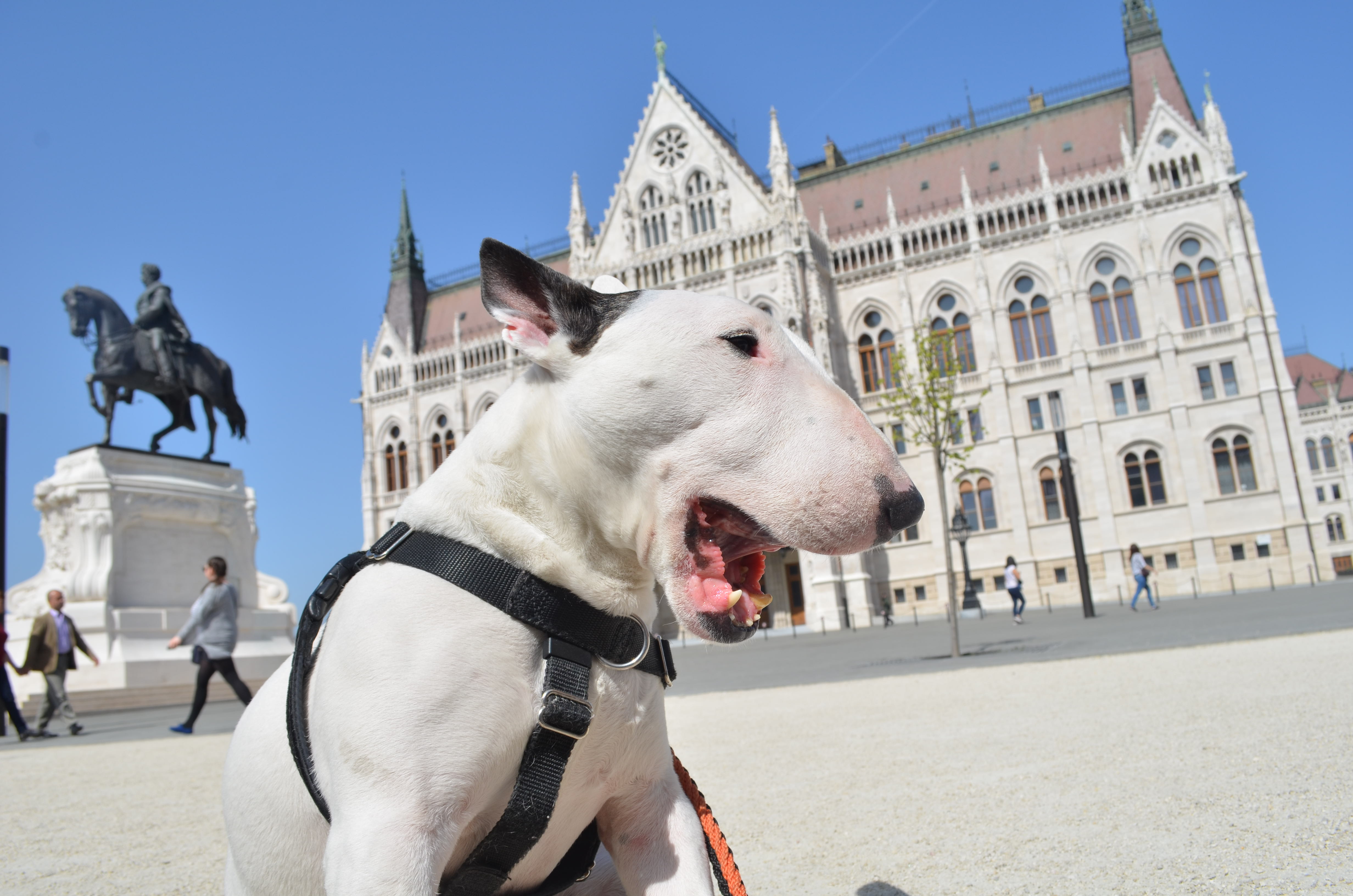 Budapest. Just saying that word evokes images of a beautiful city rich with culture and great people and extravagant buildings.

My adventure here followed my journey to Vienna and so we arrived in Budapest on a late afternoon. We had only one full day in Budapest and this time it was just me and Danny because our friend Veronica had returned to Prague. So there we were, two backpacker friends of different species setting foot and paw onto an unknown city.

I only knew that I was hungry to explore Hungary. Get it? Ok, I’ll stop. I’ve said about thirty of these jokes to Danny already.

We arrived at the massive Budapest Keleti station and we were still reeling from our time in Vienna. Upon arrival we both gazed up at the building and I felt so small. It felt like a journey just to exit the station as it was so huge.

Click the link below to see a bit of video from our arrival.

Our hotel was in the eighth district of the city called Józsefváros. Now say that eight times really fast! It was far walk from our hotel and we were thoroughly exhausted from all the traveling.

By the time we found our hotel and checked in, the sun was nearly setting and so we explored a bit of the neighborhood and then we returned to the room and I was able to rest my weary bones for a bit.

After a quick reinvigorating nap, we trotted around the city to see what was in store for us.

After a bit of exploring our own neighborhood, we walked toward the center of the city

We discovered impressive architecture that marveled us even at night. We stopped and stared at St. Stephen’s Basilica. The square had a few people walking by, but it was mostly empty. I charged onward toward the center to see more of these cool buildings, practically dragging Danny with me.

When we reached the river, we were greeted by a massive bridge, known as the Chain Bridge, or Széchenyi Bridge, and it stretches over the River Danube, allowing lanes of traffic to either side of the city. The sides of the city were actually known as Buda and Pest, which were once considered two distinct cities that joined in the 1800’s.

We walked down the steps in front of the bridge so we can see the other side. From where we stood, I could hear loud music on the side and there were boats cruising through the river and we could see massive and regal-like buildings. I told Danny that we had to cross the bridge, no matter how long it was or how tired our legs were from traveling all day.

“I wish it snowed in Budapest, only so that we can have a sled and you can pull me over to the other side,” Danny said.

So we pulled ourselves back upstairs, took one last look at our side and decided to venture over the bridge and make it to the other side.

Once we made it to the other side, we realised we were still quite far from the hilltop castle. So we grabbed something to eat to refuel ourselves then made the walk back and we promised to come back the next day and see more. But we still did a bit of sightseeing before we turned back.

When we returned to the hotel, Danny was hungry but it was past midnight and the only places open were kebab shops and McDonald’s, so he chose McDonald’s..in Budapest.

In the morning, we ate a quick breakfast at the hotel and left our things to explore the city. We were in a hurry as we had only the whole day to see Budapest and then we had to take a train back home. We tried to jam everything in and go by foot.

The Parliament building was massive. Imagine if I could run around in there all day! I would do circles and run up and down the steps and then I would eat at a large dining table that could fit an endless amount of food and Hungarian Goulash! I’m getting hungry just thinking about it! Or Hungary.

I stopped and sniffed the Parliament building and we stayed here for a good half an hour just staring at it in complete awe.

We trudged onward exploring the city some more and exchanging pleasantries with the locals. It was perfect weather for a couple of travelers like me and Danny, hot, but still ok for me to walk around. There was so much buzz going on this city. Huge crowds that made me feel like I was a part of a big pack.

As in Prague and in Vienna, Budapest had so much precious architecture but it was also very different from those two. The three cities all had distinct flavors and personalities and I loved them all!

After walking around for much of the day all four of my legs were spent and Danny’s two were also worn out. So we walked back toward our hotel and I followed my nose to where the Basilica was.

Our Budapest adventure was short and sweet but we tried to see as much as we could and at least we have a reason to come back! In the hotel we grabbed our things and journeyed up to the station.

The way back to the UK was an adventure in itself! We slept in a couchette and it was the longest train ride that either of us had ever experienced. We sat on a reclinable chair opposite another row of reclinable chairs. We reclined chairs on both sides and joined two of them together to make a bed. I slept on Danny’s legs. Two other people eventually also came into the room and did the same thing. So it was three people and myself sleeping in the same room on a massive rolling hunk of metal headed toward the North-West of Europe. What a ride!

And so ends our adventure in Central Europe. I enjoyed Prague, Vienna, Budapest and all the other cities and towns we visited on this all too brief trip. My paws will now carry all the cool memories I made while traveling around these beautiful countries.

I’ll see you guys on the next adventure which takes me to Wales in England!