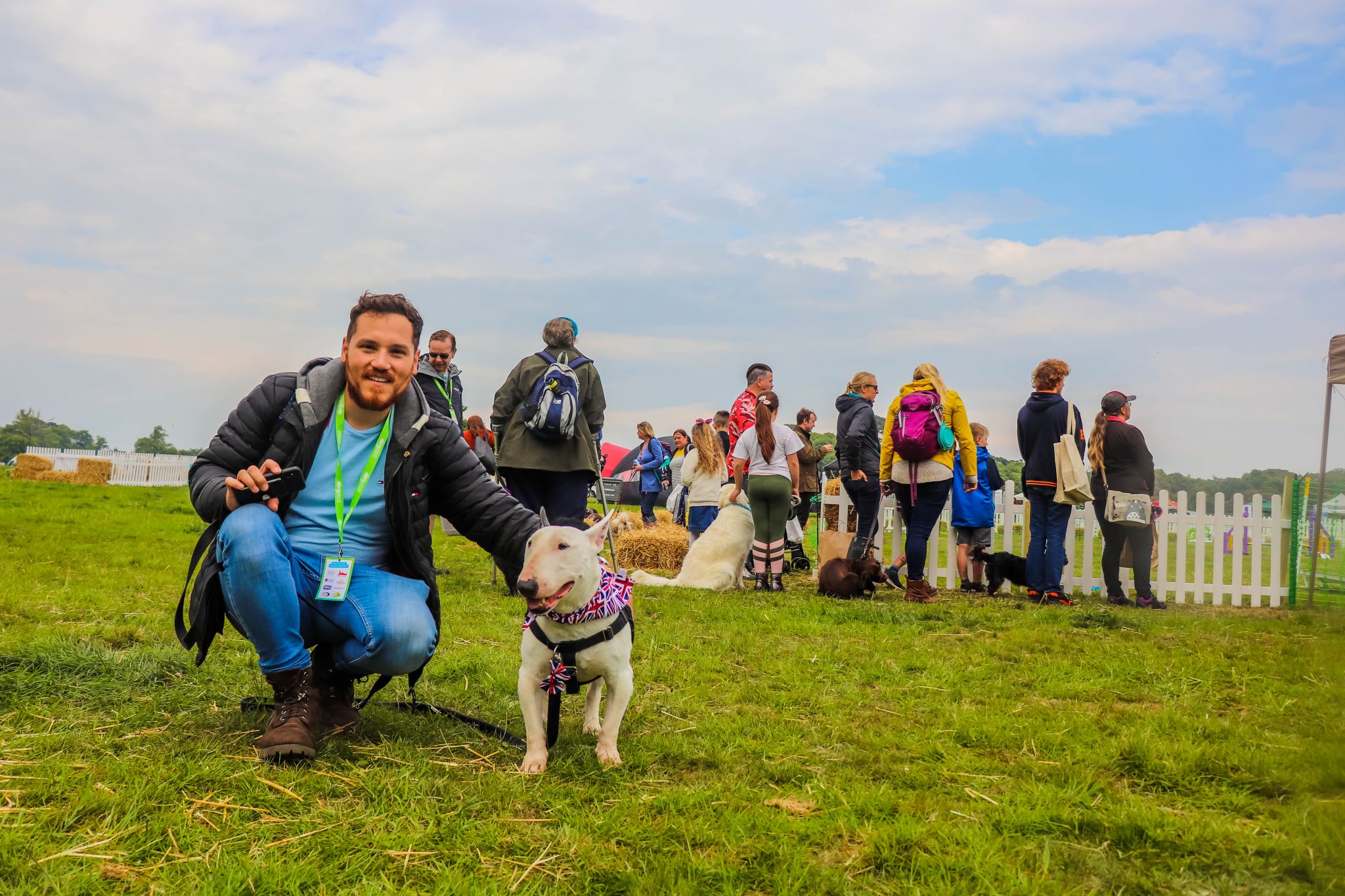 Hello my friends! It’s Rocky the Traveller! My human took me to a dog festival in the New Forest. That’s right! A dog festival! How cool is that?

It was the first ever DOGSTIVAL, which was made for dogs and dog lovers! 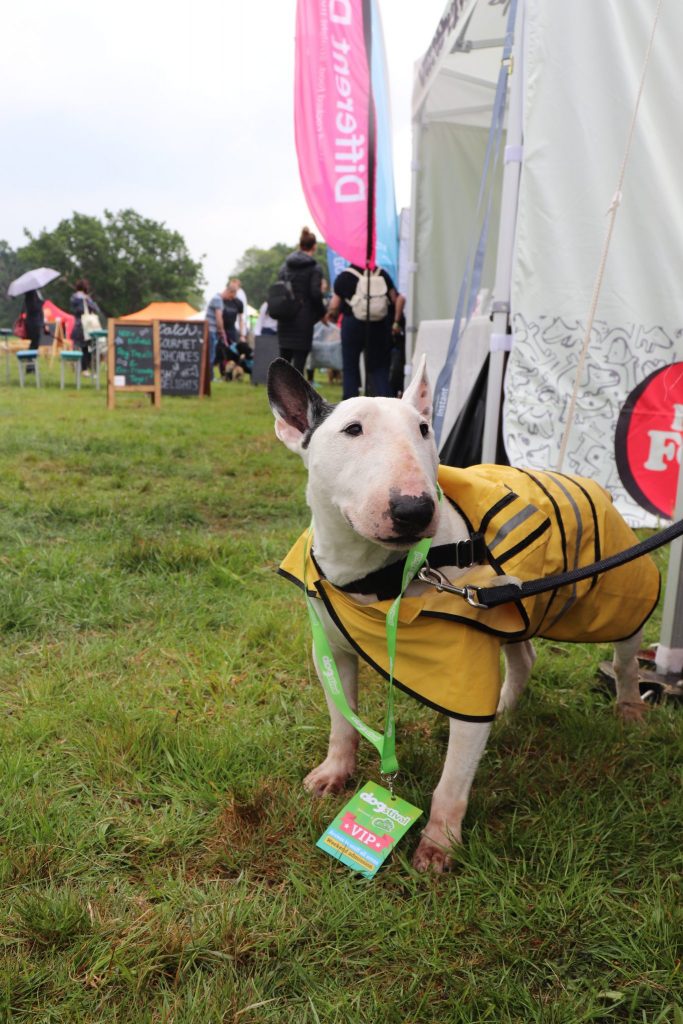 It’s always great to go to events like this so I can meet and play with other dogs. My human also says it’s important to meet a lot people too, especially dog lovers and I love dog lovers!

Now on to the festival! We were told to expect dogs. Lots of dogs.

The entire festival took place over two days. We missed the first day but made it on the second day which was a Sunday (call it fashionably late).

I was sad to miss the first day because I couldn’t wait to meet new furriends! But once we hopped in the car on Sunday I grew more excited!

It rained as soon as we arrived but we were still determined to make the most of it! We arrived to big open fields filled with dogs and so much going on. We immediately saw a bunch of tents and booths and there were agility courses, a pool, dog games, tons of exhibitors representing dog food, dog photography, dog rescues and dog toys.

Whew! I don’t think I said the word ‘dog’ enough! My tail was wagging faster than lightning on this rainy day at meeting so many dogs!

One of our first booths was at Different Dog, a dog food company. I was so happy to get free samples!

I wanted to come back to the Different Dog booth dressed differently of course, so I could get more free samples!

One of the first dogs we met: a beautiful Bassett hound! My human’s mom had one of these a long time ago!

I met so many other dogs!

And I even stumbled upon a little pen filled with more cute dogs!

As we continued to make our way through the festival I saw a giant yellow wheel! I wondered if it was a toy to play with or one of those hamster wheels, but especially made for big dogs instead of little hamsters. 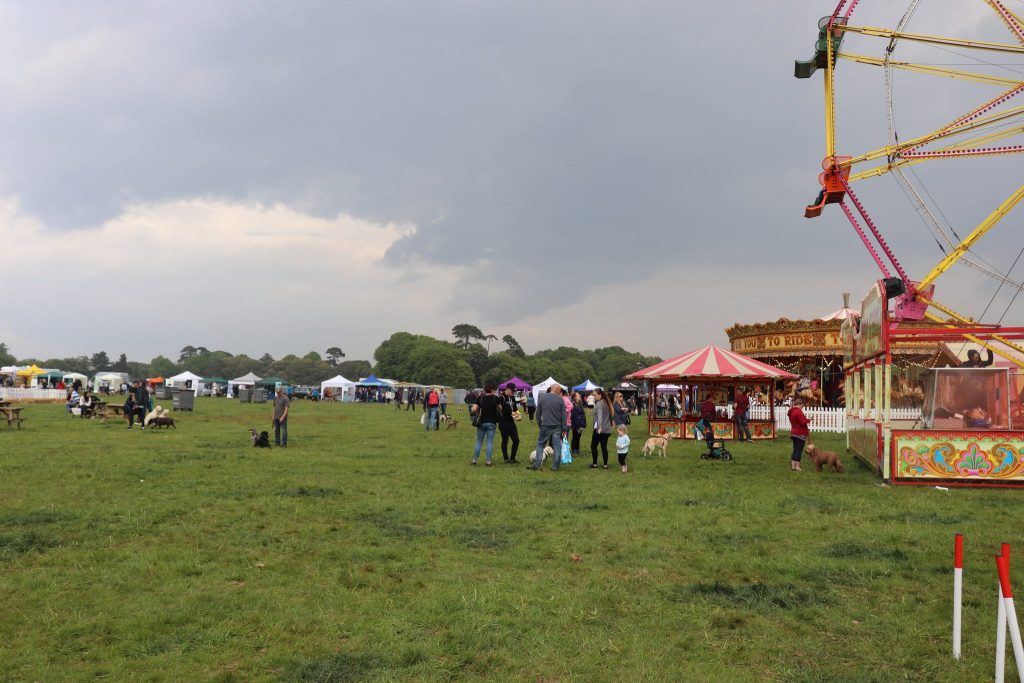 When I arrived I realized it was a giant yellow and red ferris wheel (for people)! I know us dogs cannot get in there but a dog can dream right?

That whole area was the amusement park area where there were different games for both humans and dogs! 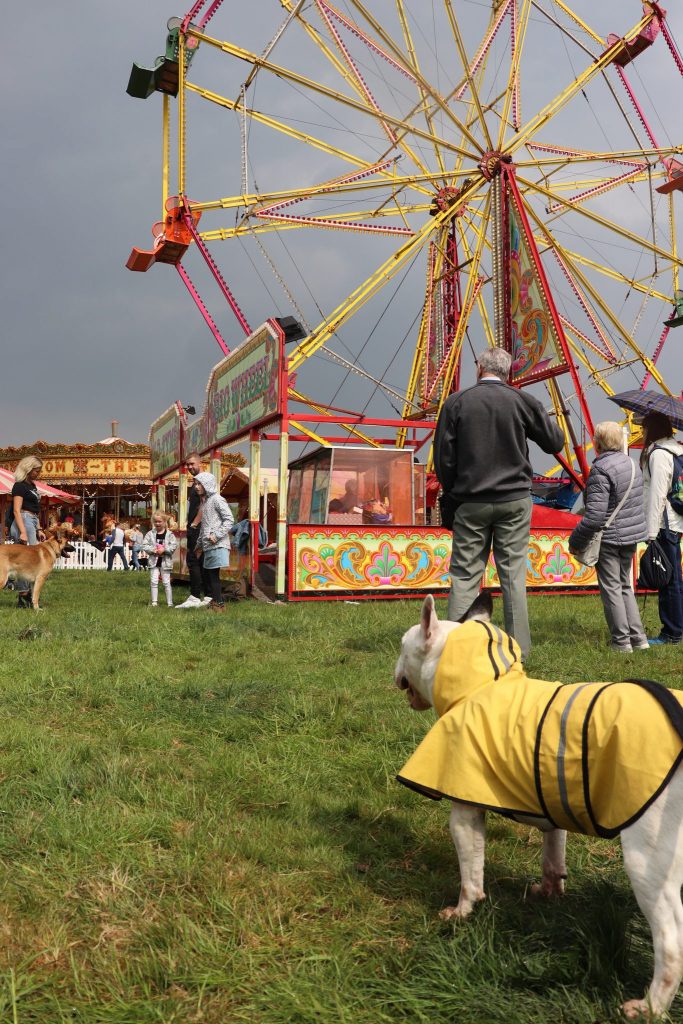 Our first fun activity of the day was the sniffing game where I had to use my great and powerful big nose to find hidden treats. 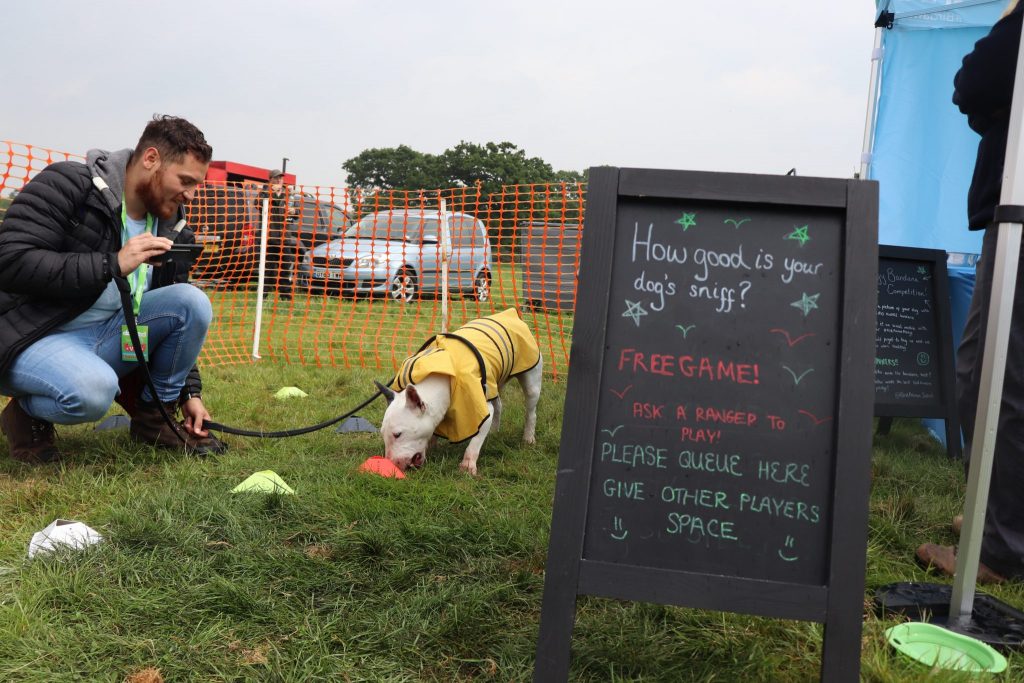 At first it didn’t work out so well. So my human had to step in and give me a helping hand. It’s not cheating though, right? 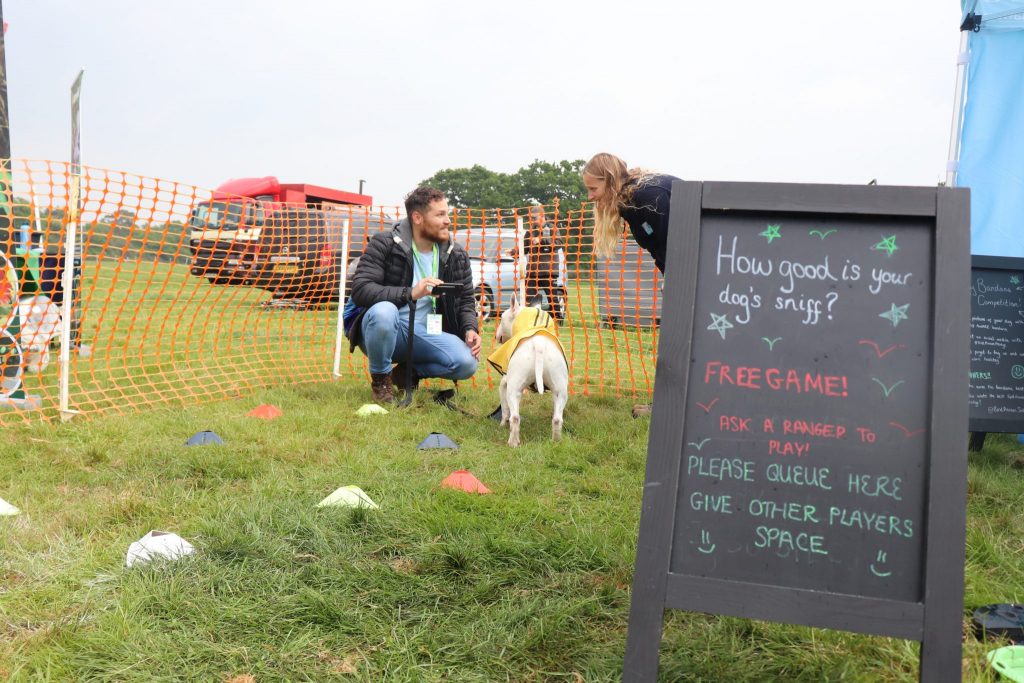 Eventually I did find them all! I’m so smart! Must be the big head!

After that it was time to go watch other dogs play some games and do some tricks!

We saw this elegant Vizsla and her human jumping about in the agility course. How awesome! Wish we could’ve done this but Danny was too worried that I would just be focused on all the other dogs around me! 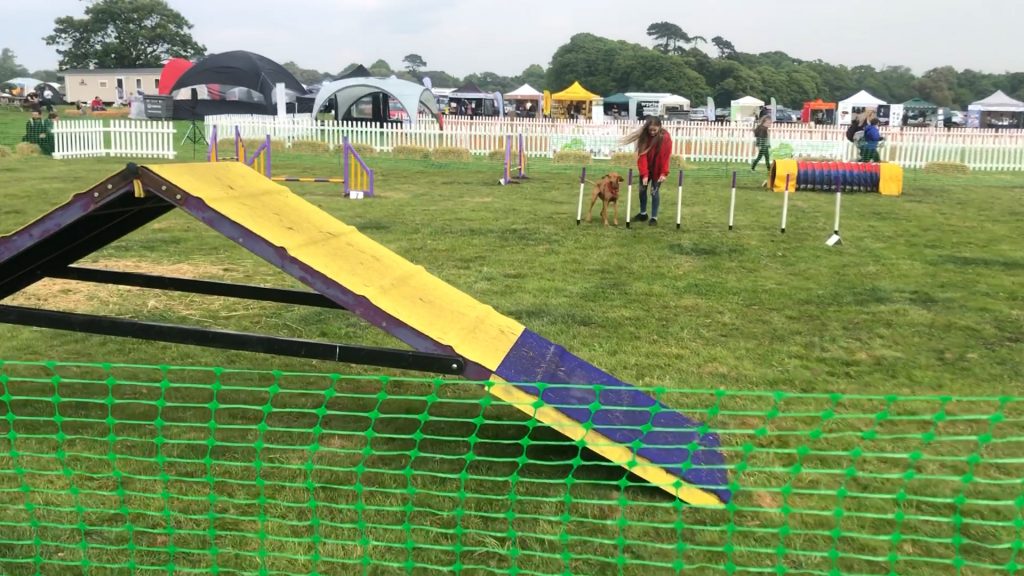 Teamwork just like me and my human when we played the sniffing game! Hope the doggie gets some well-deserved treats.

Throughout the fields there was so much going on that time flew as we stopped by each booth and greeted ourselves. There were about 200 exhibitors all showcasing their latest products and services for us dogs as well as food for people (and I hope they share their food!). There were also quite a few different presentations and shows going on at the same time so there was tons to do for everyone.

We made many friends throughout the booths.

Now it was time to have a look at the doggie swimming pool!

Right at the booth next door they were selling beautiful bandanas from a local company called Slumbering Hound. Danny really loved the Union Jack bandana which matched my bowtie.

By the time we finished eating, the festival winded down. But we still wanted to see the booths that we hadn’t seen yet! We had spent so much time just exploring one side of the field and had to see the other one before we called it a day and maybe revisit some other tents.

We got a lot of goodies since many of the booths were starting to close and were giving away their stuff. My humans got some free fudge (I wasn’t allowed to eat it!)

Now I really wish we had come here earlier or the day before! Overall we were one of the last guests to leave the festival because we just didn’t want it to be over.

A special thanks to all the good folks at Dogstival for this event and for the awesome goodie bags that Rocky was gifted with. We had an incredible time and can’t wait for next year!

At the end of it all were were quite pooped.

Another special thanks to our bestest human friend Paula the dog buddy sitter and to all the dogs and humans featured in our post!

Check out our full video below for my experience at the Dogstival!

Thanks for watching my friends!

Is your dog a car traveller like me? Well then, if you’re anything like me then you leave tons of hair everywhere! Check out this awesome car sear cover from amazon and click on the image below so you can get yours too!

It’s got an amazing Amazon rating and it’s easy to install and clean! See you around friends!