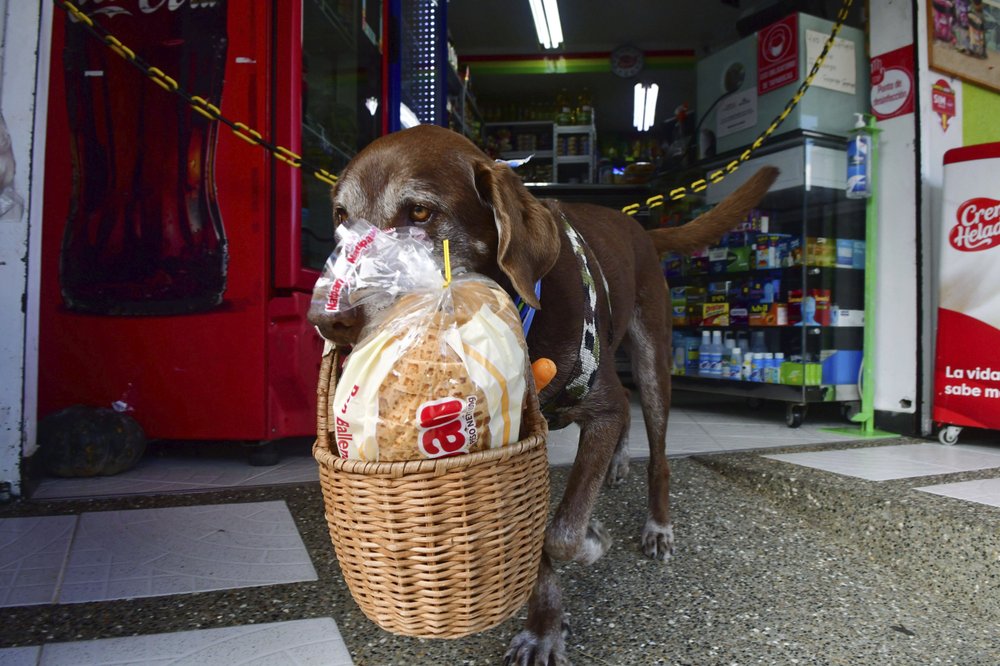 Eight-year-old chocolate Labrador Eros trots through the city of Medellin, Colombia several times a day with a straw basket in his jaws, taking vegetables, fruit and packaged foods to customers of the El Porvenir mini-market. The handsome pooch is paid with treats and massages of his furry head.

“And people love it when we send the dog,” Botero told the Associated Press.

Eros wasn’t always a star. Eros was accepted into the family begrudgingly by Botero after repeated requests by her son to adopt a dog.

But Botero and the rest of the family quickly fell in love with the pup. And when they opened a mini market four years ago in the hilltop neighborhood of Tulipanes, he started to accompany Botero and her kids to make deliveries.

While Eros doesn’t know how to read addresses he does remember the names of customers who have previously rewarded him with treats. And with some practice, he has learned to go to their houses on his own.

“He knows the names of five or six of our customers” Botero said. “So I send the merchandise with a receipt in the basket, and my customers pay me through a bank transfer.”

As Covid-19 cases in Colombia have climbed to more than 3,000 new infections each day, city governments are imposing social distancing measures, and limiting the number of days per week that people can go shopping.

That’s turned delivery workers into an increasingly important part of the economy.

Eros might not know that he’s become an essential worker. But he is happy to help his owners and collect his daily pay.

“He’s quite a glutton” Botero said. “He won’t leave your house until you give him a treat.”

Eros isn’t the first doorstep delivery dog. Over in New York a golden retriever duo work as greeter dogs for a brewing company and while the beers are too heavy for the duo to deliver, they do greet their customers with empty beers cans wrapped around them, before their pet parents safely deliver the beer.

The Covid-19 pandemic has changed the way many businesses operate. Restaurants and supermarkets have seen an increase in demand for delivery services as people try to maintain social distancing. However, it seems having a dog do deliveries is less riskier than having humans drop off the groceries, in the right conditions.

Eros’s deliveries fit inside of a small basket that he was trained to carry with his jaws and to drop off. This is incredibly impressive, but what’s even more extraordinary is that Eros is able to remember houses and customers – and he doesn’t leave until he gets paid – in treats! Adorable! It just goes to show how amazing man’s best friend’s skills are, which have turned out to be priceless during this pandemic. Some may even call Eros a hero, he is after all, an essential worker!

The deliveries seem to work in this small town and there doesn’t seem to be any risk involved with Eros’s deliveries so perhaps in smaller neighborhoods, such as Eros’s neighborhood, with no traffic, and with a light load, this new method of delivery could be ideal, provided the dog doesn’t eat what’s in the basket!