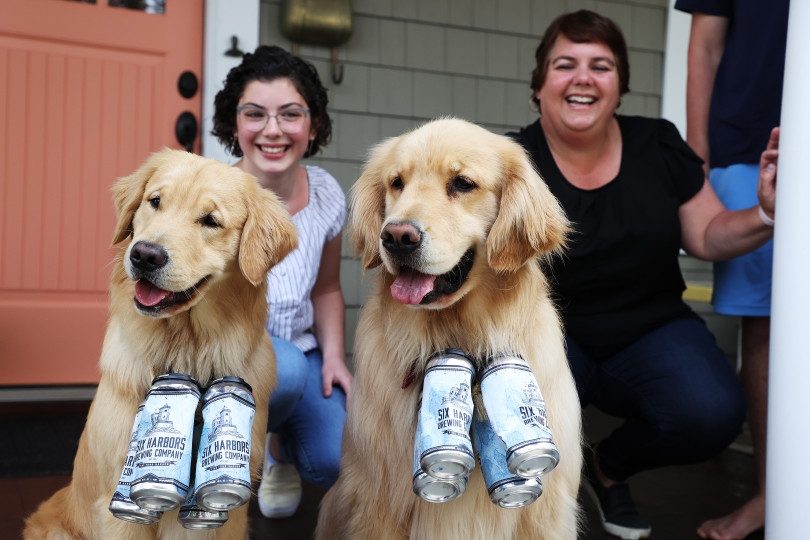 A golden retriever duo in New York are bringing happiness and beer to residents in Huntington and Nassau county as the state continues with its lockdown measures.

Known as the brewdogs, Buddy and Barley are delivery and greeter dogs for Huntington-based Six Harbors Brewing Company.

The brewing company shifted its services to curbside pickup and delivery during the lockdown.

Owners Karen and Mark Heuwetter told CBS News that they have had to “redefine” their brewery business after being deemed essential and thereby allowed to remain open.

According to TimeOut, the Heuwetters attach empty beer cans on a string and place it around the dogs’ necks before they barrel down a green lawn or cement driveway. Donning gloves and masks, the husband-and-wife team then hand deliver cold beers to the thirsty customers while the golden duo watch on.

“We’ve had to change our business model,” Mark Heuwetter told NY Daily News. “We created an online store and now people can have curbside or delivery. We took the dogs on a few trips and people were loving the dogs when they came, so we added them. The dogs make a nice compliment to the delivery service. They put smiles on people’s faces.”

The Heuwetters say that customers are now submitting orders specifically requesting that Buddy and Barley show up on the delivery drop-off.

According to BringFido.com, Six Harbors is a dog friendly brewery, which of course makes sense considering the brewery’s mascots Buddy and Barley.

It’s great to see dogs putting smiles on faces during the coronavirus crisis. Dogs have really stepped up in the face of the outbreak and have not only served as therapy dogs, but have also served as virtual tour guides, trainee sniff dogs, and now as greeter and delivery dogs. The story of this handsome duo should show the world the value of a dog’s greeting and could hopefully even lead to more breweries opening up their doors to dogs once the crisis is over.