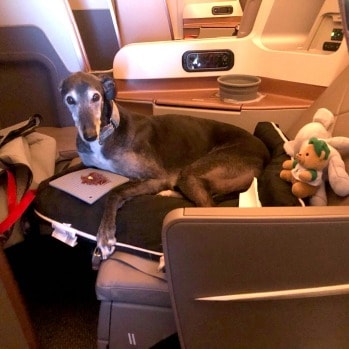 It’s every traveler’s dream to soar through the skies in the business cabin of an airplane. Lewis, a special four-legged passenger, got to live that dream by flying business class on a Singapore Airlines flight from Australia to Italy.

The adopted greyhound relocated from Melbourne, Australia to Florence, Italy with his pet parent Mary Meister.

Meister adopted Lewis in 2019 and originally planned to stay in Melbourne, however she was stood down from her job working in hotels and found that the city’s lockdowns took a toll on her mental health so she decided to relocate to Florence. She knew she had to take Lewis with her on this new adventure.

“I was basically researching if dogs were allowed in the cabin, which some airlines including Singapore Airlines allow,” Meister told Traveller. “Unfortunately they have weight restrictions which meant that Lewis didn’t qualify. I then saw that they allow ‘Emotional Support Animals’ and researched what that meant.”

Meister was also being treated for anxiety, depression and panic attacks. She then spoke with her doctor and therapist in Melbourne and both agreed it was worth applying to have Lewis fly alongside her in the cabin.

Had Lewis flown in the cargo hold, it would have meant a three-day separation.

“Being separated for three days was out of the question, the longest I’ve been apart from him, since starting to work from home, is a few hours at most,” Meister said.

Meister saved up for a business class seat, planning to have Lewis sit and sleep at her feet. However, she found that the cabin was virtually empty (flights to and from Australia have few passengers due to international border restrictions). This meant that Lewis was able to sit in the seat right beside her, with a puppy pad for any potential accidents.

“He was very well behaved and stayed when asked,” Meister said. “He definitely didn’t enjoy take-off or landing, but he slept for 99% of the flight.”

Lewis’ birthday happened to land during the second leg of the journey which saw the flight attendants bring Lewis muffins, croissants and strawberry jam, much to his delight.

Now living the life in Italy, Meister and Lewis enjoy the country’s many off-leash parks.