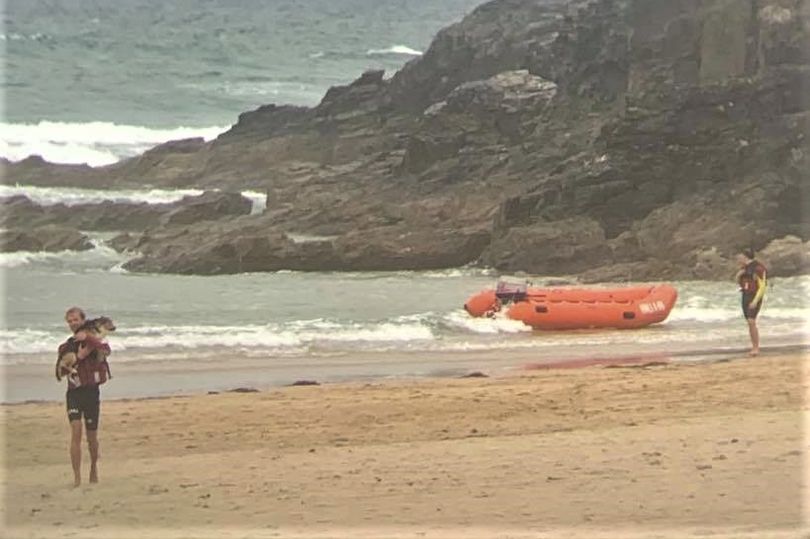 Lifeguards from the Royal National Lifeboat Institution (RNLI) in the UK rescued a dog after he fell 60 feet from a cliff while chasing a rabbit.

According to Cornwall Live, Ronnie, a Jack Russell-corgi cross, was being walked by his owner along the top of the cliffs between Perran Sands and Perranporth, on the coast of Cornwall, when he caught sight of a rabbit and chased the rabbit in the direction of the cliff edge.

By the time Ronnie’s owner, who lives locally, had caught up, Ronnie was nowhere to be seen. He immediately headed down to the beach where he raised the alarm with the RNLI lifeguards.

RNLI lifeguards Rory Tellam and Tom Cutmore launched the inshore rescue boat to head to the area where Ronnie was thought to have gone over and found him perched on a ledge at the bottom of the cliff.

Thankfully unharmed, Ronnie had survived the fall, but with the tide coming in, there was no escape route for him other than by sea.

With some big surf running, the rescue water craft was also launched to provide back up the lifeguards and maneuvered the inshore rescue boat close enough into the cliff for Tellam to get out and approached Ronnie slowly.

“He was very badly shaken and understandably after his ordeal, a bit scared when he saw me approach, but I eventually gained his trust enough to be able to put him in the IRB (inshore rescue boat),” Tellam said.

“We bought him round to the beach where we reunited him with his owner,” Tellam said. “He was very lucky, it’s about a 60-foot drop down onto the beach from the top of the cliffs, we think he must have fallen into the water and scrambled back up onto the rocks, but with the tide coming in, he was in a very precarious place.”

While the UK has some of the most awe-inspiring cliffs in the world, it is important to ensure your dog’s safety when exploring cliff tops. Most dogs would see a rabbit and attempt to give chase, so having them on a leash on the cliffs could be the difference between safety and danger for your dog.

While UK pet parents love to let their well-behaved dogs roam freely, even trained dogs could be at risk for falling and there could be many factors which could put them at risk on the cliffs including spotting wildlife, foggy weather, and a curious nose.