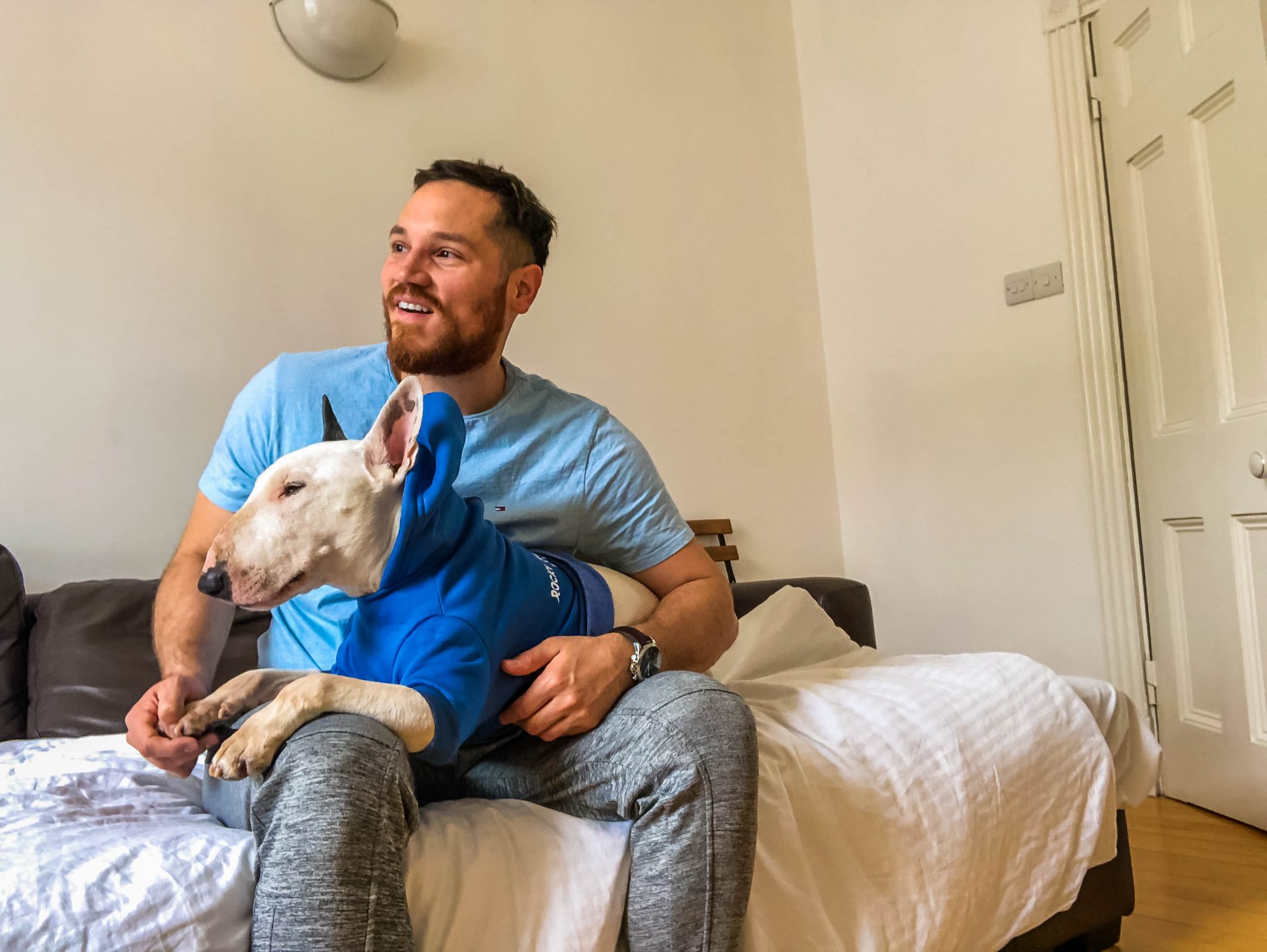 HEY GUYS! Danny and Rocky here! There’s a new way to keep an eye on your pup when you’re away! 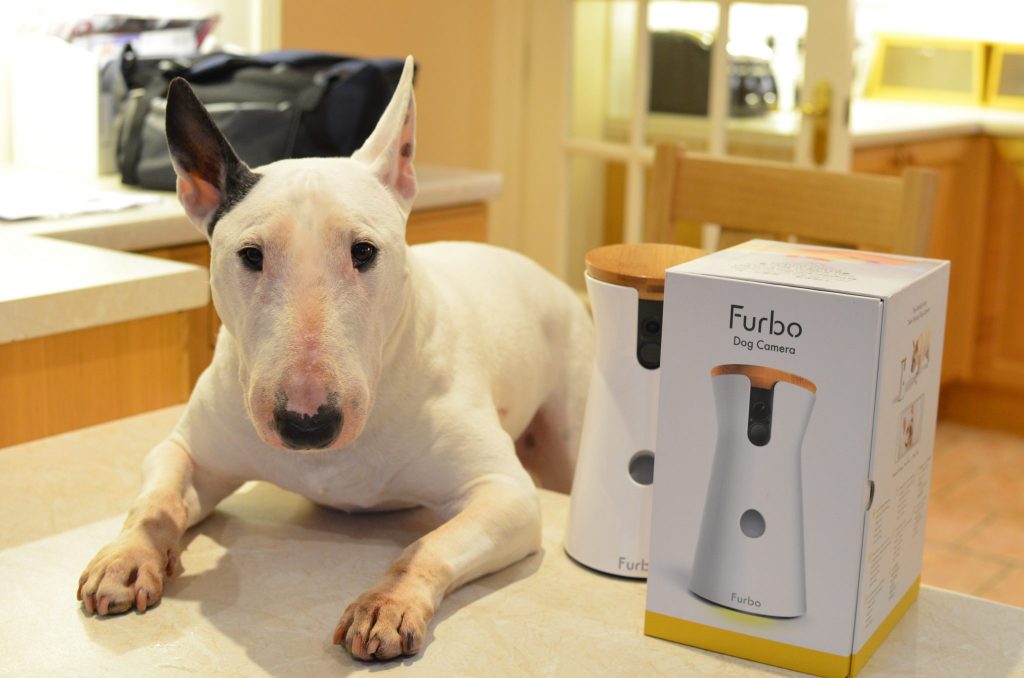 Last month, we received a gift in a beautiful box and it just so happened that the timing was great because we were traveling to London and we were going to stay in a holiday rental so we planned to test our little gift out!

Maybe you’ve heard of it. It’s called the Furbo Dog Camera! Now that’s a cool name, reminds me of that little furry toy from the 90s. 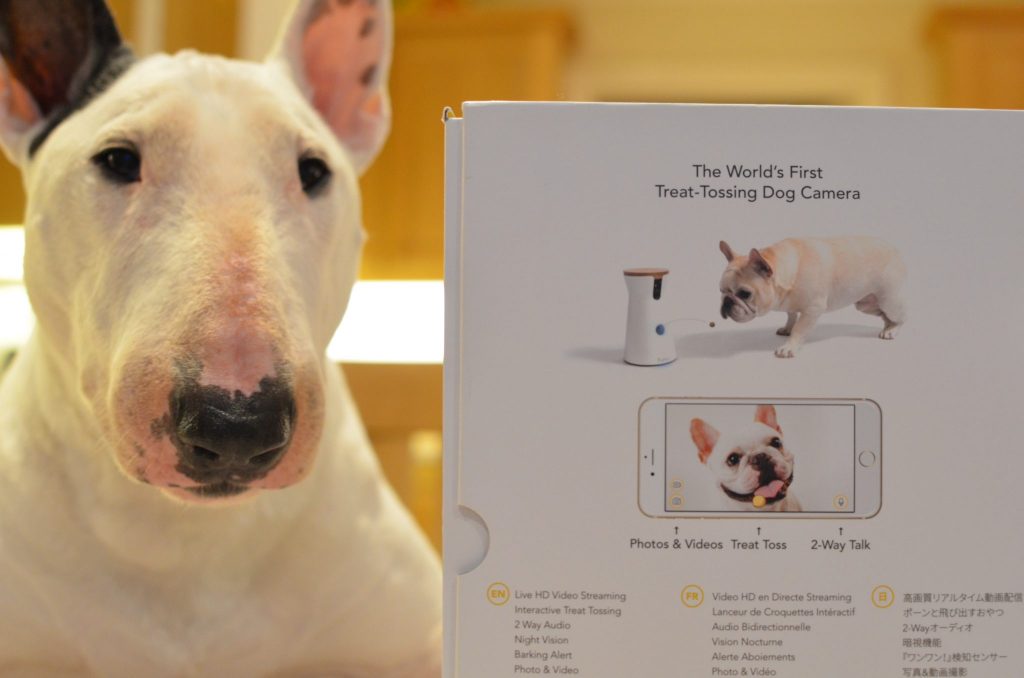 So I had a few events to go to that I couldn’t bring Rocky to (what a shame) but I wanted to keep an eye on him so this gift was perfect! 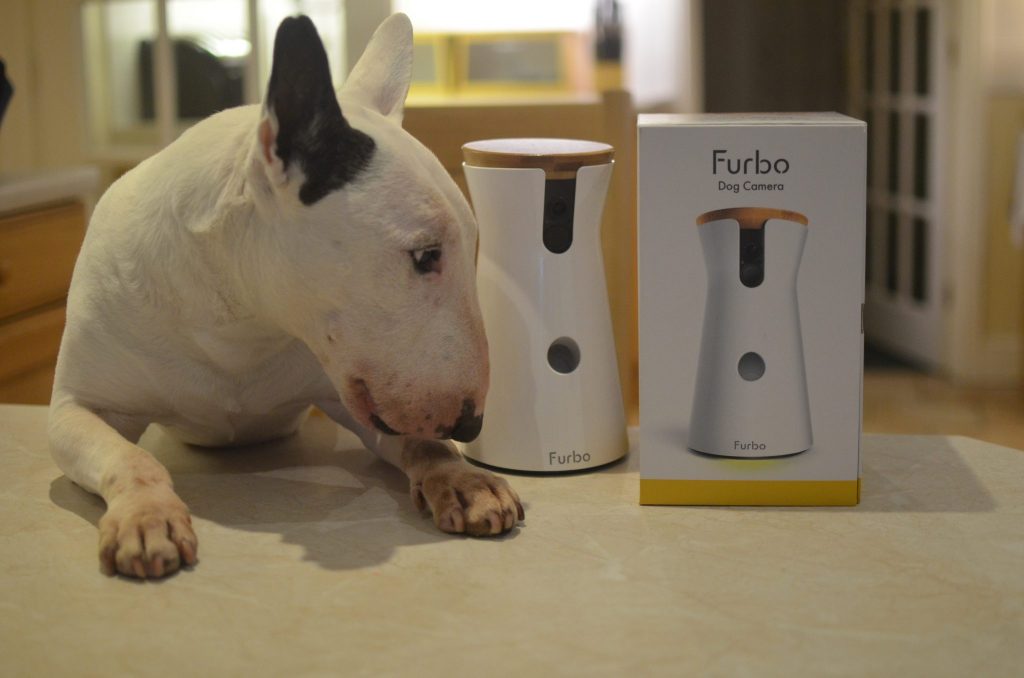 The Furbo camera is a treat tossing camera that’s pretty simple to set up. In the box, you have the Furbo camera and some instructions. Separately, we also received a bag of treats which I will put to good use in a little while! 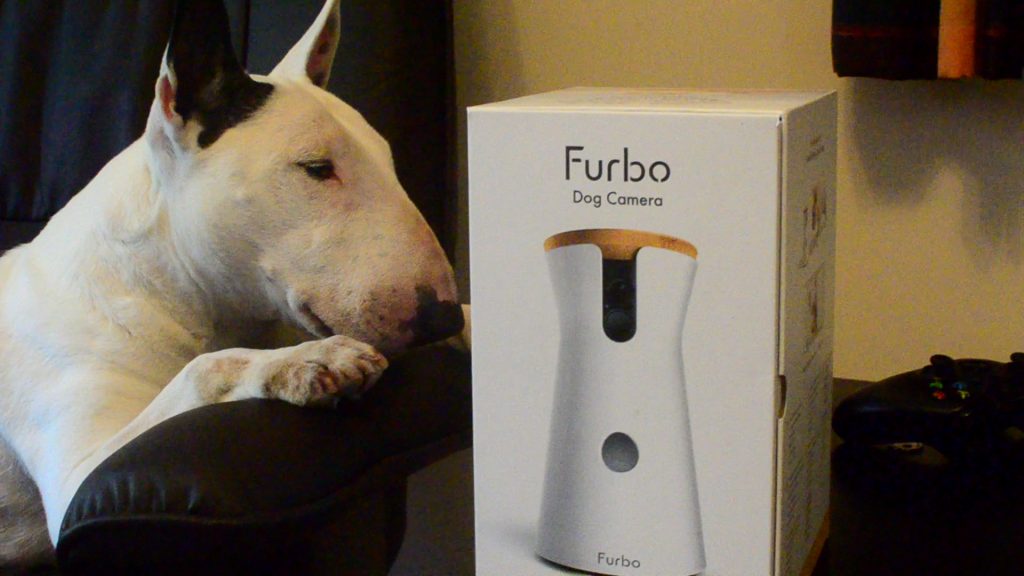 As for the instructions, basically you download the Furbo app and connect that to the wifi in your house and connect your phone and the camera via bluetooth and from there as long as you have your phone, you can monitor your pet. I gotta say I quite liked the sleek design and the wooden top of the camera which feeds the treats inside.

Needless to say, Rocky’s favorite part of the whole toy was the treats, while mine was the fact that I can keep an eye on Rocky while he’s away! 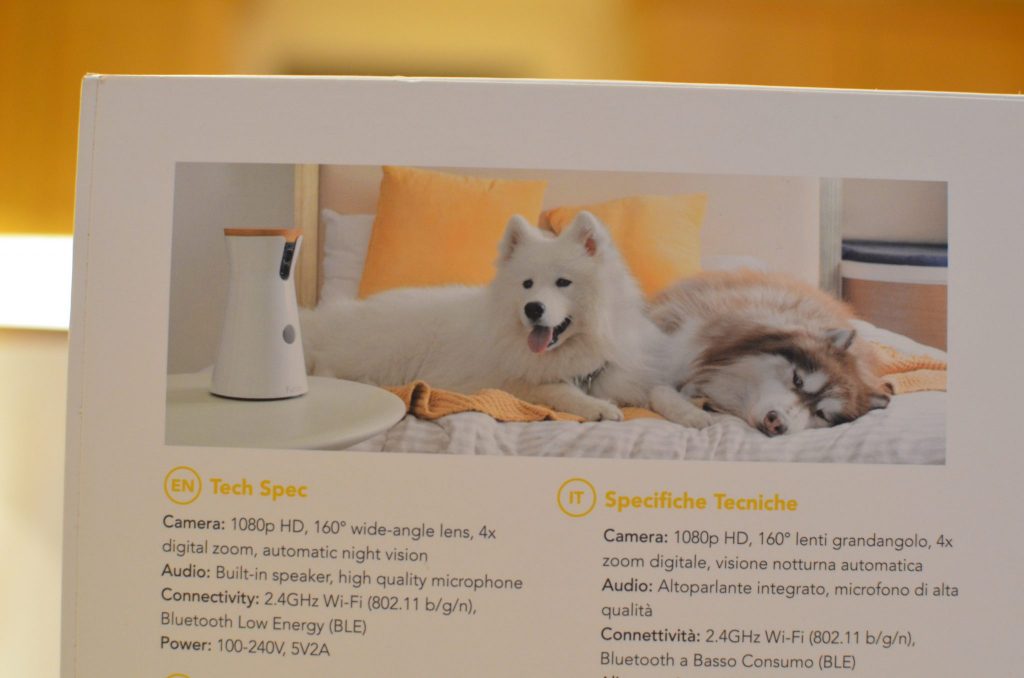 So I’ve already downloaded the Furbo app on my phone and connected the camera to the app on the my phone. Now it’s time to test it out and launch some treats. The app itself is quite simple to use as well as you’ll see in a minute.

So Rocky saw me put some treats inside the toy and I also gave him a little treat which I scooped up from the Furbo. Right after that I also pressed the little treat button on the app, which was quick to respond and launched a few treats on the floor. The camera also makes a little squeak noise when it throws treats so I wonder if Rocky now understands how it works. (He’s smarter than he looks! Brains and brawn!)

After our little test run I stepped out of the flat to go get a haircut and decided it was the perfect time to see what Rocky was up to on his own!

Here’s a look at Furbo vision! This was right after I launched the treats! 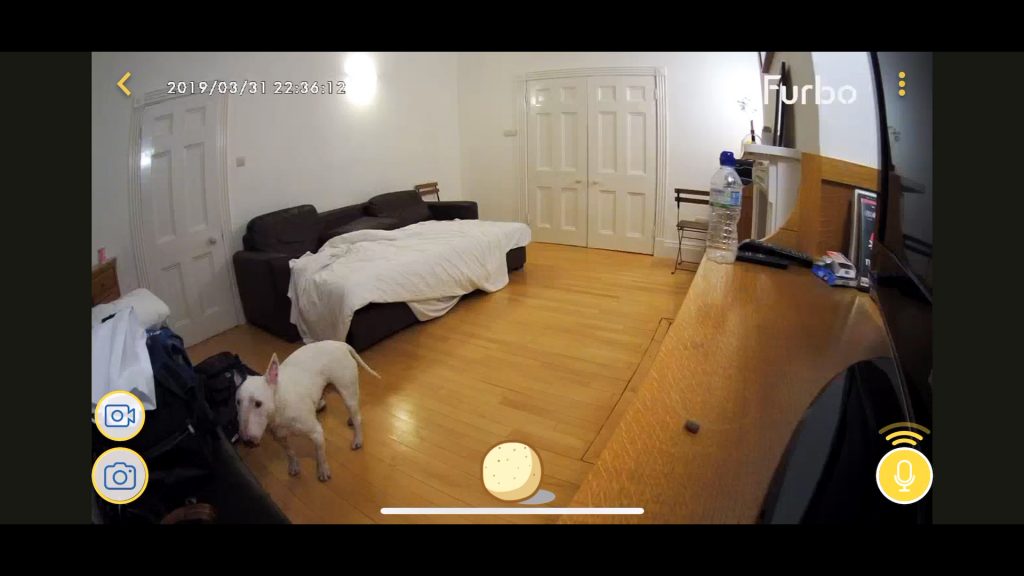 There was some slight lag at first on the monitor, probably due to my connection, but it was fixed quickly. Overall, on this viewing I saw that Rocky picked up all of those treats then stood around and waited by the kitchen door and then hopped on the bed. I tested the treat tosser a few more times even after he was relaxing on the bed, and he woke up and hopped to the floor to grab them.

As for the treat tosser, it isn’t a cannon, but it does get quite a bit of launch distance.

Rocky used that big bull terrier nose of his to get every single last one of those treats. Using the microphone, I tried to call his name a few times but I think the little lad was still on the hunt.

That same night I also tested out the night vision camera. But Rocky was already asleep and even the treat tossing didn’t wake him up! 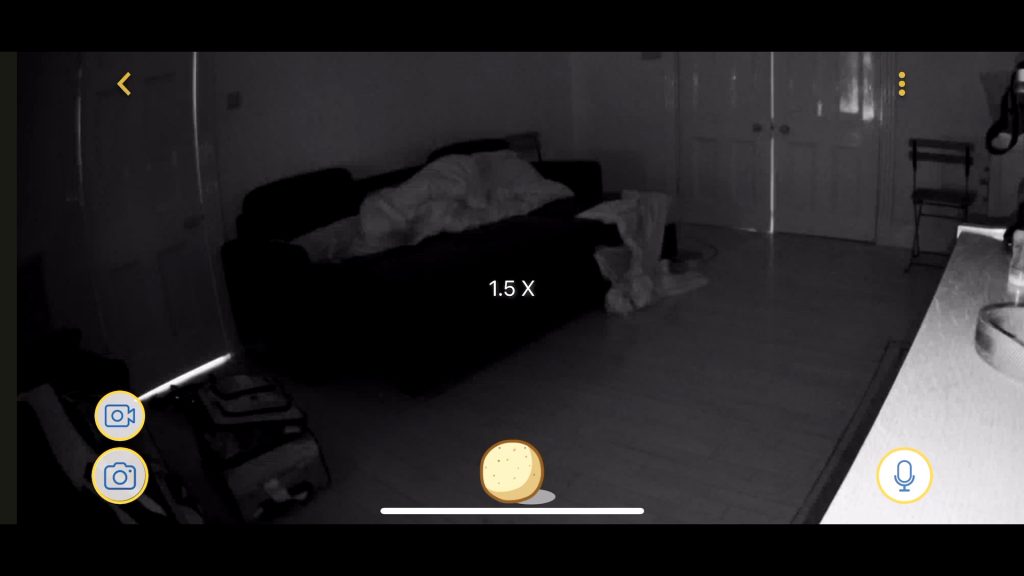 I came back from my haircut earlier that day and I was happy to see Rocky in person. Having seen him on the camera made me miss him more.

I wonder if he felt the same after hearing my voice through the camera. Or maybe he was just happy that he would get treats fed straight to him than hunt for them. Though if he knew I was spying on him, maybe he wouldn’t be so happy to see me! 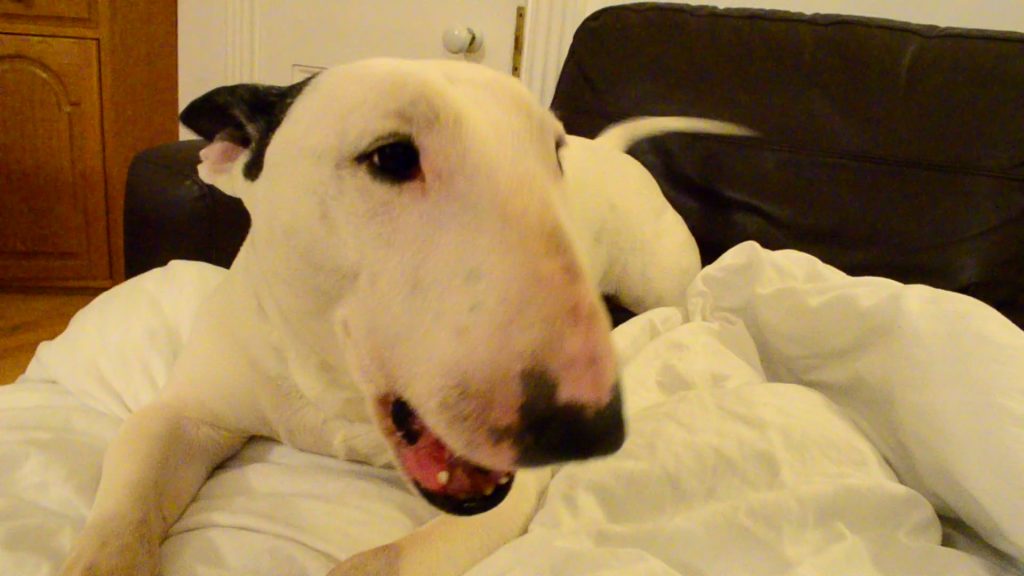 Rocky gives the Furbo Dog Camera four paws out of four! We loved the camera and would definitely recommend it! Not a dog sitter of course, but a great way to keep an eye on your pooch! 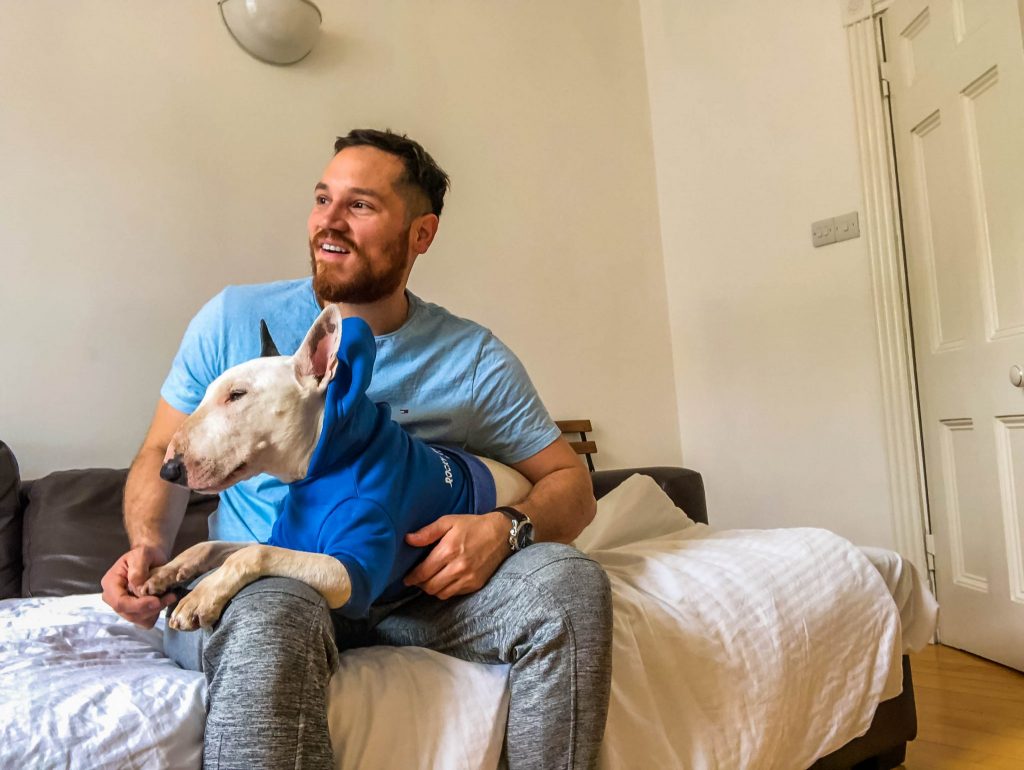 Check out our full video review and see what it’s like to spy on a little bull terrier!

If you’re interested in grabbing one for yourself check out the link: https://bit.ly/2ET9t6D and use the coupon code: rockythetraveller50 for £50 off! check out @furbodogcamera on Instagram and @karkaliscommunications for more information on this awesome camera! Thanks to both for the cool gift!