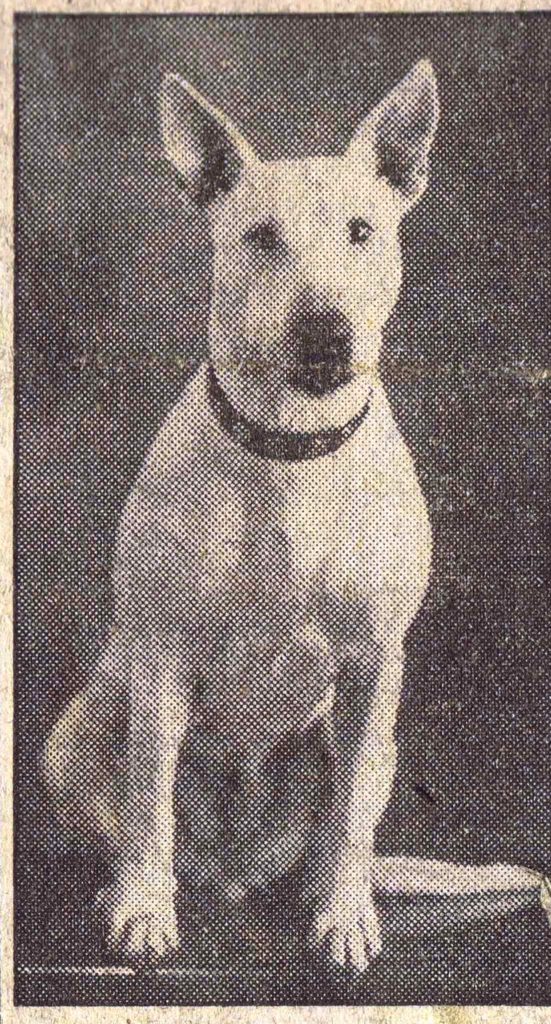 A bull terrier who comforted and boosted the morale of captured Scottish soldiers in World War Two has been posthumously recognised and honored as a hero.

Peggy became their mascot during the war effort, proving herself a loyal companion as the soldiers fought Japanese forces during the Battle of Singapore in February 1942.

The 2nd Battalion Gordon Highlanders were involved in fierce fighting before the British Army’s surrender, when Peggy and the soldiers were taken as prisoners of war (PoWs).

Peggy and the soldiers, along with thousands of other PoWs (prisoners of war), were sent to Thailand to carry out hard labour and Peggy helped boost morale and even helped feed the captive soldiers during their three and a half years in captivity.

Last week Peggy was posthumously awarded the PDSA (People’s Dispensary for Sick Animals) commendation at a ceremony at the Gordon Highlanders Museum in Aberdeen, Scotland. Peggy was nominated for the award.

Peggy was nominated for the award by Stewart Mitchell, a volunteer historian at the museum.

Mitchell described Peggy as “loyal and courageous” to the Highlanders.

“When she saw a Gordon Highlander being attacked, she would fearlessly try to intervene, often at the cost of a blow with a split bamboo cane or worse, a stab from a guard’s bayonet,” Mitchell said.

“She bore the scars of these encounters for her entire life,” Mitchell added.

During their time as PoWs, the soldiers were fed a ration of watery rice three times a day by the Japanese.

However, Peggy came to the rescue. She was naturally adept at catching and killing rats which the PoWs cooked and ate.

The Gordon Highlanders Museum also describes secret missions that the captive soldiers would embark on to trade with the locals for food and the always brought Peggy along with them on these missions.

“Throughout the whole duration of their imprisonment, with the men in a seemingly hopeless situation, just struggling to survive another day with no end in sight, Peggy’s presence boosted their morale,” Mitchell said. “I hope this award will bring attention to the important role she has played during a dark period in the Regiment’s history.”

Peggy was eventually freed along with members of the battalion following Victory over Japan Day (VJ Day) on August 15 1945. However, the soldiers refused to travel back to Scotland unless Peggy was allowed to join them on the journey home.

Peggy lived at the battalion’s barracks in Aberdeen until she passed in 1947.

PDSA vet Fiona Gregge, who also presented the award alongside Billy, said, “It is clear that the soldiers drew a great amount of strength from Peggy’s unwavering loyalty and friendship during what was a deeply traumatic time in their lives.”

“The fact the Gordon Highlanders refused to board their ship home unless Peggy could sail with them speaks volumes about the bond that was formed,” Gregge added.

“Peggy was a truly exceptional animal and she is a worthy recipient of this award,” Gregge said.

According to the Gordon Highlanders Museum, following this decision,Peggy now joins an illustrious list of animals whose remarkable actions have saved or enriched the lives of their companions. Since the award’s inception in 2001 only 123 of these awards have been made.

What a touching story and it shows how powerful the bond can be between man and animal. I was particularly moved by the fact that she was a bull terrier. Such a strong and courageous breed that just loves humans.

Peggy is a true hero for defending her fellow soldiers during such a difficult and traumatic time. The soldiers refusing to return home without her shows just how loved she was. It just goes to show that in difficult times, dogs can be there for humans and show unwavering loyalty and heart.

Throughout her time with the soldiers, Peggy also gave birth to pups. The first litter was believed to be stolen but the second litter of five were all eventually liberated after the war.

Peggy’s story, which could be found here at the Gordon Highlanders Museum site, also touches on her journey home.

“When it was time for Peggy and the soldiers return home, the Royal Air Force made it clear that they were not prepared to let the dogs board the planes. However, Major Reggie Lees stepped in and persuaded the RAF to look after her pups and let Peggy fly. In Rangoon, Peggy was again barred from boarding the ship by the Captain of the vessel which was to take them back to the UK. This caused uproar among the Gordon Highlanders and they refused to board the ship unless Peggy could sail with them. They staged a sit down on the quayside until the Captain relented and allowed Peggy to sail,” the Gordon Highlanders Museum stated.

After a period of quarantine she finally re-joined the battalion in Aberdeen. Peggy is reported to have been awarded the same four medals as the men, the 1939-45 Star; Pacific Star; 1939-45 War Medal and Defence Medal.