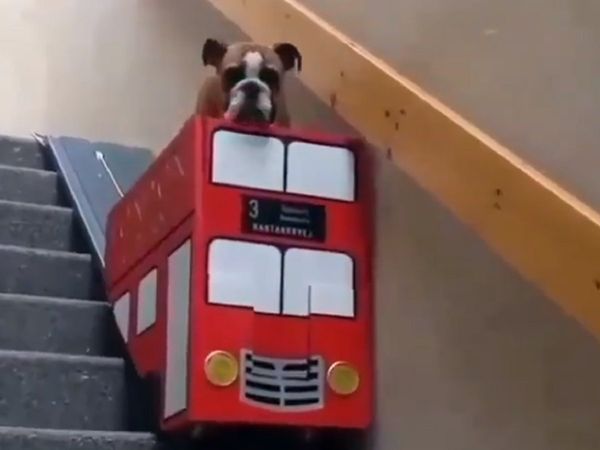 Seeing a dog on a bus is usually enough to put a smile on people’s faces but to see a much loved bulldog with mobility issues riding in his own little electric bus? That is beyond adorable.

A new video is making the rounds showing a cute bulldog with arthritis using a stairlift constructed to look like a double decker bus. The bulldog’s humans made the electric bus so that he can climb down the stairs pain-free.

The video, shared by Rex Chapman on Twitter, showed 45 seconds of the bulldog, Aase, commuting via the bus and has racked up hundreds of thousands of views. The video was first uploaded five years ago by Aase’s pet parent Pia Hjelmso.

This good boy has bad arthritis — so his hoomans made him this custom lift to negotiate the staircase.

Aase’s human Hjelmso had his friend help him construct the lift, modeled after a London double decker bus, due to the bulldog’s difficulty in climbing the stairs.

The cute stairlift shows the lengths that humans will go to in order to ensure their best buds are looked after and made to feel comfortable. The video has already prompted shared stories on social media about humans looking after dogs, particularly those who may have arthritis or other ailments.