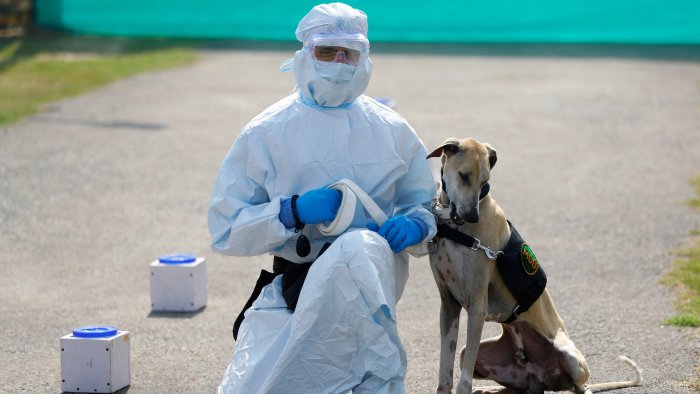 India’s army has trained a pair of dogs to detect Covid-19 by sniffing samples of sweat and urine.

According to the Times of India, the dogs are being utilized for quick detection of Covid-19 to cut down time delays associated with regular diagnostic techniques.

Dogs are known for their powerful sense of smell and are sometimes used for detecting diseases, drugs and weapons.

The Army has trained two of its dogs, a Chippiparai (a sighthound from Tamil Nadu in southern India) and a Cocker Spaniel on specific biomarkers emanating from urine and sweat samples of Covid-19 positive patients.

Lt Col Surinder Saini, instructor at the Dog Training Facility of the Remount Veterinary Corps Centre in Meerut said the dogs are pioneering canines of not just the army but the entire country of India.

He added that this is the first time canines have been used for medical detection in India, a country known for its vast population of stray dogs.

The Cocker Spaniel, named Casper, and the Chippiparai, named Jaya, were trained last year then deployed at the Army’s transit camp in Delhi in November for the screening of transients moving to the operational areas through the transit camp.

For the purpose of training, positive and suspected samples were obtained from Military Hospital, Meerut Cantonment, and Netaji Subhash Chandra Bose Subharti Medical College, Meerut, according to the Hindustan Times. The dogs were trained to sit next to a sample kept in a container if it is positive for the virus, and move forward after sniffing if it is negative.

Saini said their response time after detection is one second or less and the accuracy rate was more than 90%.

According to army vets, a concerted effort was made to train the dogs to detect the volatilome (the entire set of volatile organic compounds (VOC) produced by an organism) of Covid-19 disease by comparatory method.

“From the trials and operational deployment, it has been inferred that Covid-19 volatile metabolic biomarkers are within the threshold limit of olfactory detection capability of trained dog and can help in quick and real-time detection of disease. Keeping in mind the success of the trial, more dogs have been incorporated in training for Covid-19 detection,” a statement from the army vets said.

An official said the dogs are constantly monitored by their handlers and their body temperature is recorded in the morning and in the evening.

Dogs have been a big part of the battle against Covid-19 across the world. In the UK, last year it was reported that dogs were being trained to sniff out the virus at airports.

Other countries such as Chile have also trained and trialled dogs for sniffing out Covid-19 in humans.

In Finland, Covid-19 sniffer dogs began to work at Helsinki Airport in September for a pilot project that saw them attempt to sniff and identify infected passengers.

A German study published in July found that dogs with several days of training are capable of identifying people infected with Covid-19 while another study showed cogs can be trained to detect Covid-19 in humans by sniffing their sweat.