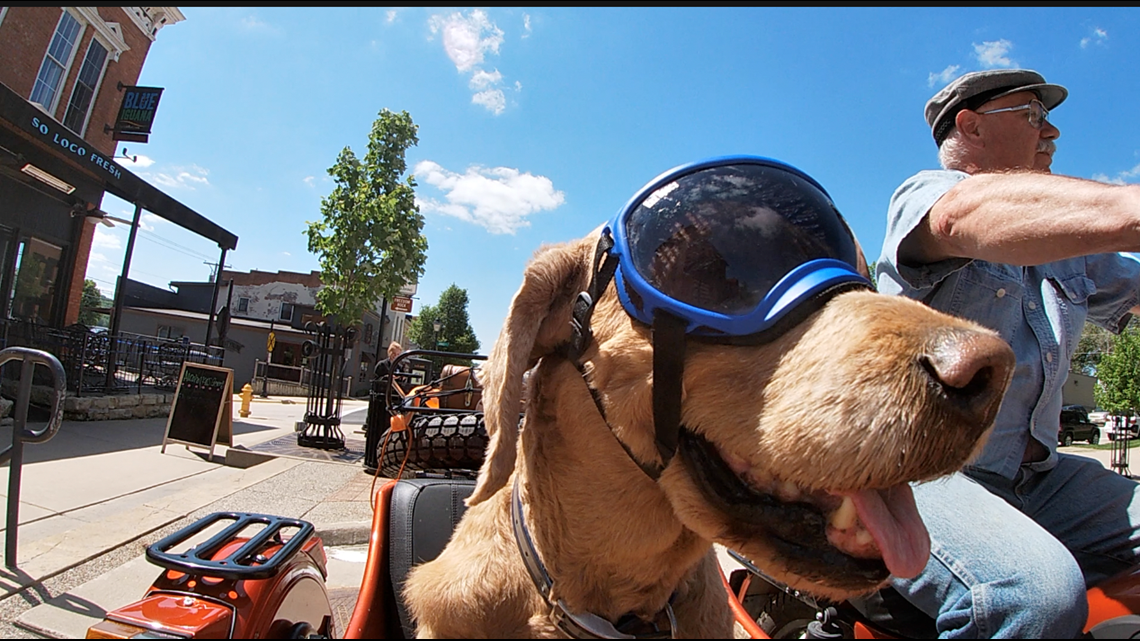 Whether it’s a spouse, a sibling, or a parent, lots of people have spent time with their best four-legged quarantine buddy.

But one man in Iowa keeps his right by his side.

During the day, Dan Campbell is a delivery driver who works the night shift. But once he’s off the road, he can’t wait to get back on it. He rides a Ural motorbike, complete with a sidecar. He bought the bike a year ago in Minnesota.

“The only production motorcycle still made with a side car,” Campbell said. “It’s from the Ural Mountains of Russia.”

But his sidecar wouldn’t be complete without his sidekick and that’s where his 10-year-old dog, Copper comes in.

The two ride the motorcycle in all four seasons. When the pandemic hit, Campbell said he parked it away for a few weeks; but like many during the pandemic they were struck with cabin fever.

“It’s perfect for when the virus is going on so we can go out,” Campbell said.

Recently, they took a trip to Kentucky’s Red River Gorge. But most days they stay local and cruise around the Quad Cities in Iowa and Illinois where many take photos.

“They’re driving with one hand and taking a picture of me and Copper with the other hand,” Campbell said. “This motorcycle when you stop for gas, you have to figure an extra 15 minutes to talk to anybody because people aren’t used to seeing a sidecar.”

A man is a dog’s best friend and that’s why Copper will always be right at Campbell’s side.

“I think part of it is he doesn’t want to be left behind,” Campbell said.

There’s no better companion for a road trip than a dog and it’s great to see this wonderful duo take on an inspiring adventure in the middle of a crisis. Campbell is giving his dog a great life and making him a part of the adventure.

It’s also such a unique travel story because of the method of transportation: a motorbike with a sidecar. This is definitely going to start conversations and will likely inspire others to want to take their dog along with them on the adventure. Campbell has said he meets a lot of people and it’s very likely that many of these people have seen this adventure and wished they can do something like that with their dogs.

What Campbell is doing is showing the world that dogs make great travel buddies and they don’t have to stay in a kennel or at home, they can come along for the ride! It’s an inspiring message and an uplifting one that is very much needed during these troubling times.

Let’s hope to see this duo on the road more once the crisis is lifted.

Rocky the Traveller said, “Riding on a sidecar is a dream. It’s one of those things that me and my human have always wanted to do! But my human doesn’t really know how to ride a motorcycle so we settle for a bicycle with a buggy, or a go-kart! But I am happy to see my fellow dog living a dream that many dogs wish they can live! More people should be like this dog parent and take their dogs with them!”