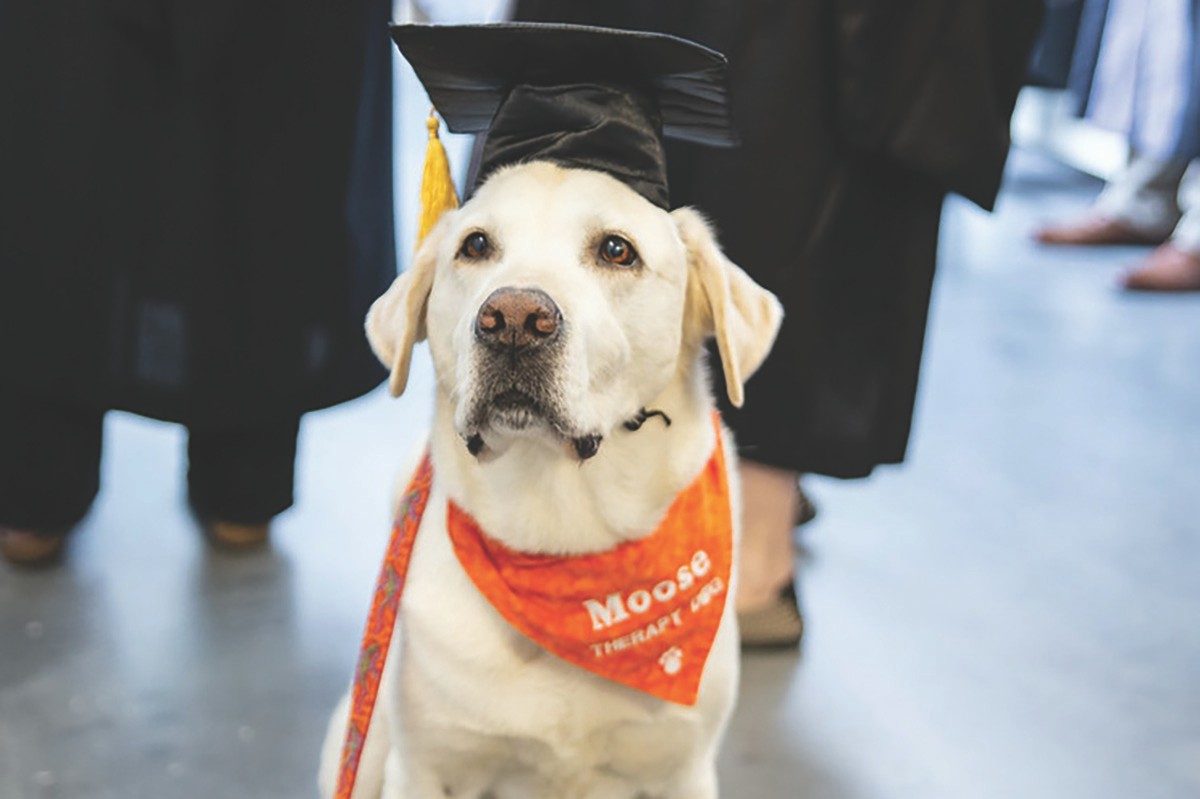 The dog is surely going to receive tons of treats and praises too.

Moose, the therapy dog, has spent a career serving and supporting the university community and was recognized in a special virtual commencement ceremony.

Moose, who came to Virginia Tech in 2014, is now one of four dogs at the counseling center who serve as working therapy animals and ambassadors for mental health awareness. He was adopted by Dr. Trent Davis, a counselor and coordinator of the university’s Animal-Assisted Therapy program.

Moose has had a challenging few months. Just a week after his latest birthday in February, he was diagnosed with prostate cancer and began a treatment regimen of radiation, chemotherapy, and other therapies.

His treatment has been managed by providers at the Virginia-Maryland College of Veterinary Medicine, a joint venture of Virginia Tech and the University of Maryland at College Park. Moose was cared for and housed by a Virginia Tech veterinary student earlier this year while receiving radiation treatments at a private veterinary specialist in Richmond.

Davis has credited Veterinary Teaching Hospital staff for providing Moose with excellent care. He continues to receive chemotherapy and has been given a ‘pawsitive’ prognosis.

Moose has returned to work with canine colleague Derek, who is also cared for by his pet parent Davis. Virginia Tech’s team of therapy dogs is rounded out by Carson and Wagner, whose humans are also staff members at the counseling center.

Moose has aided in more than 7,500 counseling sessions and over 500 outreach events in his six years at Virginia Tech. He was honored in 2019 with the Virginia Veterinary Medical Association’s Animal Hero Award. When not working, he enjoys swimming, playing tug of war, and perhaps most of all, eating.

In an Instagram post showing Moose receiving his degree, it said he humbly accepted the honorary doctorate. “We often say that we will never know Moose’s full impact. He is beloved by so many. The story of his DOG-torate has been making a splash nationally and internationally, and we are thrilled to know that Moose’s story is bringing hope and smiles to people all over the world. Moose leads his junior colleagues, Wagner, Derek, and Carson as the therapy dog team continues to serve at VT,” the post reads.