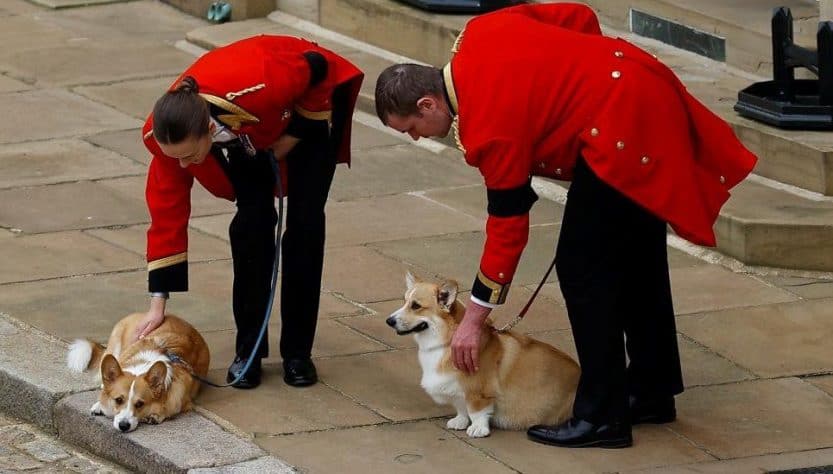 Along with her beloved Corgis, the Queen left many other pets including ponies and horses.

The Queen’s black pony Emma watched the monarch’s funeral procession pass by in the grounds of Windsor Castle, where she was held on a lead by a groomsman, according to Reuters.

At the time of her death the Queen also had two other dogs, a ‘dorgi’ called Candy, and Lissy the cocker spaniel. Prince Andrew and his ex-wife Sarah Ferguson will look after the corgis.

The Queen was enamoured with the Corgi breed and on her 18th birthday she was presented with her first Corgi Susan. Since then many Corgis descended from Susan walked alongside the Queen throughout her life.

The Queen would often have the Corgis by her side during meetings at royal houses and palaces.

John Smith, dog expert and founder of pet personalisation product website Yappy, told The Evening Standard that while dogs do not understand the concept of death, our furry pals might still feel the loss of their owner being gone.

“Dogs don’t quite understand the full extent of absence due to their owner passing away, so they don’t grieve death in a sense,” Smith said. “Instead, they suffer a feeling of loss and emotional despair which abandoned dogs would feel too.”

“These feelings can lend themselves to common and often devastating symptoms, such as whining, pacing, howling, loss of appetite, fidgeting, broken sleep patterns, anxiety, and lethargy,” Smith added. If these signs are seen in the corgis, then extra support would be needed to help them settle in with Prince Andrew.

According to Smith, due to their independent nature, it may also take some time for the corgis to adapt to their new life with Prince Andrew.

Smith added that while Muick and Sandy will not have understood that the Queen was in the coffin before them at the procession last week, they may be able to detect her scent and therefore feel her presence due to their extremely good sense of smell.

“The corgis won’t fully understand the extent of the Queen’s death, but they are very intuitive and will understand the emotion of missing someone that’s no longer there,” Smith added.

Animals have played a big role in the previous royal funerals. According to The Guardian, heads of state were reportedly somewhat surprised at the 1910 funeral of King Edward VII to find themselves behind the monarch’s dog Caesar, a wire fox terrier, in the formal procession.