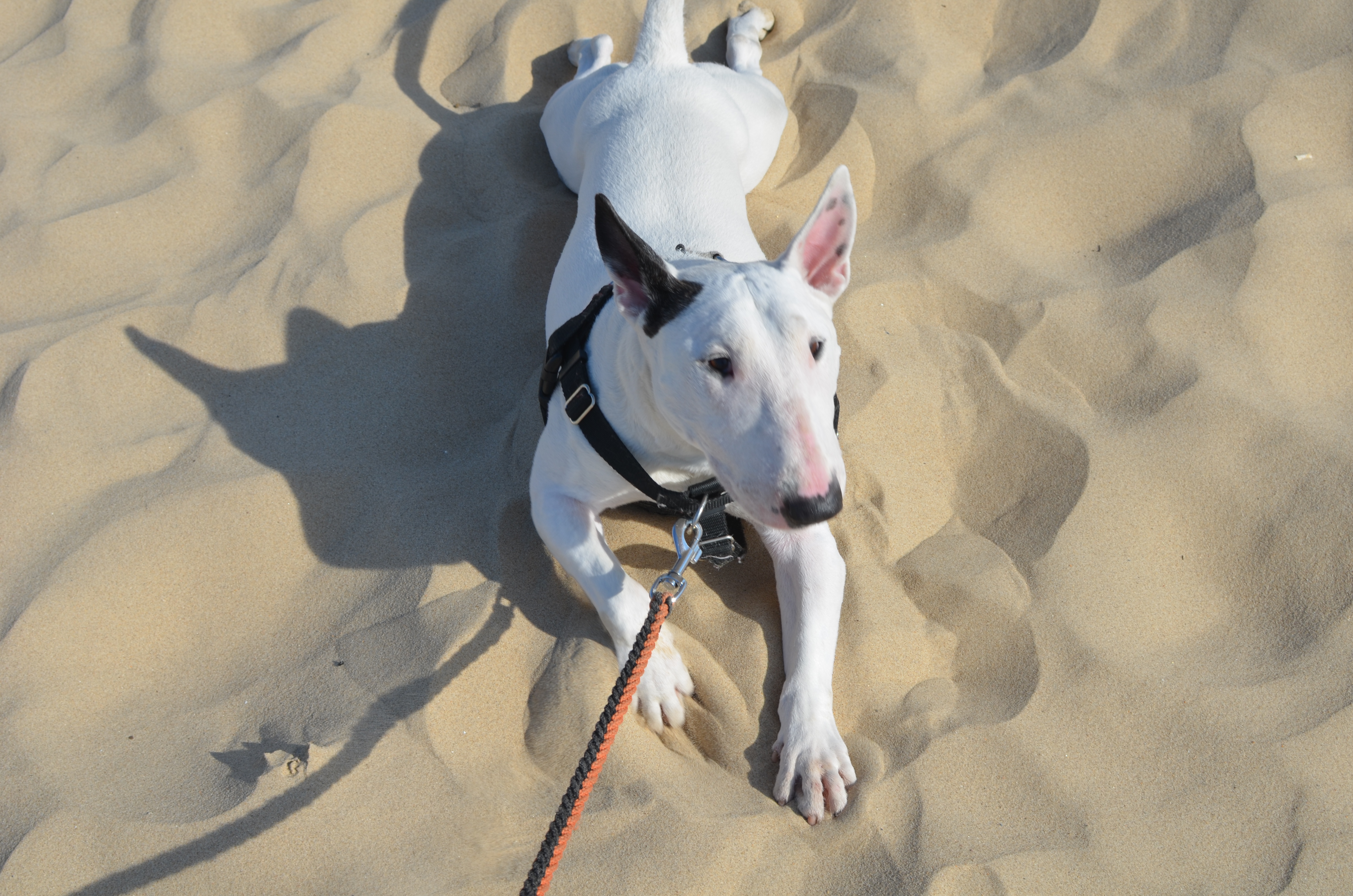 Bonjour Mes Amis (that means my friends in French), I’m on a road trip all the way to the Alsace Region of France and beyond.

After returning from the US and touching down in the UK by plane, I needed to have a bit of a rest. After my rest, my itch to travel came back and I was ready for another adventure.

Not too long ago my paws visited the magnificent Alsace region in France.

Before Danny and I could reach Alsace though we had to figure out how to get there.

Of course, since us four-legged kind are not allowed on the Eurostar or on the cabins of airplanes from the UK to Europe, we had to get creative and we didn’t have a car in the UK either to drive across the channel.

So we still had a couple of options to cross into Continental Europe: A.) Ferry as a foot passenger via Newhaven to Dieppe (a 3-hour ferry ride) or B.) Blabla car, a ride sharing service, kind of like hitchhiking but online. We went with option B, getting a lift from a friendly stranger across the English Channel via the Tunnel from Folkestone to Calais.

We arrived in Calais, my tail wagging and all, after just a 45-minute tunnel ride from Folkestone.

Our plan was to meet up with a university friend in Calais, book a car and then drive it all the way down to Strasbourg. But I’m getting ahead of myself.

Let’s see a bit of Calais. 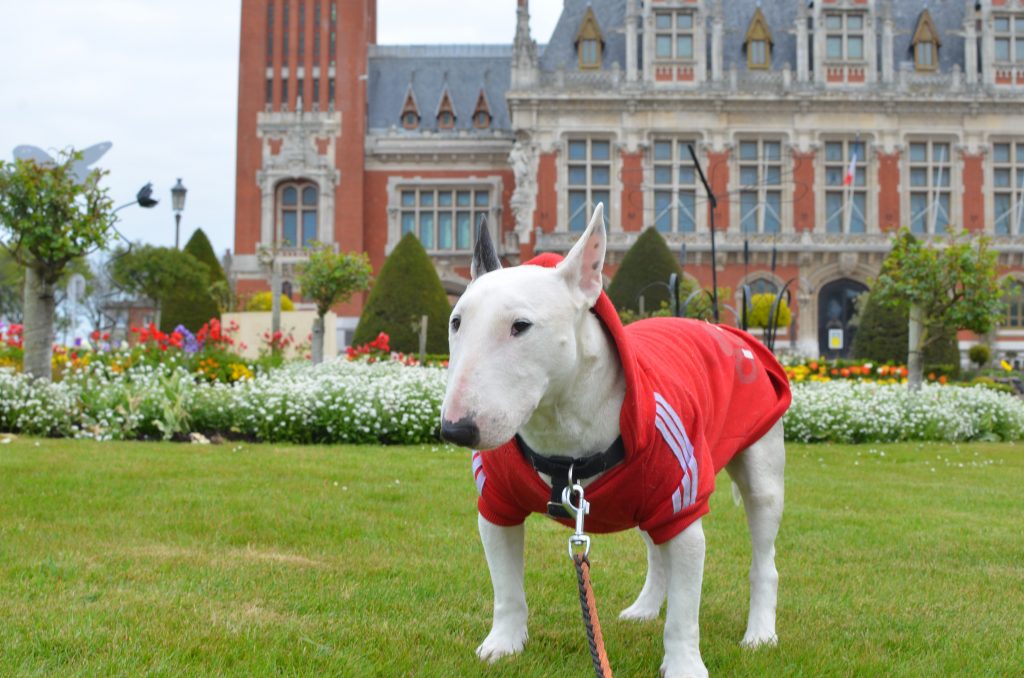 Danny and I checked in to our pre-booked dog-friendly accommodation called Hôtel Victoria not too far from the port of Calais.

After we checked in and threw our bags down we walked around town to do some sight-seeing.

The town of Calais gets millions of people coming in every day but not too many people (or dogs) stop and stay and we both knew there the town had something to offer for tourists. If not, then we could at least eat some French baguettes and croissants!

It was during the spring season that we visited Calais and not surprisingly the weather is very much like England. So it was a good thing that I brought my hoodie with me! The day was grey with sprinkles of rain that visited every so often from the clouds but we made the most of it. Our first tour stop was the magnificent Église Notre-Dame de Calais.

We then wandered about near the port area trying to figure out where all the tourist sights were. Afterward we ventured into the town center and we got to see a bit of the most famous sights in Calais. These are must-sees if you ever make a stopover here!

Our first sight was Les Bourgeois de Calais (The Burghers of Calais). Of course when Danny first told me we would go see Burghers, I began to salivate and imagined chomping into a juicy French hamburger, but alas I was wrong. Instead we came upon these wonderful sculptures. 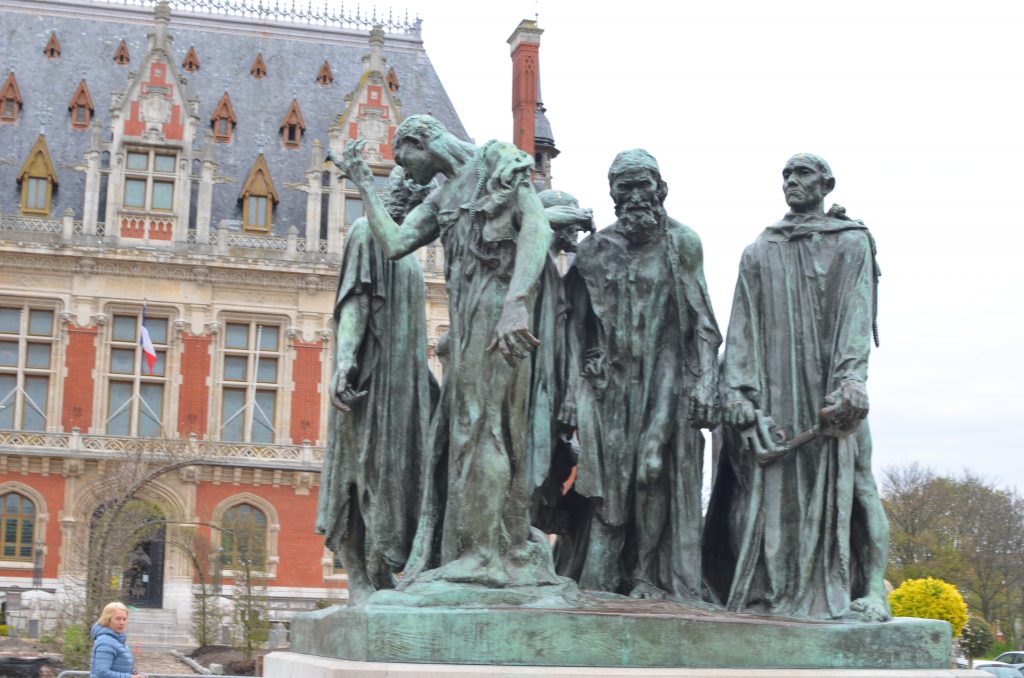 The monument pays tribute to six citizens of Calais. The town of Calais had been under siege for over a year by English soldiers under King Edward III, so the six citizens offered to die if Edward spared the rest of the town’s people. Interesting! The looks on their faces speaks volumes!

The statues of the Burghers were located in front of Town Hall, which happened to also have a beautiful garden that’s worth a walkthrough. I did a smell-through, taking in all the wonderful scents of the flowers and sneezing along the way.

The grass was so gorgeously cut and laid out that I just had to do my favorite dance. Here we go… 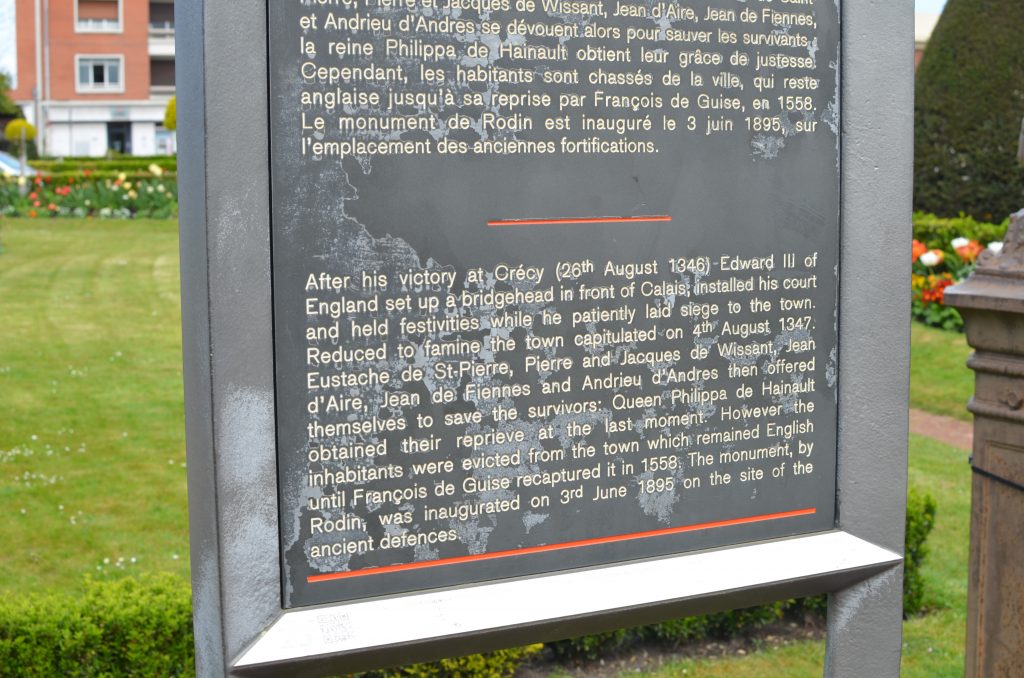 After our visit to the Centre we picked up our rental car and then drove to Calais Beach to see what it looked like. I was happy to see that it was a sandy beach! It was still quite cold and windy so not too many people were out, only the odd person with their dog.

After our day in Calais, we met up with our friend and took off south toward the Alsace region. But almost anytime we come to France we go through Calais. So we will be back!

Until next time my friends. Au Revoir! See you in Strasbourg! 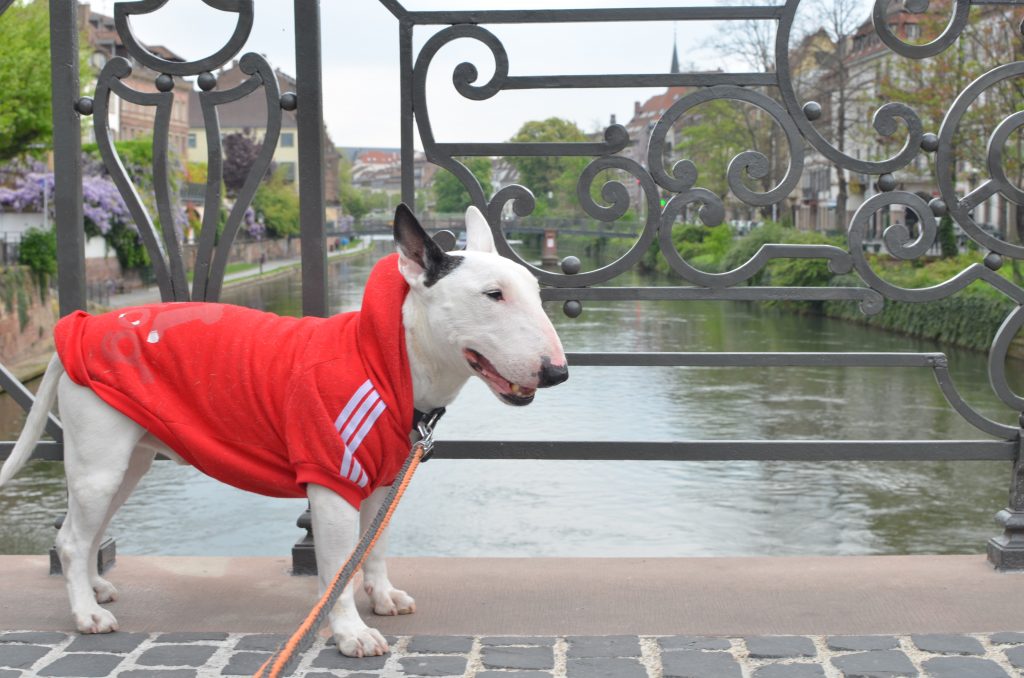