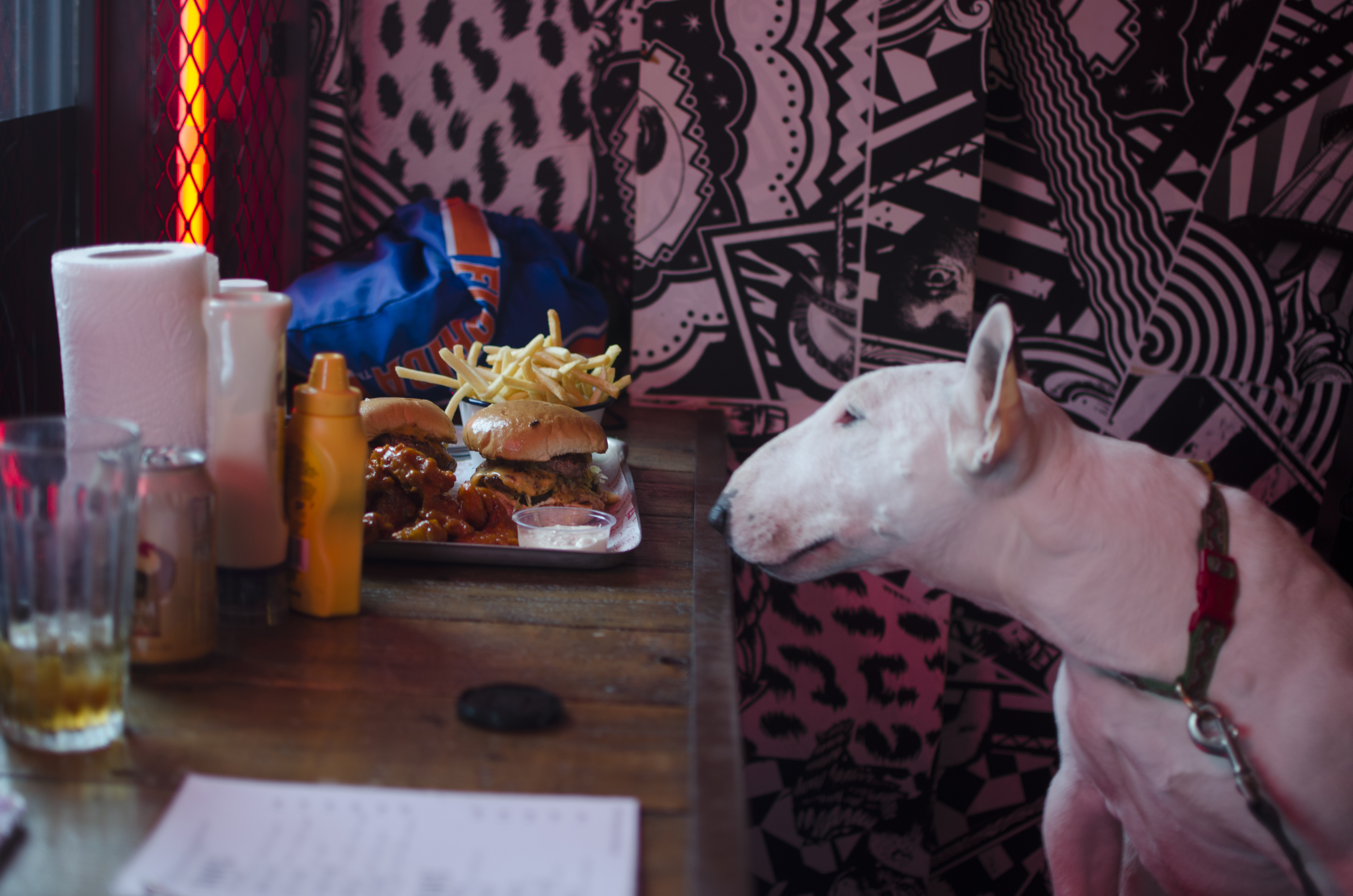 After traveling around Europe and the US for the past couple of years, I’ve decided to settle down and rest my bones – at least for a bit – and so I chose Brighton, a quirky little city by the sea where my kind is welcome in virtually every pub in every corner. It’s a city where a bull terrier like me could sit on a chair with a pint of beer and no one would look twice, because let’s face it, there are far crazier things going on in this city – and I like it!

My first order of the day in Brighton was to check out the food scene (well, after rolling around on the pebbles). Me and my best friend Danny and his friend strolled through the Laines, walked down the seaside and roamed around the Marina in search of the tastiest food that I could sink my canine teeth in. I would peer my giant shark-like nose in the entrance of every restaurant and sometimes I was welcomed, other times not so much.

On one particular day as we wandered around near the Laines and St. Peter’s Church, we stumbled upon a peculiar restaurant with an even more uncanny name. It was nestled in between a grocery store and a couple of cafes. Four giant letters spelled out MEAT and that was enough to pique my interest. The pop of neon purple and blue colors of the signage reminded me of Miami Vice. I took a closer smell and the fresh aromas lured me inside like a fish being reeled in. 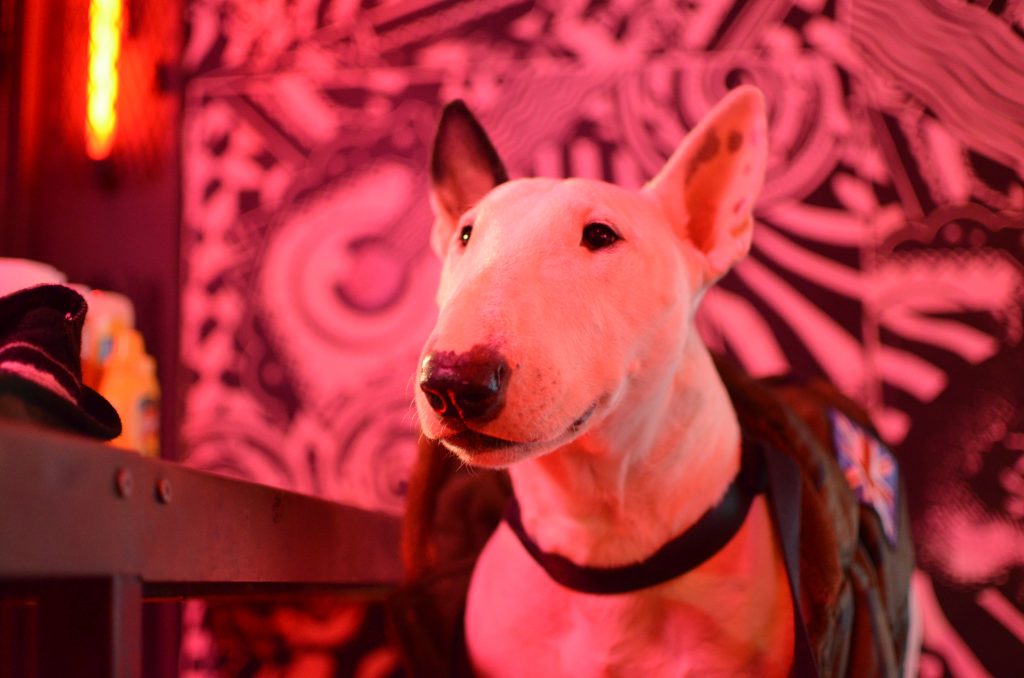 There are many things here in England that remind me of my home sweet home in America and burgers were one of them, so when we stepped in and we were told it was friendly to my kind, well, I was delighted to say the least. Ok, I was over the moon, howling like cartoon wolf and salivating like Pavlov’s dog.

We promptly entered, marching in like famished lions then sat and ordered our burgers. I was treated like royalty by the staff with some coming to take photos of me. A beautiful bubbly waitress brought me some water, but I would’ve rather she’d given me some beer in that bowl.

I studied the menu, reading each item like I was studying for a college exam. Each item sounded delicious, I was practically licking the menu as I read the items. After much deliberating, we settled on two dead hippie burgers, a side of fries, buffalo wings and deep fried mac-n-cheese. I wondered if the burgers were made from actual dead hippies since we were in Brighton, but I was assured it was pure beef. The item boasted other food items with such Brightonesque names as Monkey Fingers and Hobo Beer Cheese. I collected myself and Danny assured me that we would try other items, but all in due time. We then ordered some cream soda to get the complete American experience.

The menu lists the dead hippie burger as two French’s mustard-fried beef patties, dead hippie sauce (trademarked and I wonder what they put in there, but it tastes so good!) lettuce, cheese, pickles, and minced white onions.  As I continued to study the menu, my mind raced to the future and how I needed to return here several more times to try out EVERYTHING. Even the beers would take a couple of visits. I noted they stocked a few beers with names in the honor of Chihuahuas, St. Bernards and hound dogs, but they are definitely missing the boat by not honoring the most noble breed of all time: the Bull Terrier.

My tail wagged furiously as the waitress came in, I think some drool landed on the floor, but she simply smiled and handed us our food and drinks. 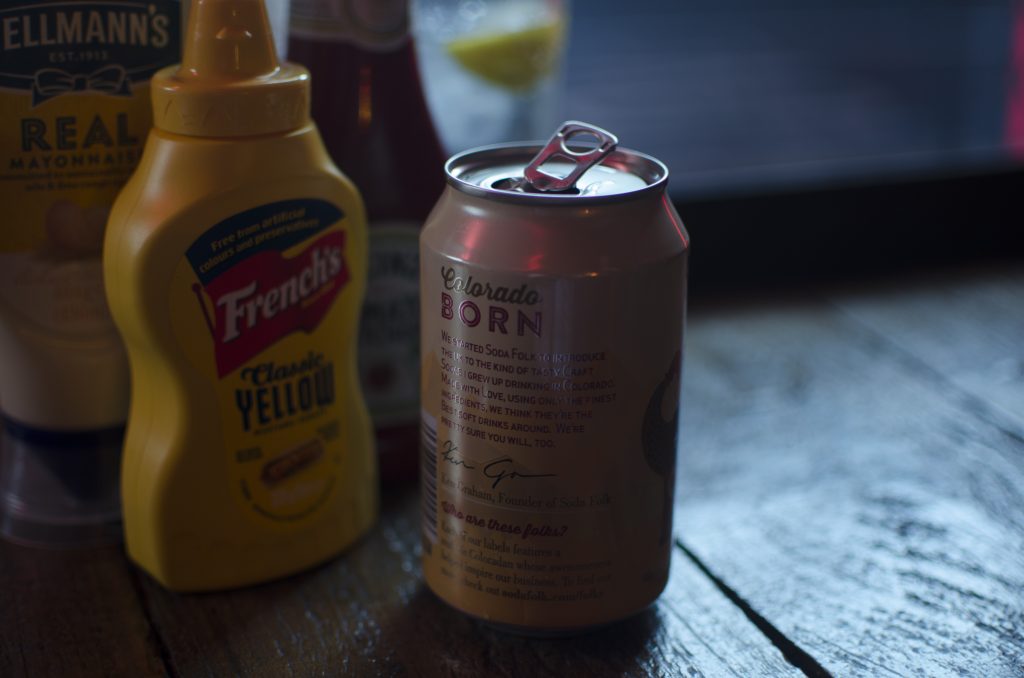 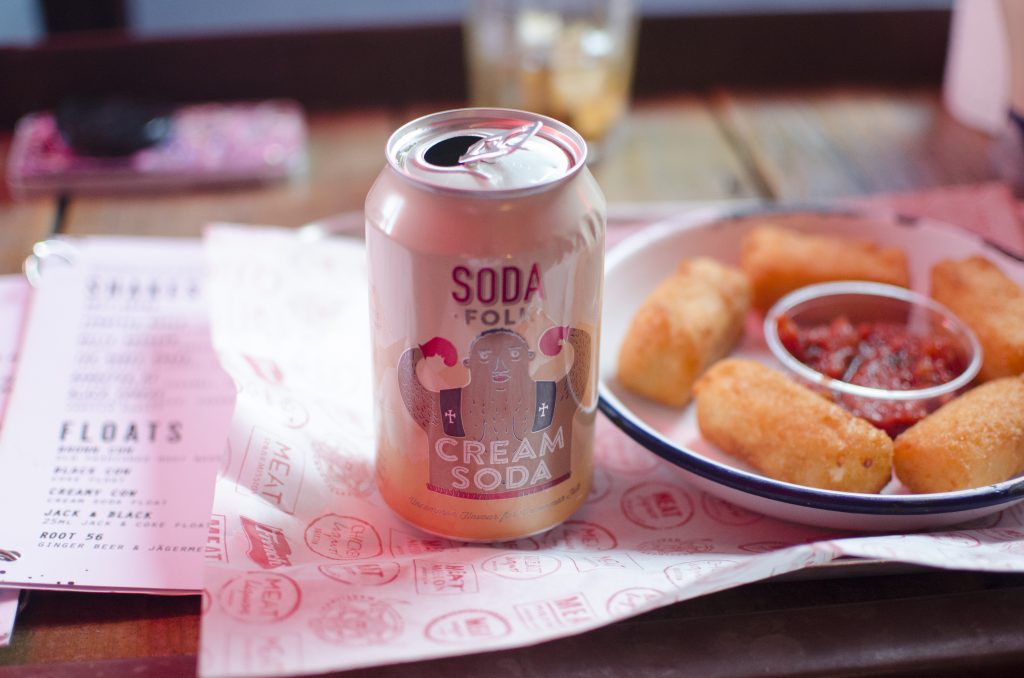 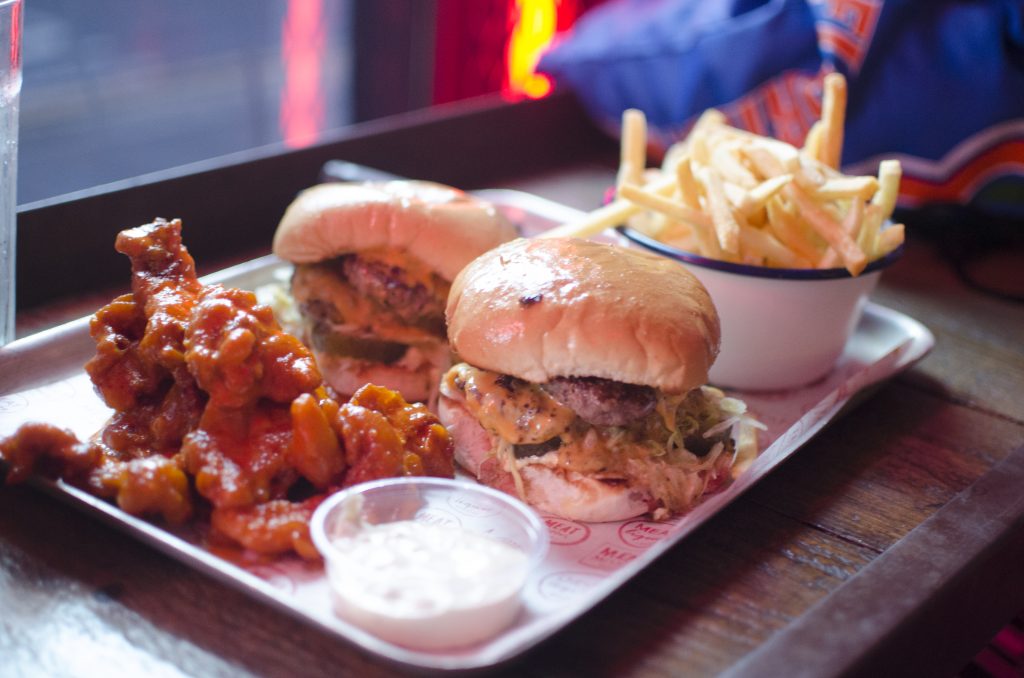 We scarfed the burgers and fries and washed them down with cream soda and then devoured the wings and mac and cheese. There was nothing left. 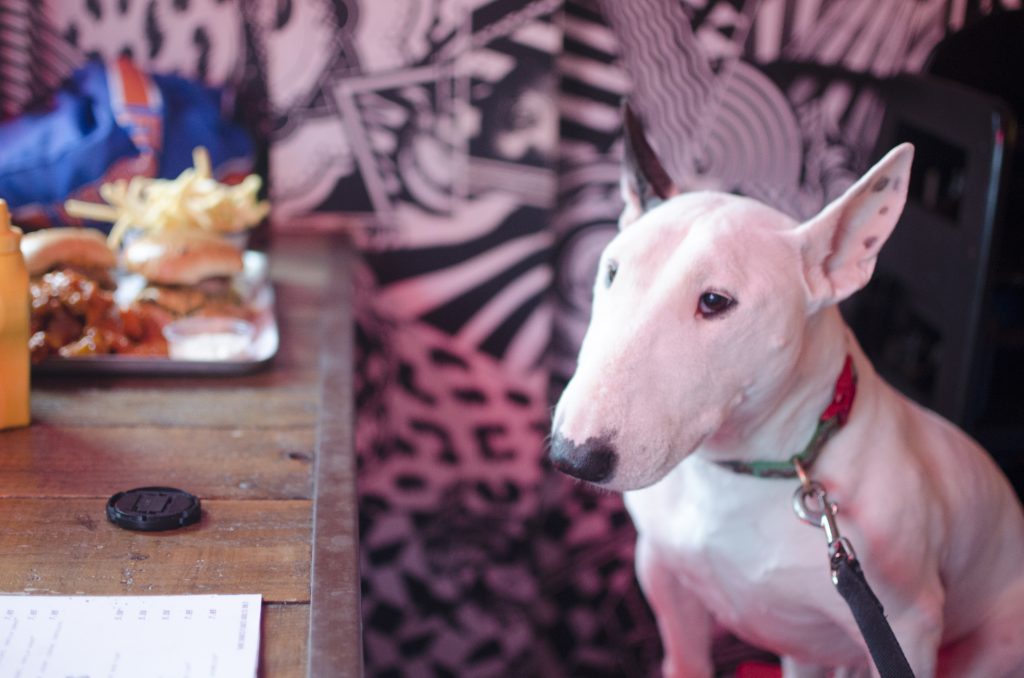 And so how were they? Well, let’s just say it left a smile on this bull terrier’s face.

I would find out that Meat Liquor has a few other locations around the UK, but if it was up to me, there’d be one in every city, so that this traveller could replenish himself with some tasty burgers after a hard day of wandering around.

Verdict: 4 out of 4 paws. I highly recommend this burger joint, which, by the way, is a lot bigger inside than it looks outside. 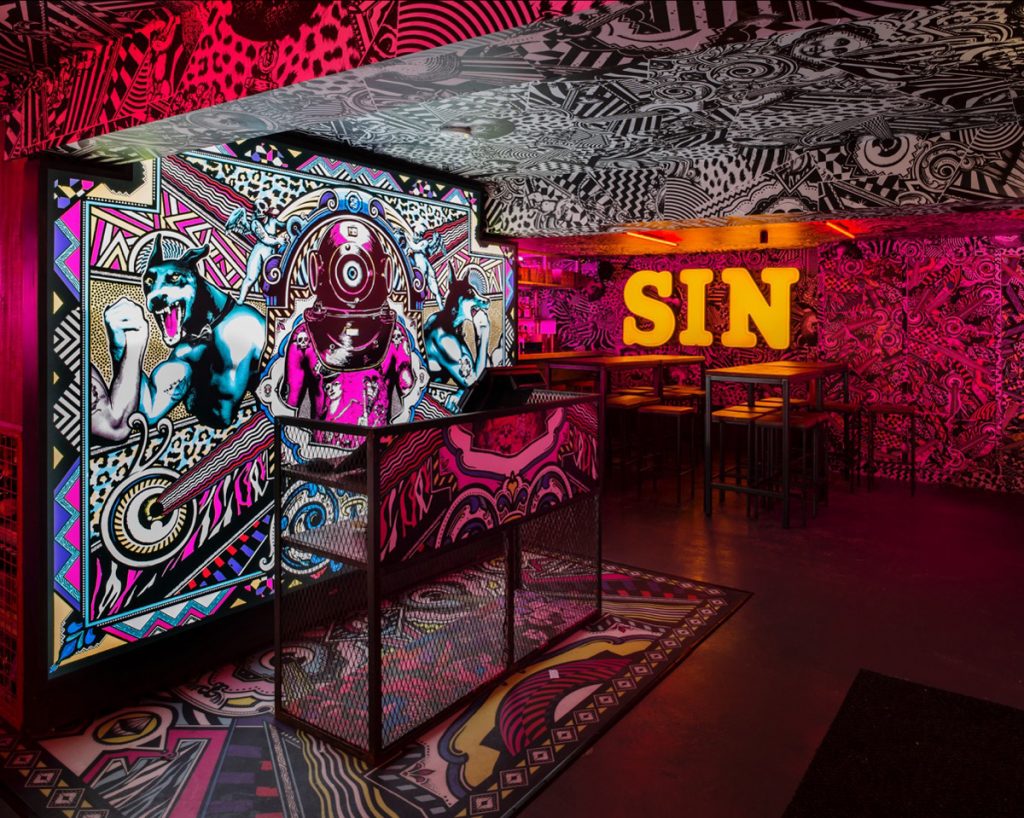 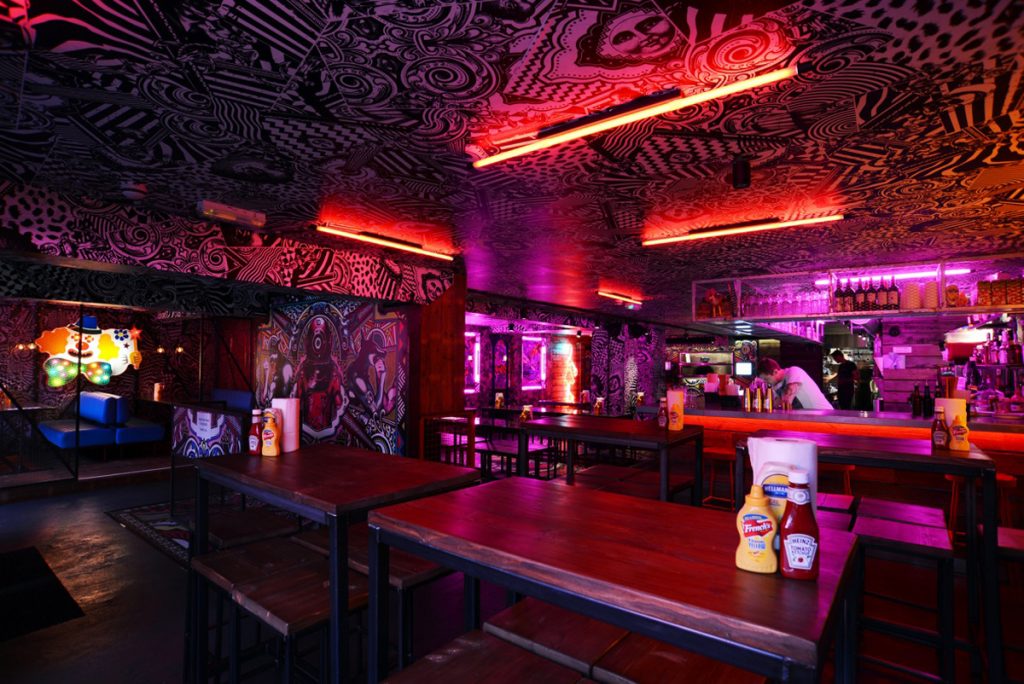