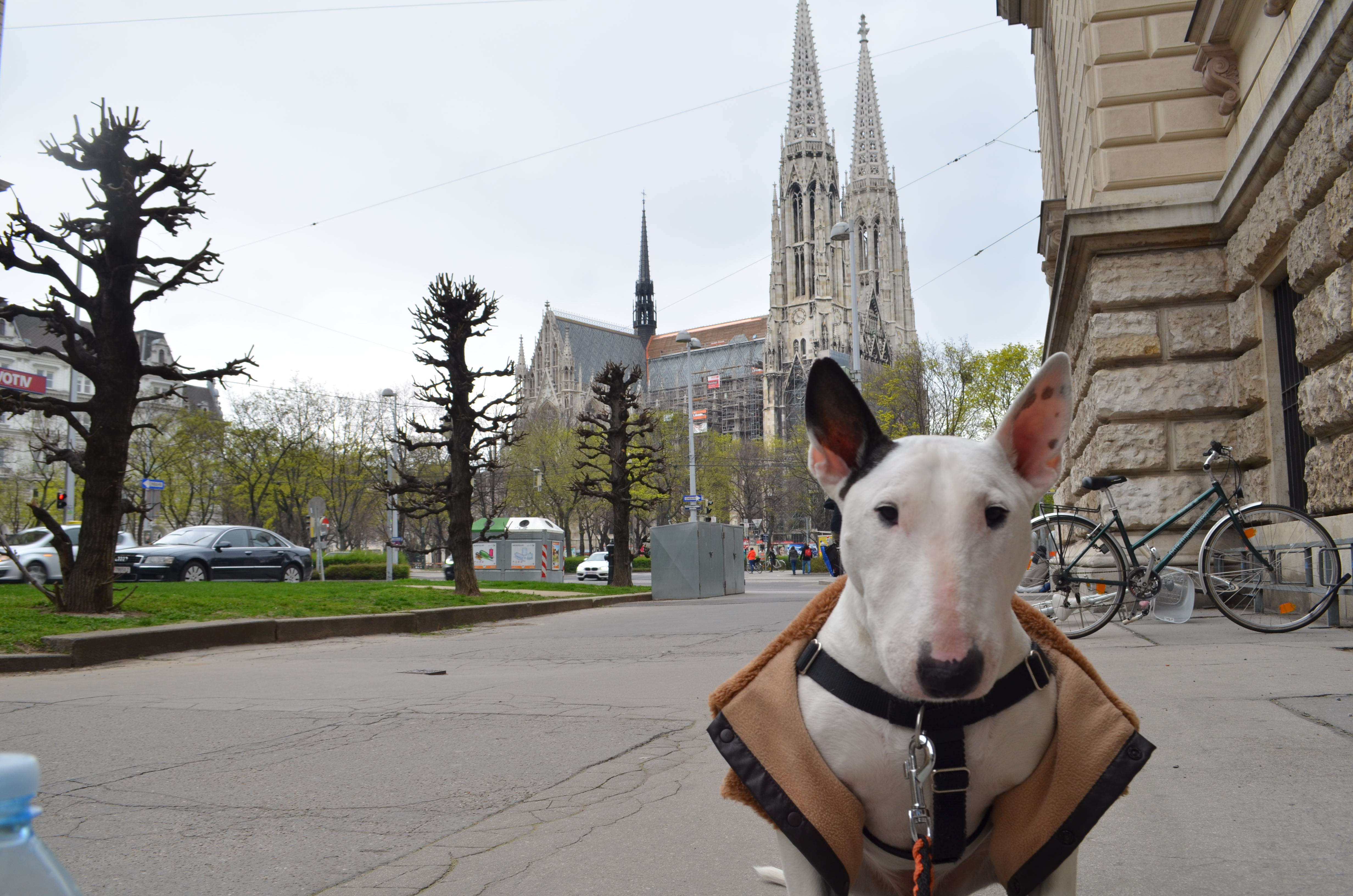 Our hotel in Vienna was a hop and a skip away from the Wurstelprater amusement park, otherwise known as the Prater. We were in the second district of the city and I had a hunger to explore all of it in the short time we had. I also had a hunger for some Wiener schnitzel.

We hopped on Vienna’s metro system which was easy to navigate even without us knowing the language. As a bonus, it was pretty cheap! I told Danny and Veronica that if we get lost, I can easily find our way with the power of my gigantic nose.

There was much to see and we only had one full day to see it all before our next adventure. But I’m getting ahead of myself. I quite enjoyed Vienna and just like Prague, it was friendly to us four-legged kind. We even got to go inside one of the nicest restaurants I had ever been to and came across a few other dogs who were also welcomed in the same restaurant.

The city’s beautiful architecture captured my attention and both Danny and I were in awe of them. It was different from Prague in many ways. Vienna’s buildings were big, majestic, bombastic and shiny whereas Prague had a bit more old world style charm with its architecture. Both cities also had millions of different smells to explore that were all very different from each other and so I took my time in getting to know Vienna and sniffed around the gardens and the buildings. I also noticed that many people kept to themselves here and I, used to being the center of attention, was not greeted nearly as much or met with as many smiles in Vienna as I was in Prague.

The Rathaus, or city hall, in Vienna had me stretching my head all the way up as far as it can go to get a look at it in its entirety. With a name like this, I expected there to be rats all over the building so that I can catch them, but I was corrected and subsequently deflated for a minute.

We took a stroll through the historic center, which is a UNESCO World Heritage Centre and for a good reason! It was a gorgeous gem of a centre surrounded by vast gardens and we walked through many historic sites and museums.

Toward the end our day in Vienna, my four legs were tired but my mind was not and I wanted to see more. So I made Danny carry me for a bit until I felt reinvigorated enough to resume my travels across the city and we saw more wonders such as the Opera House and more beautiful gardens and palace squares.

We spent a good time at the lush gardens that filled up the Maria-Theresien-Plat square and we strolled by the Art History Museum and the Natural History Museum.

Our final adventure before we made our way back took us through Stadtpark where Danny and I walked around and I got to mark my territory here. It was history-making yet again as I got to poo and pee in a brand new country. We marveled at the Vienna River and stood in awe of the Strauss Monument as well as the many other fascinating wonders and statues of historical figures in the park.

One of the big landmarks that Danny wanted to see was the statue of none other than Wolfgang Amadeus Mozart. On the way back to the metro station we stopped by to take a look at the brilliant statue. There were tons of tourists who surrounded it but luckily with the gloomy weather, they came and left quickly and I was able to snap a quick one with Mozart.

After the day spent in Vienna we left before it rained on us and we spent the night near our hotel close to the Prater and had dinner there. The next day we set off to Budapest and that’s the next adventure I will take you on.

Farewell for now my fellow travelers!