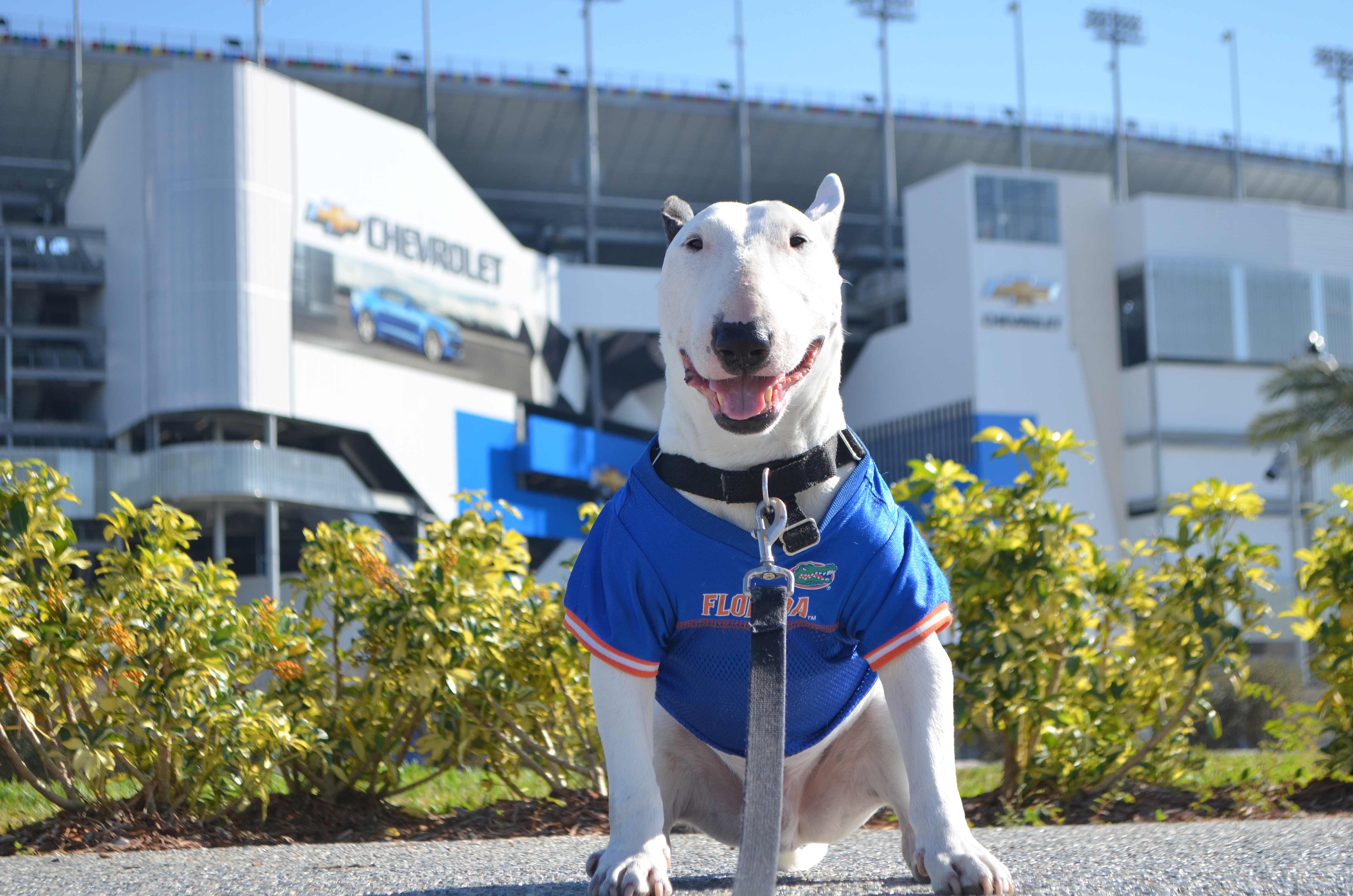 As a traveller who’s been on the road a lot, I’d always imagined that I would make quite the stellar race car driver. So I was excited to learn that we would be visiting Daytona Beach, home of the world-famous Daytona 500.

We paid a small visit to the outside of the Daytona International Speedway, a massive race track. It was the most perfect sunny day to visit too! I posed in front of the massive stadium with my Sunday Florida best: a jersey I had acquired during my visit to the University of Florida campus.

We drove over to the beach front and took a stroll down the boardwalk and the pier. It was a nice and warm January day when we visited.

During the winter, the beach still gets visited by tourists but it’s nowhere near as busy as it is in the summer.

It felt great to walk up and down the boardwalk in Daytona Beach without shivering. We were already getting used to the weather in England and the harsh winters that make beach strolling a chore over there. But here, it was pleasant.

Once my paws hit the warm sand, I was ready to rock and roll! I love rolling on the sand!

After a roll in the sand we finished the morning visit to Daytona by visiting the Boardwalk amusement park. They had roller coasters there and bumper cars, but it appeared to be quite empty.  I guess my thirst for racing had to be put on hold for now.

On the way back from Daytona we stopped by the historic Sanford district for walk around the lake.

As we got back on the road, I grew hungry so we stopped by the world famous burger joint Checkers! It was a quick restaurant where there were no inside tables, only outside. This was perfect because every restaurant we had visited throughout my trip to Florida did not let me inside. I’ve grown too spoiled in Europe!

That Checkers burger was delightful! I felt re-energized so then we headed to International Drive in Orlando to wrap up the day.

I was surprised to learn that Orlando had created its own London Eye. It wasn’t as big as the London Eye, but it was still impressive!

Unfortunately, this little slice of Orlando is inaccessible to dogs, but the security guards were nice enough to let me take a photo and roll around on the grass. They had a good laugh too.

Our day turned into night, but I wasn’t ready to call it quits.

Our long day that started in Daytona finished at the store which is known for its famous bull terrier!

We stopped at the Target store near where we were staying to buy a few things and I wanted to meet Bullseye, the Target mascot.

I met the little Bull Terrier known as Bullseye. He was a handsome chap, just like me!

What a wonderful adventure it was to explore a little bit of Florida, including Daytona, Orlando and Sanford.

While living in the UK and traveling Europe I’ve gotten used to entering restaurants with my human, which was not allowed in America, but I learned that all the American people still have much love for dogs over there. Now I just hope that in the future when I visit, they’ll allow me anywhere. Even Disney World. A bull terrier can only hope.

Thanks for reading about my Florida adventure! I am now going back to Europe! See you on the next one!