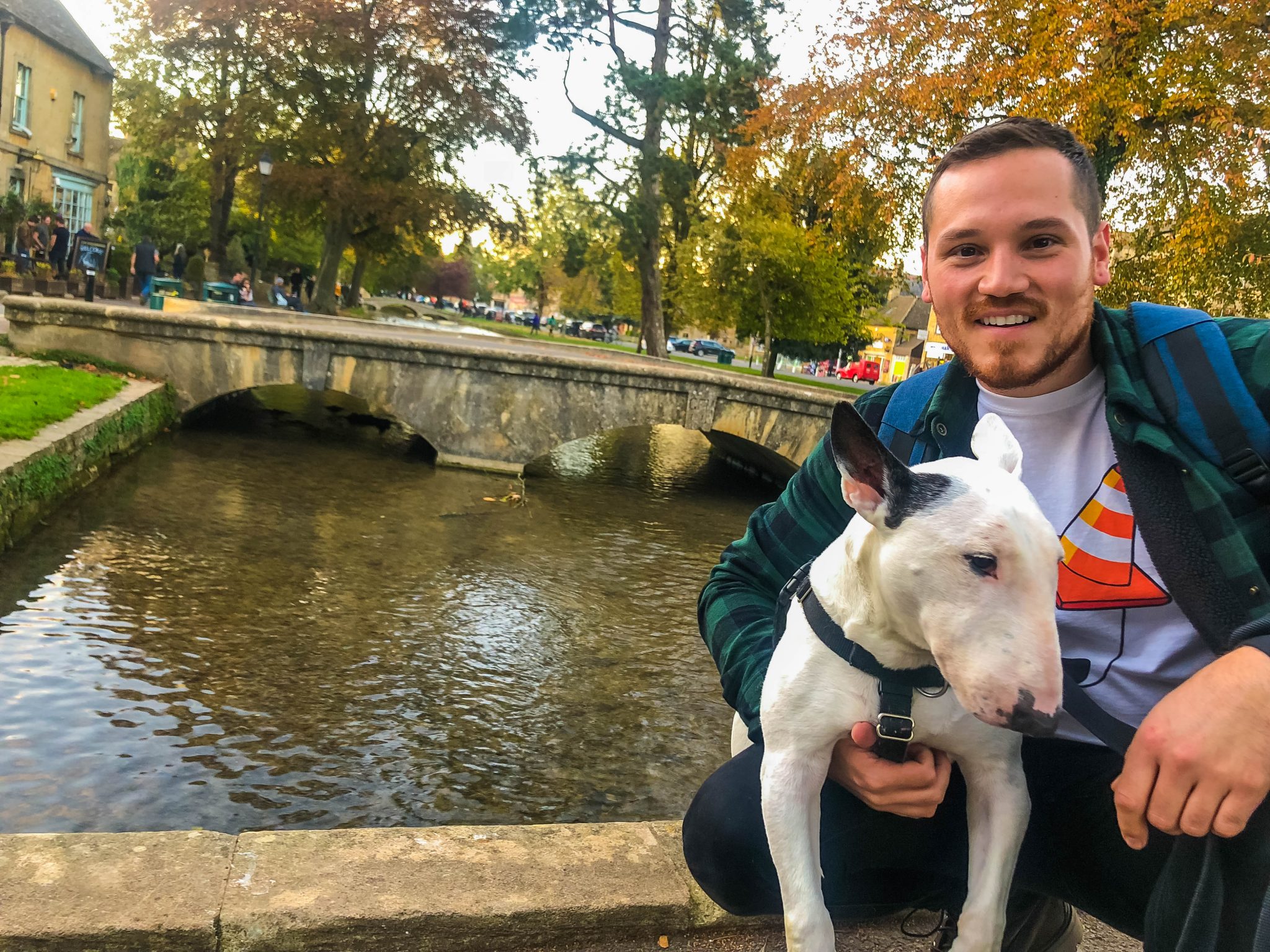 I’ve heard so many great things about the Cotswolds, but mostly I’ve heard about how that’s where many of the rich people in England live! Naturally, my human and I were curious about what exactly is so special about this place.

As we last left off on our British Road trip, we touched down on the Lake District and spent a day there on a steamboat ride. After that we recharged our batteries at a hotel at Stoke-on-Trent, but we mostly caught up on work and relaxed there.

After that we drove down to the town of Cheltenham, right by the famous Cotswolds. Our stop here would be for an entire day!

We did some research on the Cotswolds and discovered that the entire region is made up of gorgeous and picturesque villages filled with spectacular stone architecture.

Seeing as we had one day to explore it we thought we would spend it in a village with a river, and that’s how we ended up at Bourton on the Water, also known as the Venice of the Cotswolds and located right in the heart of the Cotswolds. A perfect place for my four little paws to visit!

Tourists at Bourton on the Water

My human and I were excited to do a bit of sightseeing and discover the ins and outs of this beautiful little English village.

We found ourselves on the high street, just two tourists, dog and man, and right next to the River Windrush! I gotta say I was pretty amazed by this little village’s many little gift shops and on this particular day there we found the village to be pretty busy.

There were many pubs, gift shops, museums and even a model village. We only entered a few shops out of curiosity and found that many of the shops were pretty dog friendly. We even ate inside a nice Italian restaurant. That’s right! Inside! More on that later! 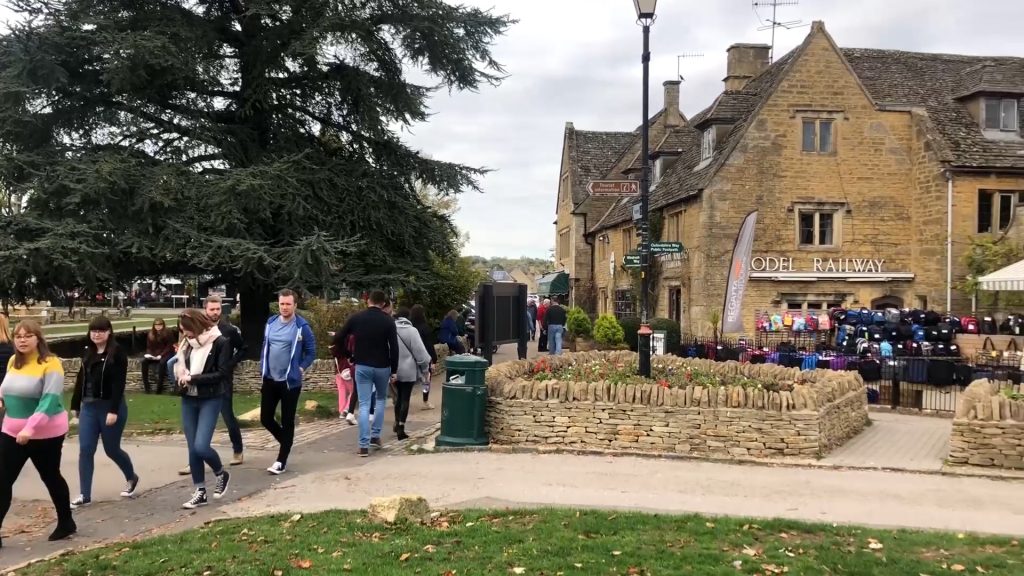 After walking up and down beside the River Windrush, it wasn’t too long before we wandered off the beaten track and onto some roads which was cool because we then found ourselves admiring some of the most beautiful cottages in England. Many of the buildings looked straight out of a tourist brochure and featured architecture that would make anyone stop and take endless photos. And indeed we stopped and stared many times (and took photos) at the gorgeous bed and breakfasts that peppered the village.

At one point my wet nose led us to a footway though I wasn’t quite sure where it was going, but once we saw how the path turned muddy we turned around and went back to the High Street and found some other village gems, including the Cotswold Motoring Museum.

We continued to travel around the village, with no particular itinerary, just going wherever our feet took us and on the way passing through many more charming little shops. We spent a lot of time admiring the small stone bridges. We even met a few nice people who offered to take our photo. One of them was an elderly lady who was in love with my breed and was delighted to meet me! Glad I could make her day!

After a bit of wandering we rested on a bench with a close-up view of the River Windrush and its inhabitants: some swans and ducks.

The river and its bridges are why they called it the Venice of the Cotsworlds and it’s what really brought me and Danny and probably many of the tourists out here on Bourton on the Water.

The bridges were small yet superb. I tried to get a closer look at river and its ducks many times and just like in that old tale where the dog stared at his own beautiful reflection, as so did I, until Danny pulled me up.

There are five glorious little bridges in total on this high street with some built in the 1600s. Me and Danny agree that it was definitely worth a visit to see them.

We then took a few river selfies and before you know it, the sun was beginning to set. These autumn days go by quickly don’t they? Also, it was time to eat. My tummy was rumbling! 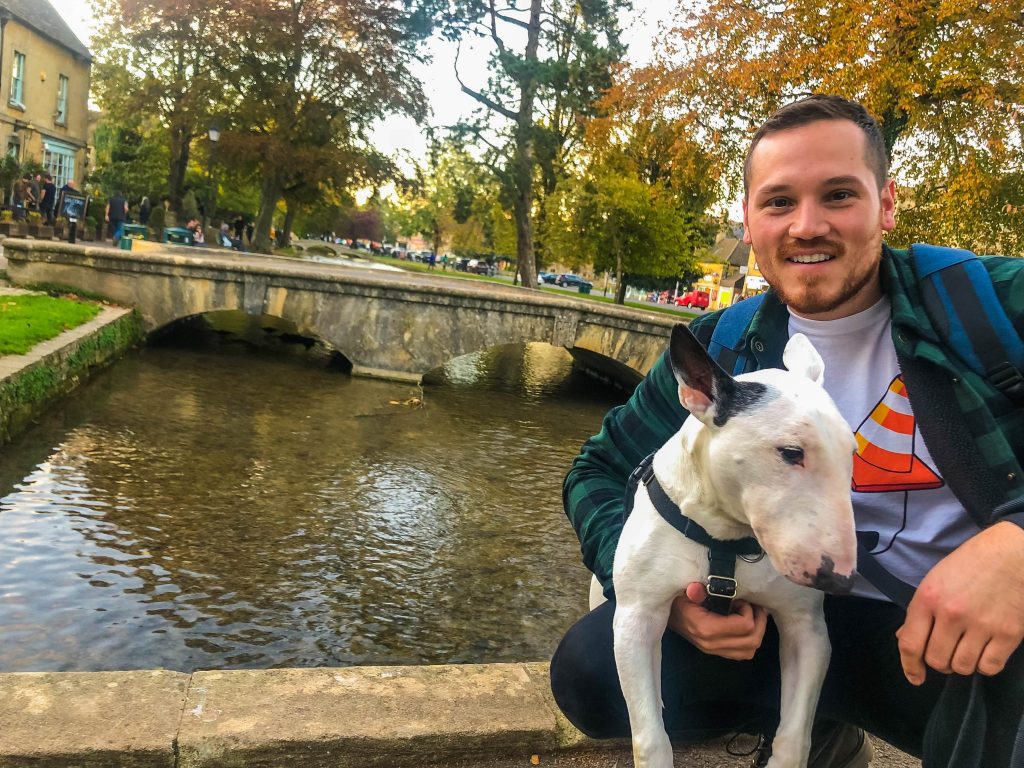 We found a nice dog-friendly Italian place called L’anatra, which literally translates to duck from Italian. So I guess the village really is taking its Venice nickname seriously!

Danny had some fish and he did share when no one was looking. He then had a coffee for our half-hour ride back to Cheltenham. Overall, I recommend this restaurant if you have a furry buddy as it has a delightful ambience and best of all, it’s pet-friendly! As we found throughout the day, many other pubs and cafes were pet friendly as we saw families having pints and teas next to their pooches.

Bourton on the Water you were a lovely little village and next time we will see more of the Cotswolds but now it’s time to hit the road and then make our way southward where our next adventure awaits: Oxford!

Thanks guys! Check out the video blog below to see our complete adventures at the Cotswolds: Bourton on the Water! We highly recommend this place for a weekend getaway as we saw tons of four-legged friends hanging around the village!