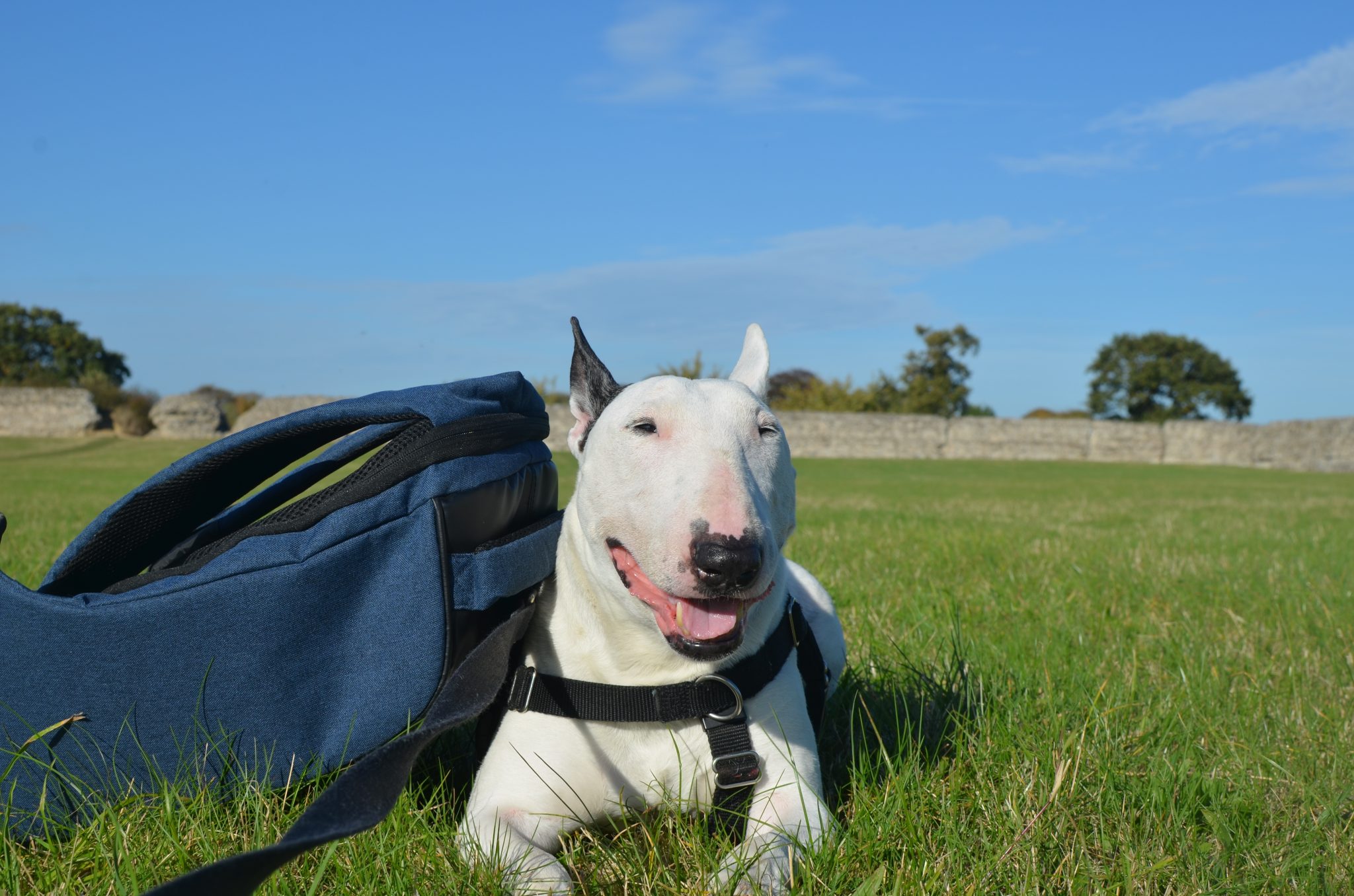 Hi guys! it’s your favorite traveling bull terrier and I’m doing one last adventure in the Norfolk region of England before I make my way up to Leeds! 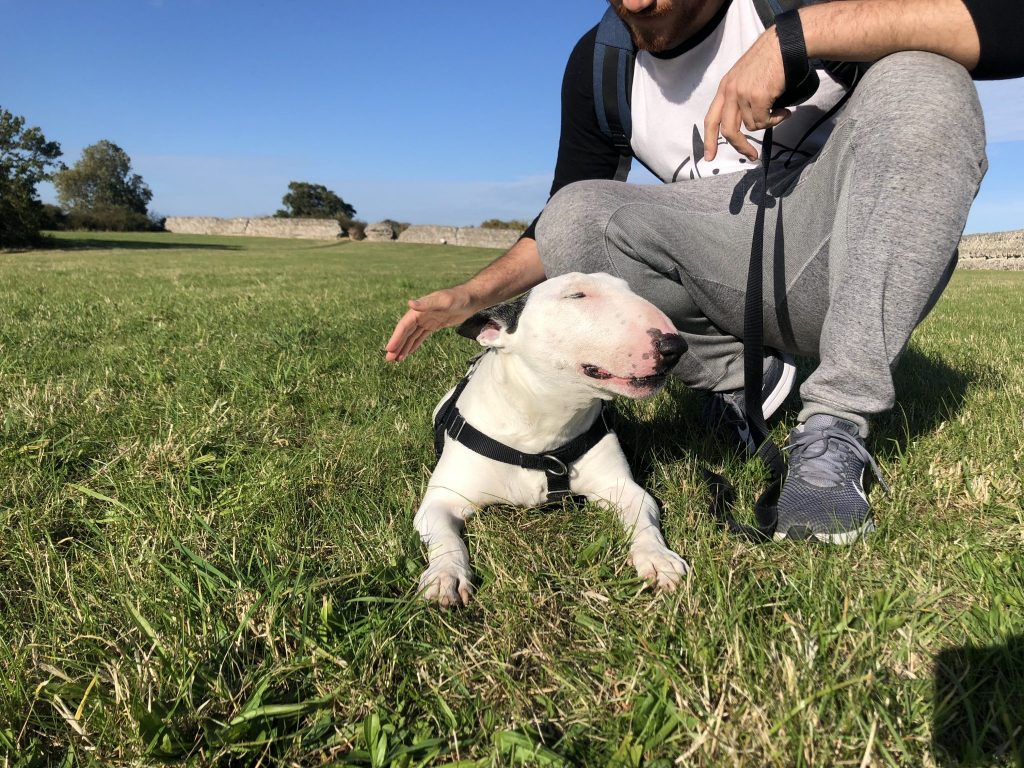 During our entire time at Yarmouth we had kept hearing about this wonderful place called the Broads. When I first heard about it I thought maybe they were trying to send us to a gentleman’s club or something like that but we soon found out it was a beautiful natural park (so not that kind of broad). It was huge and mostly made up of rivers and lakes. The entire park area is about 117 square miles and it has over 125 miles of navigable waterways. Best yet we could easily travel to The Broads as it was only a 10-minute drive from us!

Being that the park was so big, we could only see a small slice of it and we chose to visit Burgh Castle and explore The Broads from there!

So we hopped into our car and drove from Great Yarmouth to Burgh Castle.

When we parked we were met with a trail that told us we were about a mile or so from the castle, but just a few minutes after walking we ran into what I first thought was the castle.

I thought to myself, ‘that mile was really quick, surely my four legs are not that fast’ and I was right, it wasn’t the Burgh Castle, instead it was the Burgh Castle Church of St Peter and St Paul.  So the castle was still about a mile’s walk from us.

A mile went by pretty quick! 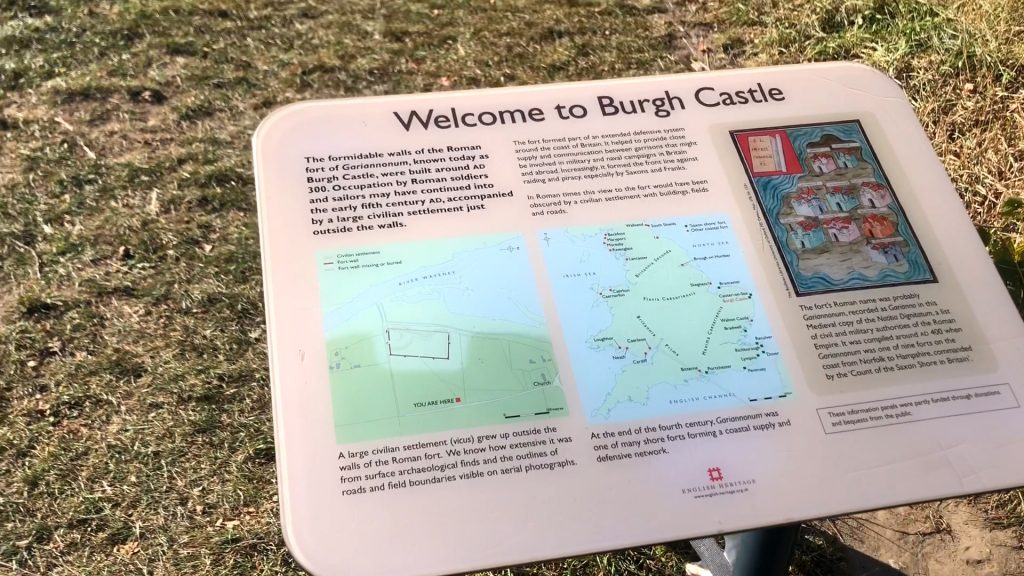 It was a fort! 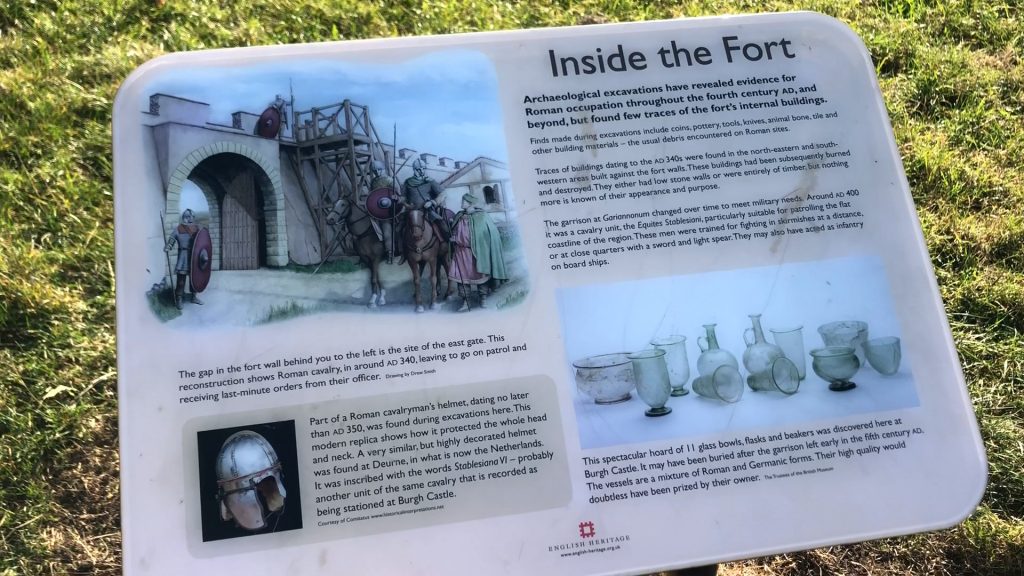 The fort dates back to the 3rd century and was built as part of the Roman network of coastal defenses. Incredibly, three of its massive stone walls survive!

Even more incredible was that we didn’t google this place beforehand. We expected a big traditional castle. Usually we try to google a place but we didn’t do much research so this was a big surprise for us!

The entire fort was large and there was a vast amount of space! If this bull terrier wanted to run around without a leash then I would run out breath before I would be able to sniff all three of the stone walls!

After running around for a bit within the fort’s walls we traveled a bit further up to a hill and just over the hill, on the horizon were the Broads!

After a mile of walking and then exploring around the fort, we were pretty knackered (tired in British English)! But we pushed on so we could make it to the river.

Our trail curved as it reached the river and we were met with a small beautiful bridge. With the sun shining on it, I felt like I was in the Shire, the land of the hobbits.

We then walked back toward the fort but took another turn and followed a path which curved around the castle so we saw a bit more of the rock formations of the fort from the outside.

Since we were already back at the fort we decided to walk in a bit and take a few more snaps of the castle.

We were pretty tired but we decided to do a bit more exploring around the surrounding areas and see if we missed anything. It was more beautiful green fields and even some farms which had a few horses and some dogs.

After more wandering around we turned back and walked the mile again toward our car. So yes, we were pretty exhausted!

While we only got a taste of the Broads it was enough for me to want to return and explore more of it, perhaps closer to Norwich and maybe we can take a boat across the rivers. That would be cool!

But for now we are saying goodbye to the Norfolk region as we make our way up to Leeds then to our Bull Terrier Walk which I can’t wait to go to! Stay tuned for that!

Check out our full Youtube video for a more immersive experience of the Burgh Castle and The Broads! You can practically feel the winds!