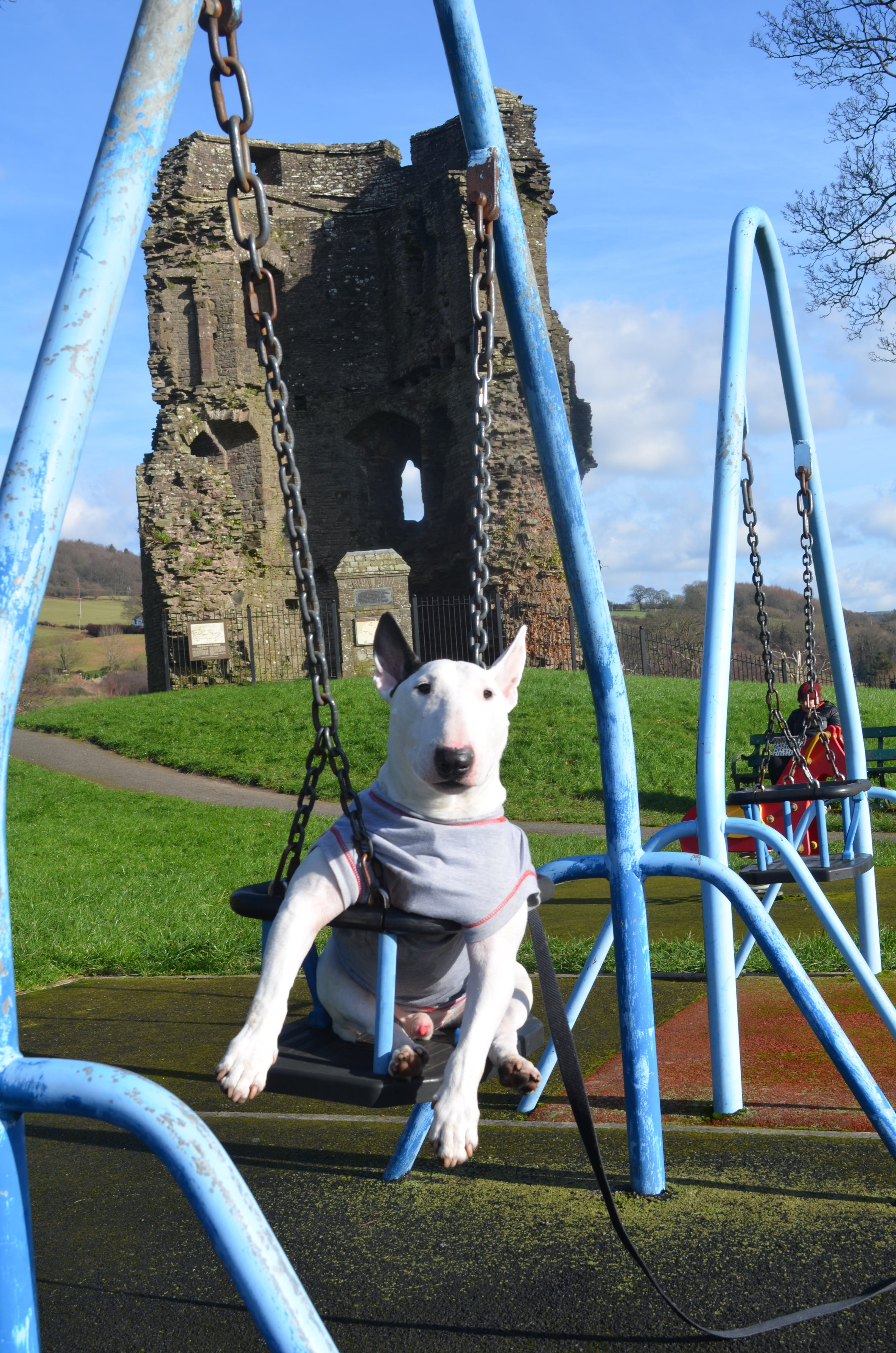 It took one year after living in the UK to visit Wales but the wait was well worth it. We were in search of spectacular castles and coastlines.

After much planning Danny and I took a small road trip over to the Brecon Beacons area and found ourselves in the county of Powys, more specifically the town of Crickhowell and the village of Tretower.

I was delighted when we first crossed the country line from England into Wales and we were greeted by road signs and giant letters on the pavement that spelled ARAF, which meant ‘Slow’ in Welsh. Did we heed to the rules of the road? Well, I am a bull terrier and we are a stubborn lot. So no.

The rolling countryside welcomed us with open arms and vast fields of flawless green. Sheep littered field after field and they all looked so free. I was beyond excited and wanted to join the sheep and frolic among the herds. But Danny thought I would eat them so he didn’t let me run free.

Along our road trip we stopped every once in a while to take in the scenery and bask in nature. As well as to pee.

I stuck my head out of the window to see the beautiful roads and take in the fragrance of the forests and the meadows. We then made it to the small town of Crickhowell and wandered around town with the goal of finding our first castle.

My first impression of Wales was that it was a friendly town. The Welsh humans smiled at me and I smiled right back.

Our next goal after exploring the small town was to look for the Crickhowell Castle.

We walked through a vast field to reach Crickhowell Castle. Despite the castle lying in fragments, it was still impressive! The castle bailey, or the outer wall of the castle, is now occupied by a fun playground!

There was a nice trail around the ruins that led up to a hill that overlooked the town. So after sniffing around the castle and marking my territory, I scaled up the hills with Danny in tow.

After looking upon the town of Crickhowell and taking in all of its magnificence, we headed back down and drove toward the Tretower village. But not before we discovered that I had a bit of an accident!

We set off in search of our second castle of the day in Tretower and it took us a while to find it as it was on the outskirts of the village. But we did and I spotted some more sheep. They ran away when I tried to approach them. I just wanted to be friends. We share so much in common. We have four legs, white-ish fur, similar faces! I just want to be friends.

Sadly our visit to the castle was cut short for a few reasons. One it was closed and two we could not go near as all the grass around the castle was wet. Nevertheless it was still impressive!

So what was our next move? To see another castle of course! We planned to drive toward Newport to explore another area of Wales but before we did, we took a detour to see a bit of the historic River Usk.

We returned to the town of Crickhowell and stepped down to see the river up close. It was amazing! While the weather wasn’t the warmest we did feel cool breezes near the river and around town. I also made quite a few friends with more of the locals who had said they hadn’t seen such a handsome dog like myself in a long time. I wagged my tail quicker than a sheep running from me and though I couldn’t speak Welsh, the locals understood my language.

As the sun lowered and gave way to the night we hit the road toward Newport to see another side of Wales. I will take you there as well as the gorgeous Welsh town of Penmaenmawr (say that ten times fast!) on the next one! See you guys!