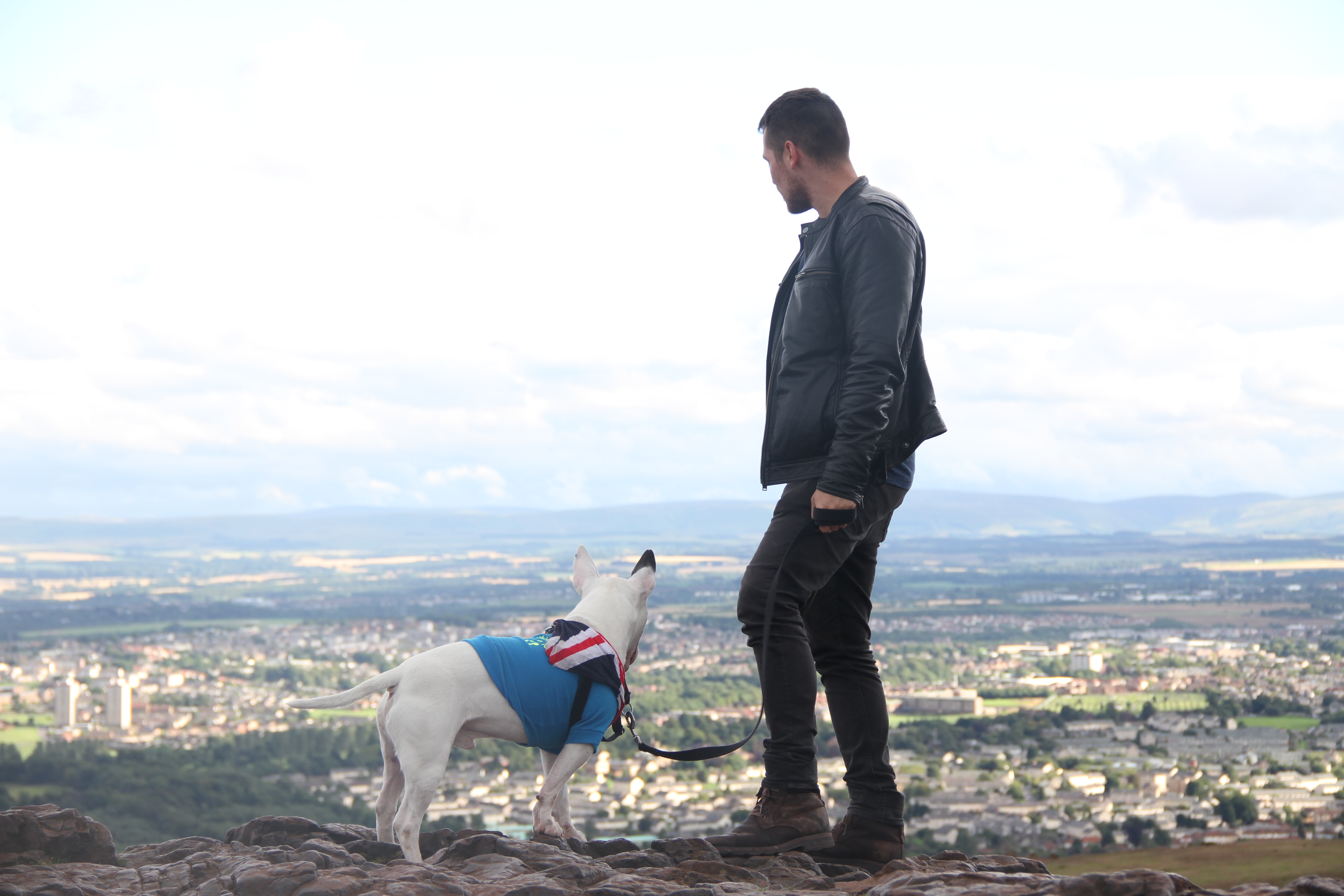 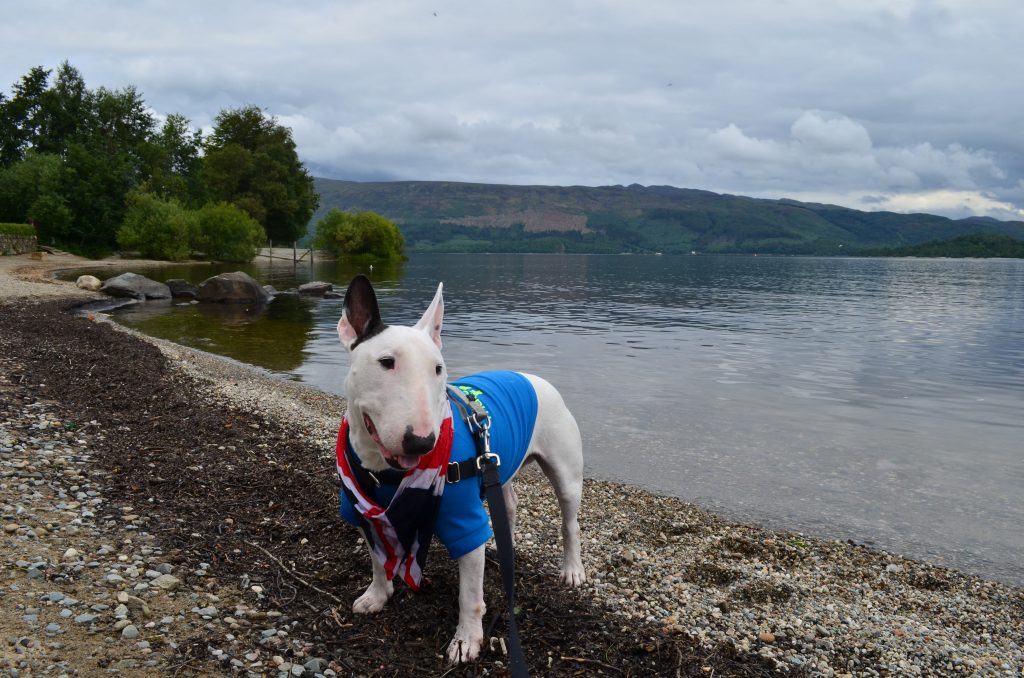 My charming studio flat in Bournemouth stood atop a cliff overlooking the beach, one trampoline jump and I could end up paddling in the freezing cold English water. Instead, on this breezy day, my butler Danny and I walked down to the seaside Harvester’s for some rotisserie chicken and to feel the cool late summer wind before picking up the rental car for our planned week-long trip up north to Scotland and Ireland.

The plan was to get to the Highlands, kayak across Loch Ness and use my extraordinary sense of smell to confirm the existence of the fabled creature known as ‘Nessie’. We would then cross over to Belfast in Northern Ireland to do some exploring and then head down to Dublin for Guinness beers in celebration of our history-making discovery.

And that was the plan.

Once we got the rental car, a maroon Nissan Juke, it was time to pick up a few friends who were scattered throughout Dorset. One of them had a bull terrier and so naturally I was interested in meeting another one of my kind.

A white bull terrier with a black patch on his eye, he went by the name of Lancelot, like the famed knight of King Arthur. After a brief challenge where we mostly stared at each other, we finally sniffed each other’s butts. Just a way to get know each other, nothing more. I thought he seemed like a cool guy, yet possibly a bit unhinged. You never know with a bull terrier. Nevertheless, I rallied the troops to commence the road trip and then deemed Sir Lancelot as my personal knight, and me as King Arthur, whether he acknowledged it or not was not of my concern.

Me :”I hereby state that as your newfound king, that you get this car started and immediately drive me up north to the highlands so we may find this dinosaur.”

Danny: “I hereby state that you may stay quiet for the duration of this trip.” 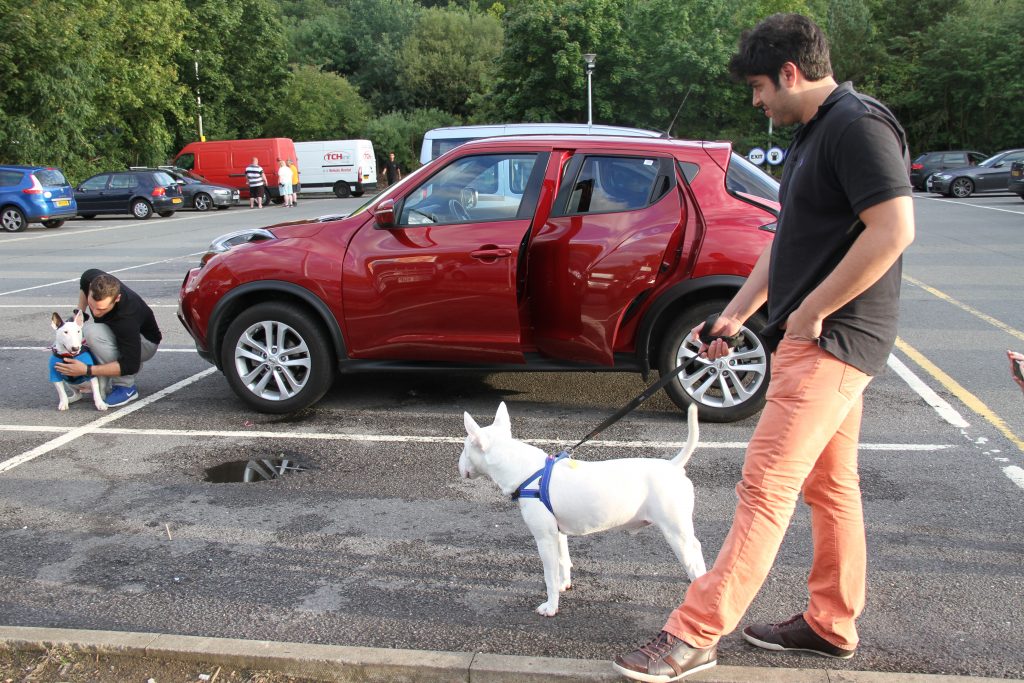 So there we were, 3 men and two dogs and a host of suitcases. Sammy and his bull terrier Lancelot, me and Danny and an American named Michael from California who had a childlike wonder about the world, a pre-requisite if you are to embark on adventures with the two greatest travellers in the world today. All packed in the Juke. As two stubborn bull terriers, we both butted heads over who gets the front seat.

Lancelot: “No, I called it first in the name of Camelot”

This went on for a few minutes but I won, being the older and wiser of the two. 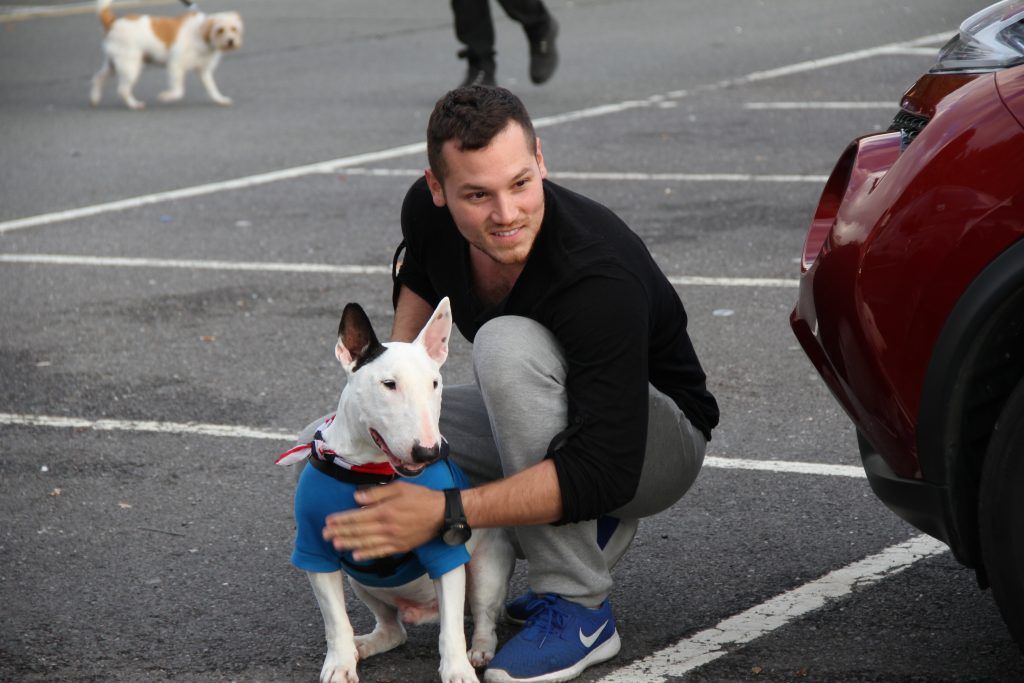 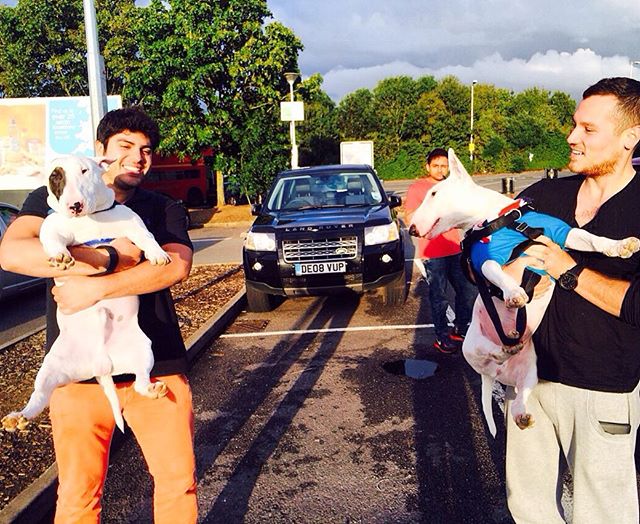 Our first stop was Glasgow to see a few of our Scottish friends.

​​Glasgow has some very charming parts to it, including neighbourhoods adorned with street art and murals and George Square is a major tourist attraction with statues, historic buildings and monuments.

Rocky: “What do you say we grab a couple of cans of spray paint and create the best work of art on these walls, portraits of the best bull terriers: Patton’s bully, the Target dog, Oliver Twist’s dog, Spuds Mackenzie and of course yours truly: Rocky the Traveller”

Danny: “As your advisor, I think that’s a great idea. We can do that, but first as per tradition we must grab a few beers in Glasgow. They say the best art is done drunkenly.”

Rocky: “I’m all about tradition.” 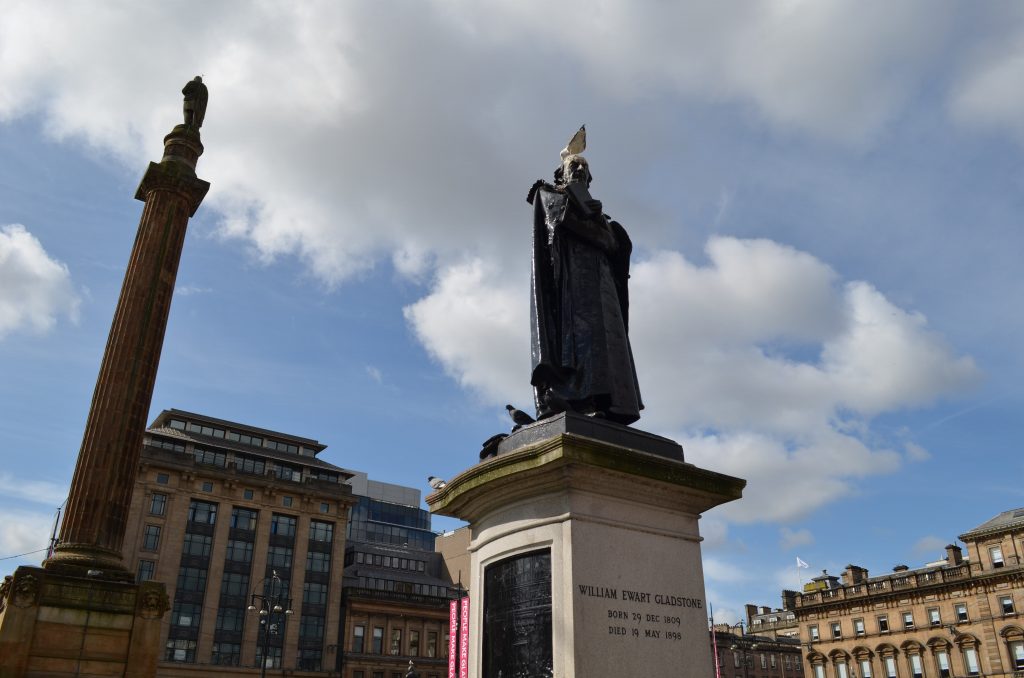 After we downed a few beers at a local pub near the city centre we returned to the hotel to plan our trip up to the highlands, Belfast and Dublin. We should’ve done this much earlier, but we live life on the edge and do things frantically at the last minute.

Back in the hotel, we sat down inside of our room and huddled around a laptop.

Michael: “Guys I just looked at ferry tickets to Ireland, they are out of this world expensive. I say we change the plan.”

Rocky: “Why can’t we just swim there?”

Michael: “Or maybe if we leave early morning or try another route, we can save money.”

Michael and Danny searched furiously on the internet trying to figure out how we can go to Ireland from Scotland for a fair price.

​​Rocky: “I think I may have a solution to our transportation problems.”

Rocky: “Let’s say we head to the highlands, as per our plan, we rent a large boat out while we are at Loch Ness, capture the elusive monster named Nessie and we ride the mythical creature to the green pastures of Ireland.”

Michael: “I think you might be on to something. Or on something. I think I’ll leave the room now and get a drink.”

Danny: “As your driver, I advise you that we rent a boat, take said boat across to Ireland and then explore the Guinness factory. There’s no mythical creature on the boat or even in that loch. But I’ve heard the water can make you young forever.”

Our friends from Scotland, two girls: Natalie and Charlene had suggested we instead go up to Loch Lomond and then Edinburgh instead of taking the ferry to Ireland, since we were pressed for time, we all agreed.

So no Ireland this time around.What a shame, but perhaps something to look forward to another day.

So instead we drove up to Loch Lomond, half hour from Glasgow and in between the lowlands and the highlands. It’s a sprawling freshwater loch and has the largest inland stretch of water in the UK.

I looked at the Loch Lomond national park through the window of the rental car, “My goodness, this place is amazing!”

The air smelled different up there, as if the pure goodness of nature has not been contaminated by humans.

Naturally, every large loch or hill or mountain must be conquered by kayak, climbing or otherwise. Danny would paddle my kayak across Loch Lomond while Sammy paddled for Lancelot and Michael paddled for himself. Loch Lomond has quite a number of islands and we were heading straight for one of them.

Lancelot: “Guys I think I want to go back, I feel seasick.”

Rocky : “A true bull terrier can handle anything.

Lancelot: “Maybe, but a true English bull terrier would also have  pint and I think I will go back to dry land and get a beer and maybe I will come back.”

Rocky: Relax my friend, it is a kayak and not a boat, you shall be fine.”

Lancelot looked uncomfortable in the kayak and was moving around and rocking the boat.

Sammy: “You talk so much Rocky. We’re going to turn around, we will wait for you guys when you get back.”

So Lancelot and Sammy  turned around before they made it to the island while the rest of us kept trudging forward.

And when we made it, we came crashing down on the rocks and lied still for about 20 minutes before we got up to get a good look at the view.

Rocky: “My goodness, this is stupendous, scratch that, it’s beyond stupendous, it’s utterly breathtaking.”

We were indeed on a natural high that day, riding a clear wave of accomplishment at having paddled to the island and to have made it to Scotland.

After a day spent exploring Loch Lomond, we hit the road again, at this point I couldn’t contain my excitement as we were finally head to Loch Ness in search of the golden goose, the monster whose discovery would lead to my name being etched in the annals of canine history. 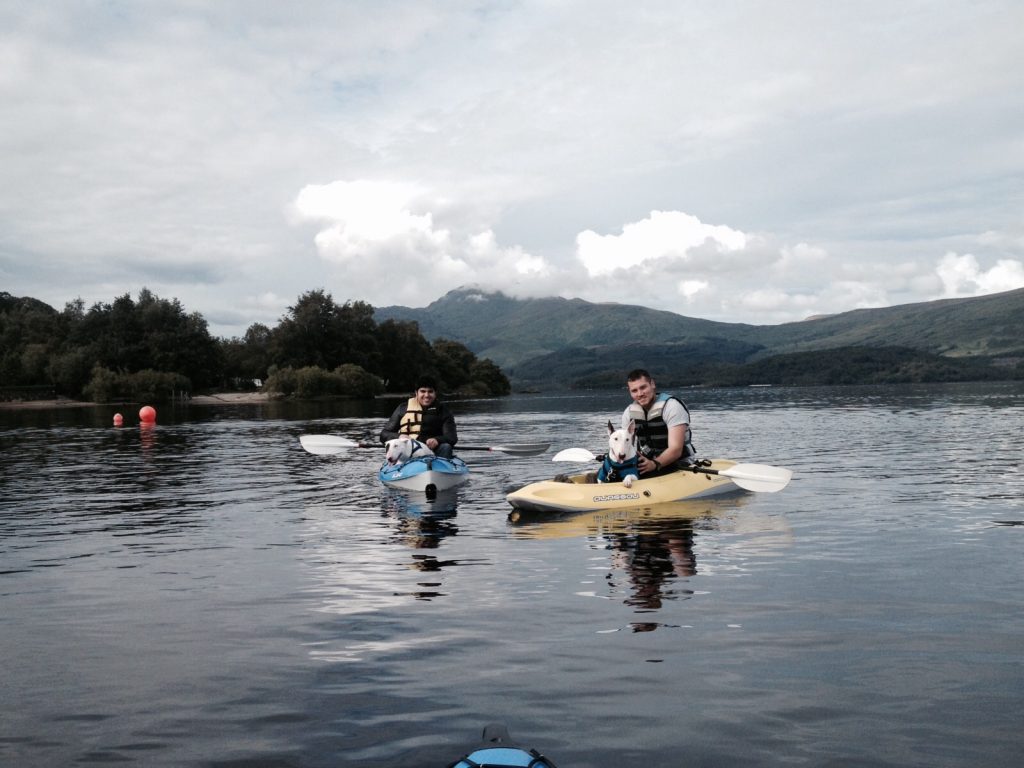 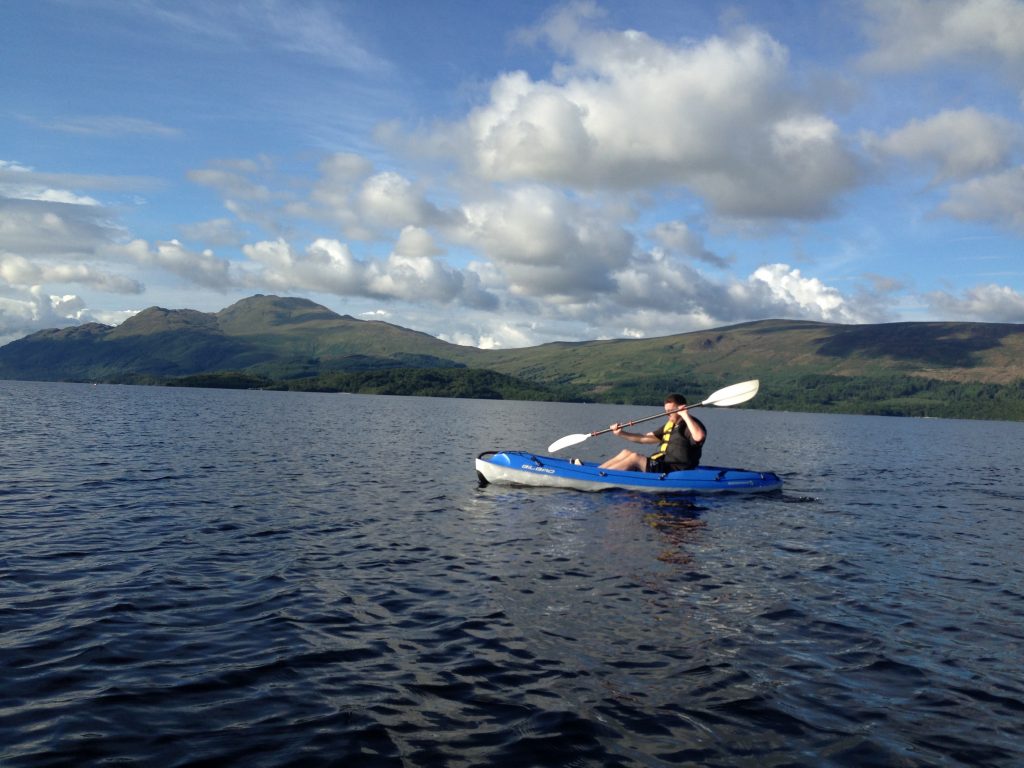 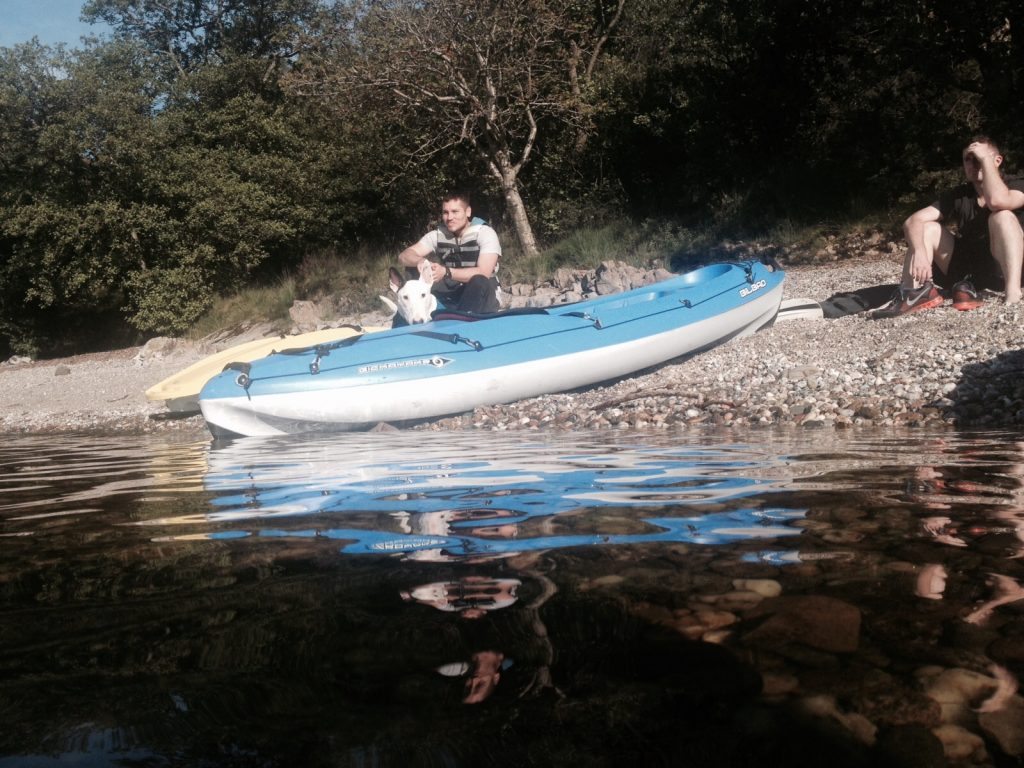 We also explored a bit more around the village surrounding Loch Lomond. 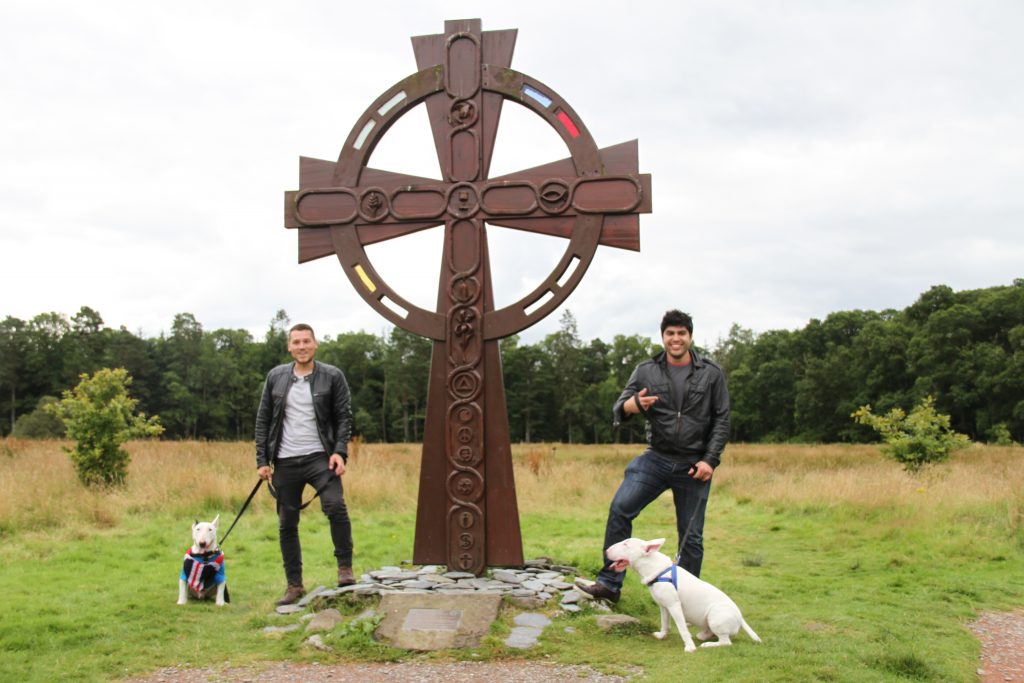 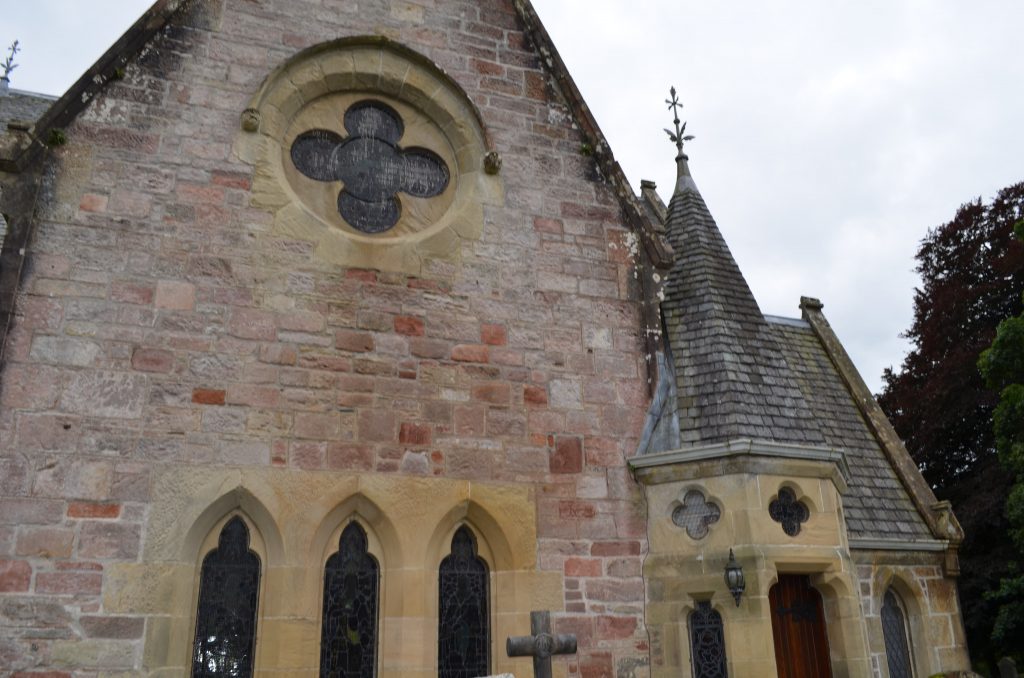 Part 2 of our Scottish adventure is up next!

Here’s a few more photos of our Glasgow and Loch Lomond adventures: