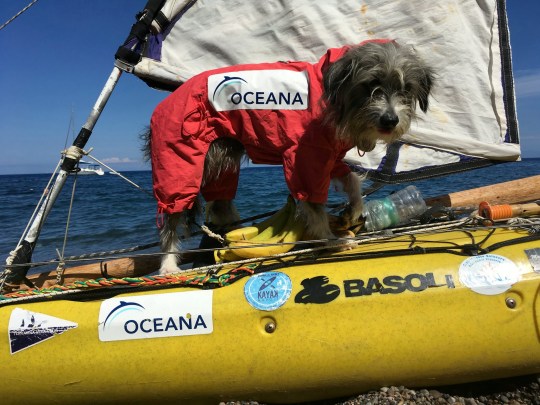 A Spanish kayaker was traveling through Italy when he spotted a street dog and proceeded to invite the dog on a kayaking adventure around the world, reports Metro.co.uk.

The kayaker, Sergi Basoli, was traveling through Italy when he spotted a dog wandering the streets.

“I was in the middle of my kayak travels and found a dog on the streets, traumatised and a bit weak,” Basoli said.

“I took her out of the street to give her shelter, food, water, and health care,” Basoli said. “After some days I had to continue my trip, and decided to try and take her with me. First days she vomited, but then she got used to it, and started to become a sailor.”

The Italian stray dog, 7-year old Nirvana, quickly adapted to life on a boat with Basoli training her to follow commands such as ‘go to land’ and ‘come back to the boat’. Basoli started by sailing around in the kayak, then hopped aboard a wooden boat, with Nirvana by his side every bit of the way.

“We’ve sailed basically with the kayak first, and then with the wooden boat,” Basoli said. “A total of 8,000 miles in Italy, France, Malta, Spain and Portugal.”

Basoli plans to start a new project in Barcelona with the help of his new sidekick Nirvana, to encourage people to discover the sea.

It’s heartwarming to hear when a human rescues a stray dog from the streets and makes them a companion dog. What is even more amazing is how quickly Nirvana was able to adapt to a life on sea and how she is now traveling the world and experiencing new sights, smells and sensations that are vastly different from the streets she grew up in.

Basoli rescued Nirvana and gave her a new lease on life and is now traveling the world with her but doing it in a way that is quite unique.

Furthermore, kayaking can be a fun adventure for humans and their dogs and one which can quickly bond them together.

Rocky the Traveller said, “What a lovely combination these two make. I’m happy to see there are other dog and human pairs out there who are traveling around Europe and doing so in such an adventurous way! It makes me miss the days of kayaking and after reading about these two my paws are itching to get in a kayak and travel around the seas!”