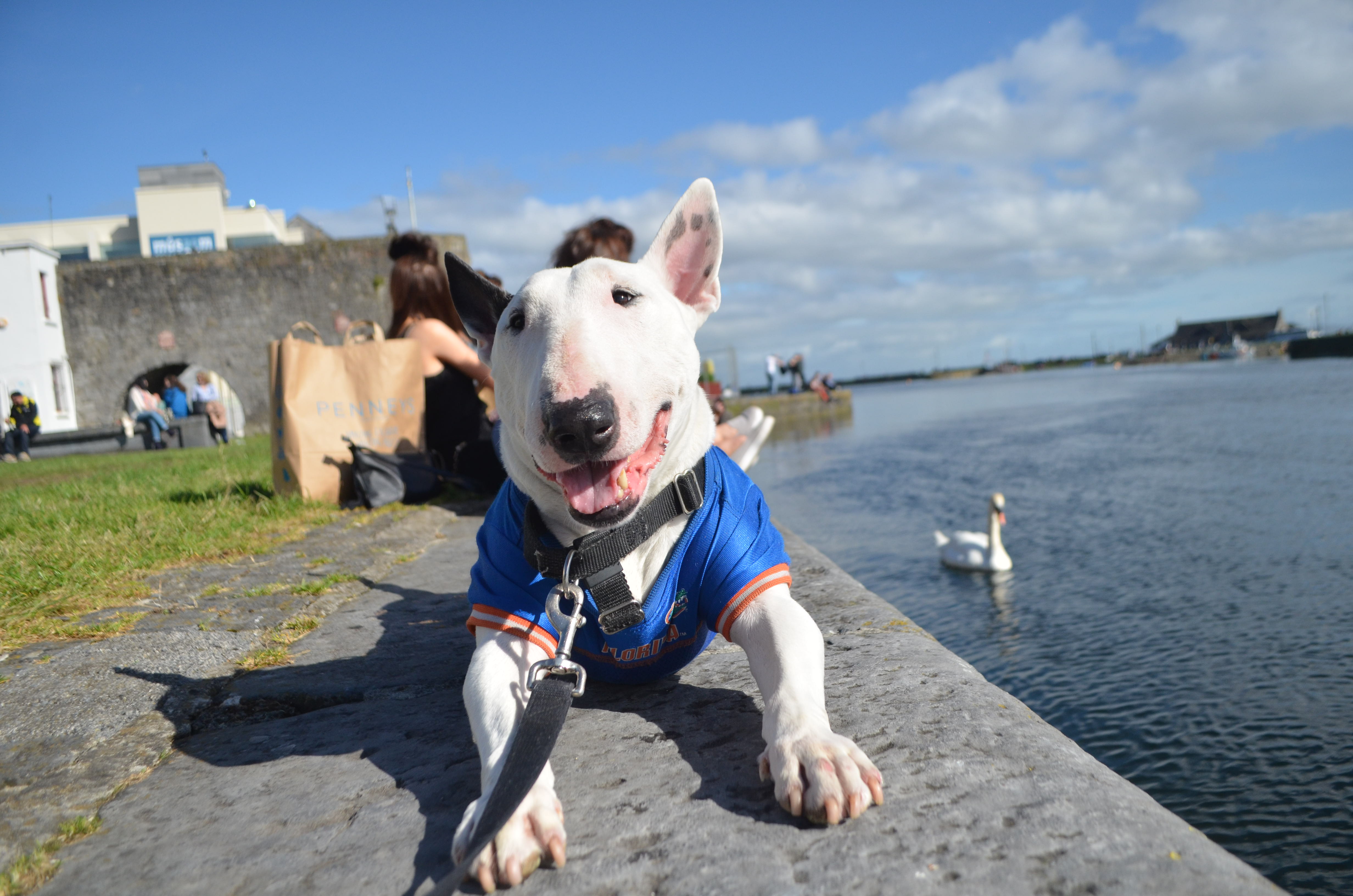 When I first heard we were going to travel to Ireland, I thought I’d prepare myself by eating a big bowl of my second favourite cereal: Lucky Charms. I also prepared myself to meet some leprechauns and collect some gold coins. But most of all I was excited to drink some Guinness beer!

So I chomped down my cereal then Danny and I rushed to pick up our rental car and then our esteemed traveling partner who goes by the name of Sophie. She joined us on our adventure. We all packed into our car and drove northward to Holyhead in Wales for the ferry. I brought my pet passport but once we made it there I found out that I didn’t need it as the UK and Ireland share an open border.

Once we embarked on the Island via the Dublin port we set our things down and immediately explored the country starting with Galway.

As we explored more of Galway, we discovered that there were lots of friendly people around. I also saw that there weren’t too many other dogs around the city. Sure, I saw the occasional mutt, but for the most part I was the only dog in town and I felt even more special when all eyes turned to me when I walked down a street in the city center.

We sat down in a pub across from the University campus where Danny had a pint of a new Irish stout he discovered there called Murphy’s. He instantly fell in love with it and while drinking it, I stared at the dark beer and I drooled a bit on my Florida Gators jersey. No big deal. I couldn’t help myself and so I had a taste and then I wanted some more. The sensation of it hit me like Leprechaun landing on my back. I discovered a new world of beer and I hadn’t even been to the Guinness Museum yet.

After the Irish beer refueled us and we walked around the city center and I really enjoyed its quirky energy. There were all kinds of shops everywhere and live entertainment on the streets. A crowd gathered to watch a man play the violin on a tightrope. There were all kinds of cool attractions like this going on as well as an open market with food! It was my kind of city!

There was much to sniff around and I stopped and smelled beer in every corner and it didn’t annoy Danny as he too stopped with me to observe Galway’s shops and attractions.

We had the luck of the Irish as on this particular day there was a food fair near the church and for the first time ever we had a savory crepe filled with Goat’s Cheese and pesto. It was one of the best-tasting crepes I had in my life and I’ve been to France!

After walking throughout the city and smiling at many Irish people we moved toward the Quay. My smile grew bigger as I marveled at the beautiful and green scenery around the river. Would you expect anything less than green while in Ireland?

After spending most of the day in the city center of Galway we ventured out to the countryside  and saw a wonderful castle and some nice houses.They were surrounded by lush rolling hills and more green. It was also far away enough from the city that we could take our time and explore it without the usual city rush.

We visited Dunguaire Castle, a 16th century tower house that sits atop of Galway Bay and spent some time surveying its architecture, but unfortunately the inside was already closed.

Our visit to Galway county was only just getting started as we are exploring the famous Cliffs of Moher on the next one! Can’t wait! See you then my friend and I’ll be sure to bring the luck of the Irish!