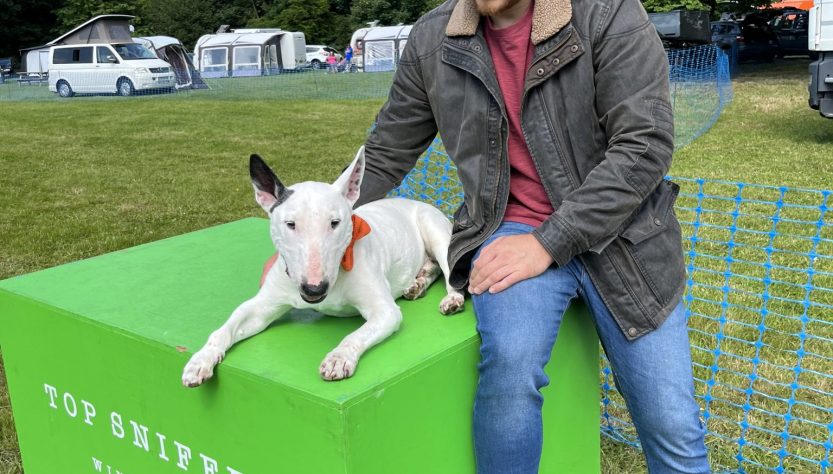 Dogstival 2022 is in the books and what an event it was for both four-legged and two-legged alike!

Taking place at Broadlands Estate in the town of Romsey in the South of England, Dogstival 2022 brought all the dogs out for this annual event which took place over the weekend of 4 and 5 June for a special ‘Jubilee edition’.

As expected, the festival was filled to the brim with dogs and their humans even if the weather was a bit cloudy and grey. There were tons of activities, shows, shopping, and more entertainment.

From the point of view of our little bull terrier Rocky, his tail wagged like lightning at the sight of all the dogs, the food and the fun. Walking into the Broadlands Estate on the first day of Dogstival 2022, Rocky led the way, following the map of the site clockwise and stopped and sniffed at each and every exhibitor stand which featured food, drinks, and products for dogs such as doggy bow ties, bandanas, treats, dog food, luxury beds, leads, collars, doggy sunblock, shampoo and more!

Live music also played throughout the day and the sound of happy puppies, festive barks and splish-splashing filled the air on Saturday. We also stopped and saw a few dog shows, heard different dog experts speak about subjects such as search and rescue dogs, feeding raw diets and there was even a pet detective who spoke about DNA dog databases. There was even a few different comedy shows on both days!

Rocky spent most of the day on Saturday sniffing about and meeting many other dogs and probably wished he met every single dog at the festival, but this would’ve been challenging as there were thousands of dogs in attendance! He also gladly ate every single treat offered to him by the many friendly exhibitors.

For us humans, we did also manage to play some fun games, watch live music, play with other dogs, including the massive and friendly Leonbergers. We entered a small funhouse mirrors, had a drink at the ‘Dog Furiendly’ sponsored tent, and took some photos at the ‘Barkingham Palace’. We even got to reunite with old friends who we’d seen in previous dogstivals and other dog events.

It was also entertaining to simply watch the dog agility shows, the flyball, and the dogs who dove right into the pools to chase balls! There were also the UK BMX bikers who performed some truly crazy stunts all while we sat back and sipped on some delicious local coffee.

We nearly walked the entire site and saw almost every vendor on Saturday. It was a day well spent but we came back for more on Sunday.

Sunday was also extraordinarily eventful with thousands of dogs again and this time Rocky led us to the opposite direction from Saturday and we circled the site counter clockwise. We spent more time watching the dogs jump into the paddling pool and run around in the agility fields.

One particular highlight for us was the number of bull terriers present! We saw about seven bull terriers throughout the weekend and surely there were more!

See more photos of the incredible annual event below!