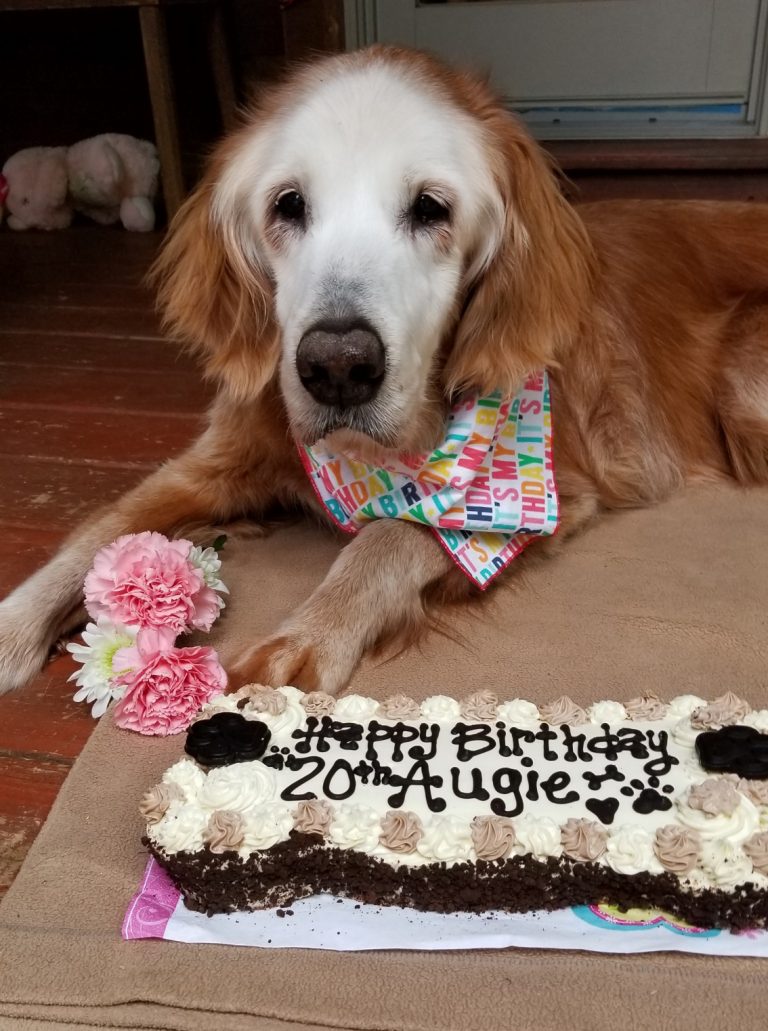 August, better known as Augie, celebrated her landmark birthday surrounded by her pet parents, her friends (including fellow golden retrievers) and of course, birthday cake!

After being re-homed twice (due to no fault of her own), she eventually landed with her current pet parents Jennifer and Steve Hetterscheidt of Oakland, Tennessee, having been adopted at 14 years of age and she is still healthy.

News of the record-setting birthday reached worldwide media coverage with outlets such as CNN and Today.com covering the story. GoldHeart Golden Retrievers Rescue in Maryland confirmed the news, writing in a Facebook post that Augie is the “oldest known, oldest living Golden Retriever!”

According to the Guinness Book of World Records, the oldest dog ever was an Australian cattle-dog named Bluey who lived to 29 years and 5 months old.

When the Hetterscheids adopted her at 14 they had no idea about what lied ahead of them. They had figured that most people wouldn’t want such an elderly golden retriever.

In an interview with Insider, Jennifer Hetterscheidt said she was working as the intake director at The Golden Retriever Rescue Southern Nevada when Augie was dropped off. Her previous pet parent, in Utah, had fallen on hard times and had to live in a shelter, where she couldn’t bring dogs.

“We started fostering her as a ‘forever foster’ because we figured no one would want to adopt a dog already a couple years older than the normal lifespan,” Steve Hetterscheidt told Insider.

The couple would go on to adopt her two years later and then moved to Tennessee.

Since they fostered Augie, they have traveled with her on RV trips all around the country. She also has the company of several canine and feline siblings, and she is still active, playing fetch in the pool.

While the Hetterscheids have given her a wonderful life, Augie has rewarded them with six years of love and loyalty.

Jennifer says Augie is ‘surprisingly healthy’ and can move around well, however she adds that Augie is a bit shaky at first when she gets up.

“She’ll stumble now and then but as long as she can get a grip where she is, she can get up,” Jennifer Hetterscheidt told CNN. “Even though she’s easy to care for, we watch her like a hawk every moment that we’re awake.”

Augie was diagnosed with some kidney issues when she was 14, and since then she eats a mixture of wet and dry Hill’s Prescription Diet k/d, and takes some supplements for her kidneys and joints.

She also receives subcutaneous fluids twice a week, which her parents say has helped her ‘perk up quite a bit.’

The original plan for Augie’s 20th birthday party was to have over a 100 people celebrate the milestone with her, however the pandemic led to a cancellation of those plans, but her parents still made sure she felt loved.

“She had a dog-friendly carrot cake, the interior of the house was completely decorated,” Jennifer Hetterscheidt told CNN. “She got all her favorite foods like blueberries, bread and pasta, of course, in moderation.”

The story of Augie and her pet parents is truly a heartwarming and inspiring story. Since adopting her at 14, they have made the best out of Augie’s teenage years, showing lots of love, taking her traveling and having her play in the pool and with friends. The fun seems to be far from over for Augie. Her milestone birthday party was celebrated with her friends and family, showing just how much she was loved.

You can see that they have taken great care of her and loved her dearly which has surely contributed to her quality of life.

The dog lovers of the world wish we could all have our pets live long lives and stay with us as long as they can. With stories like this, it inspires us to make the most of our time with our furry companions and to continue to give them a healthy life, for as long as we can.

Rocky the Traveller said, “Augie is such a sweet soul, you can see it in her eyes. I would love to meet her and play with her and find out what her secret is for staying so young at her age. You can tell her parents have taken care of her well. I look up to her and other record-setting ‘senior’ dogs who get to spend so much time in this world with their humans.