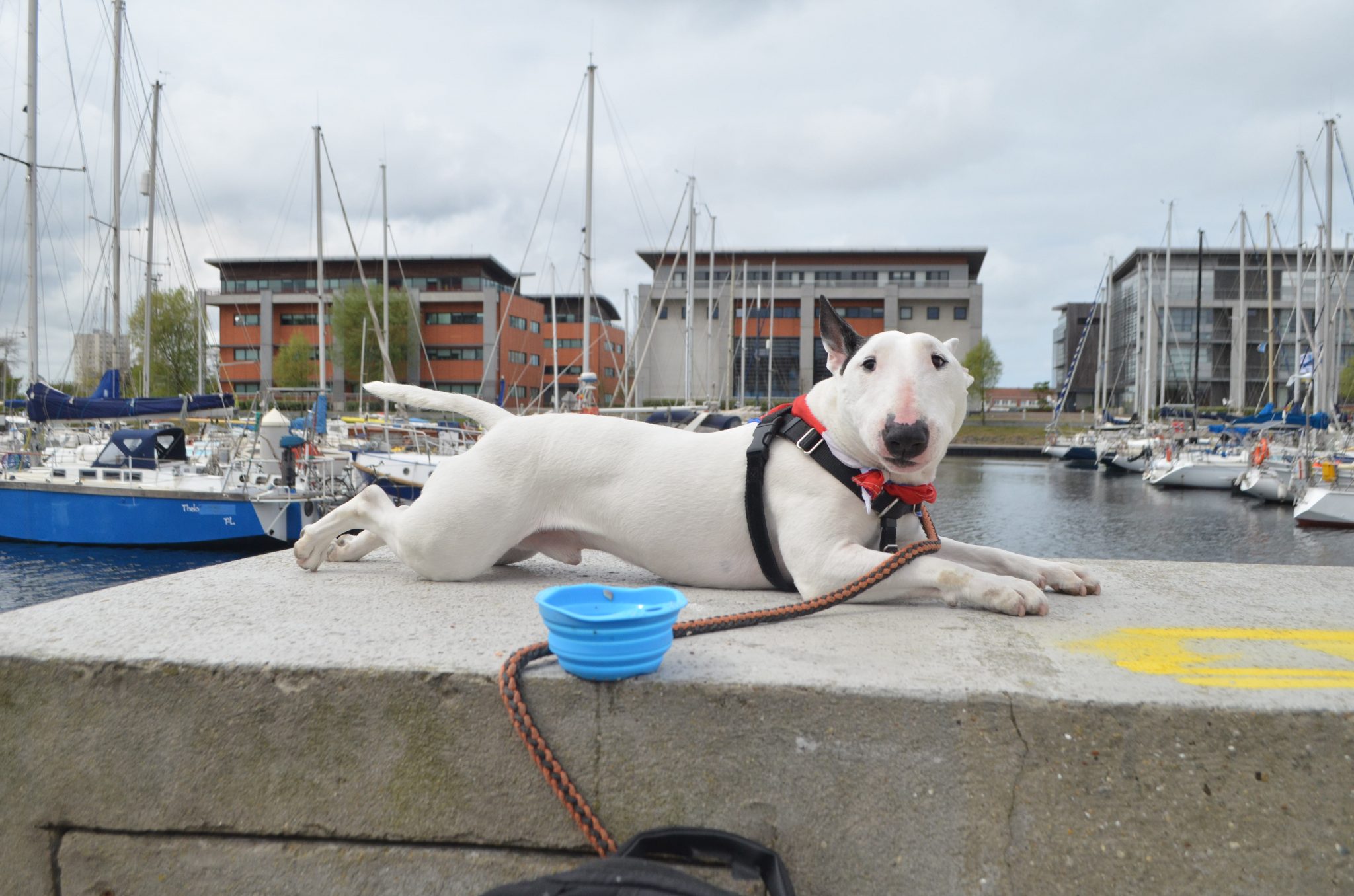 I just wrapped up a trip from France and I’m now returning to the United Kingdom and on my way I’m visiting the port city of Dunkirk. But before I embark on the ferry ride, I’d like to share what it’s like to go on this ferry ride as well as the other little things you need to do.

So we should first talk about the few ways in which people travel between England and France as well as the rest of Europe. This way you’ll understand as to why the ferry and the channel tunnel are really the only ways (for now) to travel back and forth between UK and France, with a dog.

Planes: I wish I can just hop on a plane and sit in the cabin with my human while eating microwaved airplane food for a quick flight to Paris, but alas, the United Kingdom has strict rules on pets entering the country due to rabies. So unless you’re a guide dog, it’s unlikely you will be able to enter via the airplane cabin. Unless…you’re a master of disguise then you can train your pug or whatever you have, to be a guide dog. Joking!

But, there is good news! If you’re traveling from UK to France, and beyond, and if your dog is small enough to fit under a seat in the cabin, then you can travel in a plane. Not so good for us bigger dogs though.

Trains: I love trains. In fact, I can take trains anywhere in the UK. Also a fact, I can take them anywhere in France! But, and this is a big BUT, you cannot take them between UK and France. Which is a bit crazy. The Eurostar is the only train that travels between UK to France. From what I understand, it comes down to the UK’s strict rules on rabies as well as the Eurostar train’s own rules.

Bus: See trains. As much as I love trains, with a dog, you cannot go between the two countries in a bus. Unless you’re a guide dog. (My disguise idea sounds better and better now).

Cars: Cars, the greatest invention ever! After pizza, I mean, duh! I love car rides and especially when I get to stick my head out of the window and feel the wind…until a bug hits me in the face. Anyway, traveling between France and England with a car is a piece of cake!

You can take the channel tunnel in Folkestone, which takes about half an hour or a little more. Now, technically, the Channel Tunnel, or Chunnel, is a train ride, but you must have a car (or book a taxi, more on that below), in order to get on the train. The tunnel ride goes by quickly so you can stay in your car with your dog. And no, unfortunately, you won’t be able to see any fish while you cross the English Channel, I asked too.

Another option by car is the car ferry, which you can take from various points. Me and Danny have booked cars several times and have embarked on many ferry crossings! It’s easy.

The quickest route and also the busiest, is the Calais, FR to Dover, UK route. It’s only about an hour. There’s also the Dover to Dunkirk one nearby. As I said there’s quite a few all over the country! Check with the many ferry websites out there (some listed below). We usually book via DFDS Seaways, which is awesome!

But if you don’t want to take the ferry, but you have no car, then you can still get across by hiring a taxi that can take you from Folkestone, UK across the channel tunnel to Calais, France. Prices can vary here, but always book ahead! The more money you can save means more money for croissants in France or fish and chips in England!

Me and Danny regularly hop on the ferry from Newhaven, UK to Dieppe, France. Newhaven is about 20 minutes from Brighton, and Brighton is only about an hour from London! Booking’s really simple. Book your ticket as a foot passenger and add in a dog as an option. Then from there you can take a train to Newhaven Station and walk to the Ferry Terminal from the station (only a couple of minutes.) Then you can go inside the terminal office and check in and then you have to go back outside. Why? Well, the answer is that unfortunately, you’re not allowed to stay in the Newhaven terminal office with your dog, so you will have to wait outside in cold British weather with your things until the ferry begins to board.

Once you board, the ferry personnel will chauffeur you and your dog in your very own van to the ferry and walk you and your dog to the dog’s cage in the deck levels. There in the cage you can put a little pillow and some bowls of water.

Dogs are not allowed in the passenger areas which means they’ll have to stay in that cage for the duration of the crossing. But once in a while you can ask someone to escort you down the deck to check on your hound.

This also works both ways, to and from Dieppe. The only difference is Dieppe allows dogs in its office while you wait!

Many of the ferries we’ve gone on, including Harwich, UK to Hoek of Holland, Netherlands, are pretty similar to the Dieppe one. In the Holland ferry, which is about 6 hours long, you can put your dog in a kennel within a room and if you’re staying in a cabin room, you can actually check on your dog via his/her own CCTV kennel channel! You can also take them out during the long ferry ride to the outside decks so they can do their business!

Other ferries that serve the UK to France (and other Europe) routes also have cages that you can put your dog in. Some of the longer ferry crossings, such as Portsmouth to Caen, etc., have pet friendly cabins in which you can take your pet in to join you while you sleep. Since some of them are long crossings, they will not allow you to leave your pet in the car, which makes sense. Who would want to stay in a car for hours without being able to feel the rush of the wind outside? So instead these long ferry crossings will likely have kennels onboard.

Most of the ferries however, do not let pets in the passenger areas.  As always, call ahead to check and bring a pillow as well!

What to expect in the ferry rides

So you’re ready to board the ferry? Check out the above to see a glimpse of how the drive is.

If you’re going via car ferry, then most of the fast ferries across France ask that you leave your dog in the car, with the windows open of course! But typically these ferries, such as the Calais to Dover ferry, don’t have any cages, so the only place to keep your dog is the car.

But worry not, even though it’s in the deck, there are many dogs that travel this route and most sleep peacefully in the car, despite all the crazy car alarms going off! For me, when I went on this route, my human made me as comfortable as possible and put a pillow as well as some blankets, food and a bit of water as well as the leaving the windows cracked open.

The ferry crossing from Calais is only an hour long. However, there are a few other routes that take much longer. As I said before, many of the longer ferry crossings have cabins so that you can sleep while the boat transports you to the other side. Many of these cabins are even pet friendly where you can take your dog in.

My friends, there are tons of options if you want to get to France from England or vice-versa. There are also ferries from the UK to Spain, Holland, and Ireland.

If you do take the ferry, be sure to take a bit of time to explore the port city. Many of them are quite interesting! Dieppe, for example, has a nice castle and a beach. Calais also has a beach and a few other sights. Ditto for Dunkirk to Dover, Hoek of Holland to Harwich, Cherbourg to Poole, and others.

A bit of the Calais Port

A bit of Dieppe’s castle

Oh and how could I forget one of the most important things? The Pet Passport

This one is quite easy. When you leave the UK for France and you plan on leaving for an extended period of time, then you don’t need to do anything. You can just leave the UK but do however, bring your pet passport because you will need it to return to the UK.

Upon returning to the UK, a vet must treat your dog for tapeworm and record it in the pet passport (or vet paperwork). This is for every time you want to return to the UK. According to the official government site,the tapeworm treatment must have been given no less than 24 hours and no more than 120 hours (5 days) before you enter the UK. Your dog can be refused entry or quarantined if you don’t follow this rule.

If you leave the UK to France and return in less than 5 days, then it’s recommended you get the tapeworm treatment done before you leave the UK, that way you’re still treated. 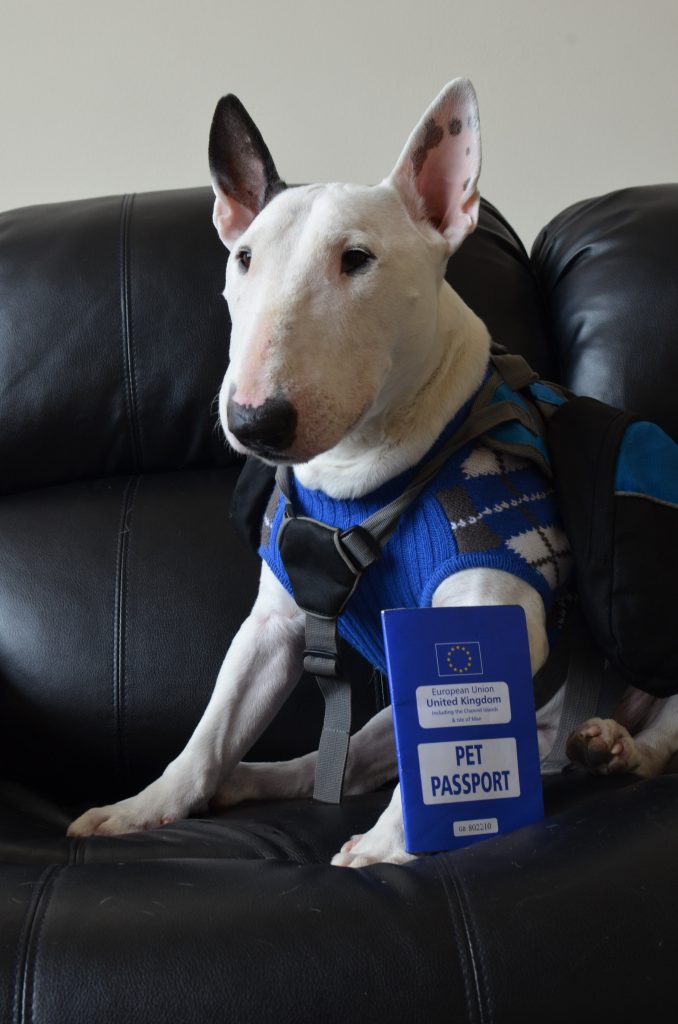 The ferry is a wonderful option if you’re bringing your pet! For more information check out the following ferry links:

If you need to travel beyond France, then check out the Man in seat 61’s tips on pet travel. They helped us loads!

If you have any more questions on how we did it, feel free to ask us any questions!

Traveling with your pet isn’t easy, but it’s worth it!

Thank you my friends and see you soon!