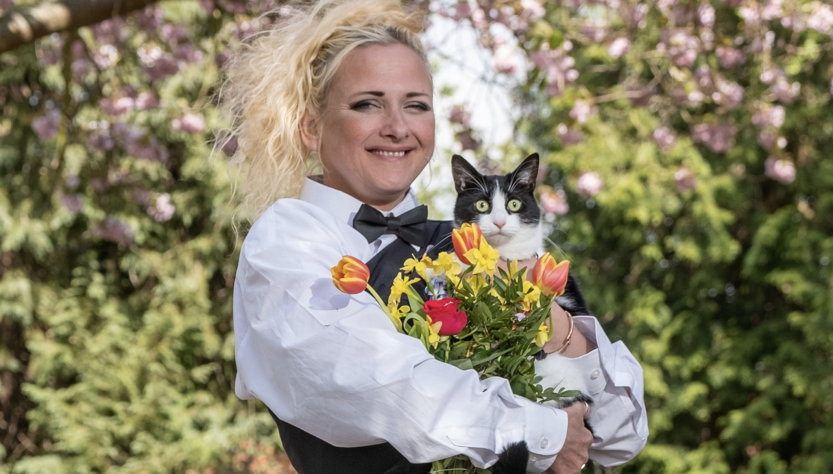 A woman in London married her pet cat, India, in order to circumvent the landlord’s leasing regulations that do not allow pets.

According to the New York Post, the 49-year-old woman from London, Deborah Hodge, came up with the plan to marry her cat after already having re-homed three previous pets due to landlords who rejected pets from their properties.

Hodge, who is also a single mother of two (humans), hopes the marriage will show property owners that India is more than just an animal.

She tied the knot in a civil ceremony on 19 April, according to The Tribune, and says that India is the most important thing in her life after her children.

“By marrying India, I need any future landlords to know that we come as a package and we cannot be separated under any circumstances as she is as important to me as the children, Hodge says.

During the wedding ceremony in a park in southeast London, Hodge and India wore tuxedo-style outfits.

India, 5 years old, meowed during the ceremony and the vows as Hodge’s friends watched on, including one who legally ordained the civil union.

“I refuse to be parted with her. I’d rather live on the streets than be without her,” she says.

Hodge previously had two huskies but once the landlord threatened eviction, she gave them up. She moved into her current unit in 2017 but her cat at the time, Jamal, was turned away so she gave up her furry friend. Later that year she adopted India after her landlord agreed to let her have a cat in the accommodation.

In 2020, the cat tragically lost a leg after being struck by a car and now relies on Hodge even more. Hodge then lost her job in March, struggling to pay the rent and now she and India face eviction.

She hopes the loophole will allow her to avoid the pet restrictions.

Last year, under a new tenancy agreement, landlords are no longer be able to issue blanket bans on pets. Consent for pets will be the default position, and landlords will have to object in writing within 28 days of a written pet request from a tenant and provide a good reason.

For tips on how to find a pet friendly flat in the UK, click here.