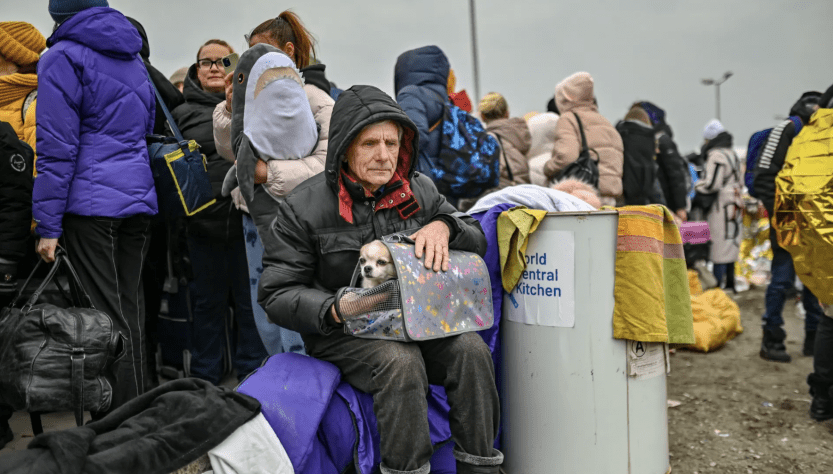 Many Ukrainians have fled their home country after Russia invaded on 24 February 2022 and many of these refugees have taken their pets with them.

Recent stories showing up on the news and on social media have shown Ukrainians taking their beloved pets, including dogs, cats, turtles and hamsters with them, even going so far as taking multiple flights to travel home or carrying their elderly pets with them across the border.

For example, a fifth-year medical student in Ukraine stayed in the war-torn country and skipped at least four special flights until the Indian embassy allowed her to fly with her Pekingese breed dog. She would eventually reach Chennai with her pet dog Candy.  Another student, a 21-year-old Indian student who was stranded in Ukraine, expressed his happiness and relief to be able to fly back to India with his pet cat ‘Ammini’ as the embassy allowed it.

Another story shows a woman and her family travel with their elderly dog and carry the dog for a distance of 17 km from a village in Ukraine to the Polish border. The story, published in The Guardian, highlights the sheer devotion and love between humans and their pets.

The pets have also been able to provide a source of comfort for their owners as animal and human alike become refugees amid the crisis. 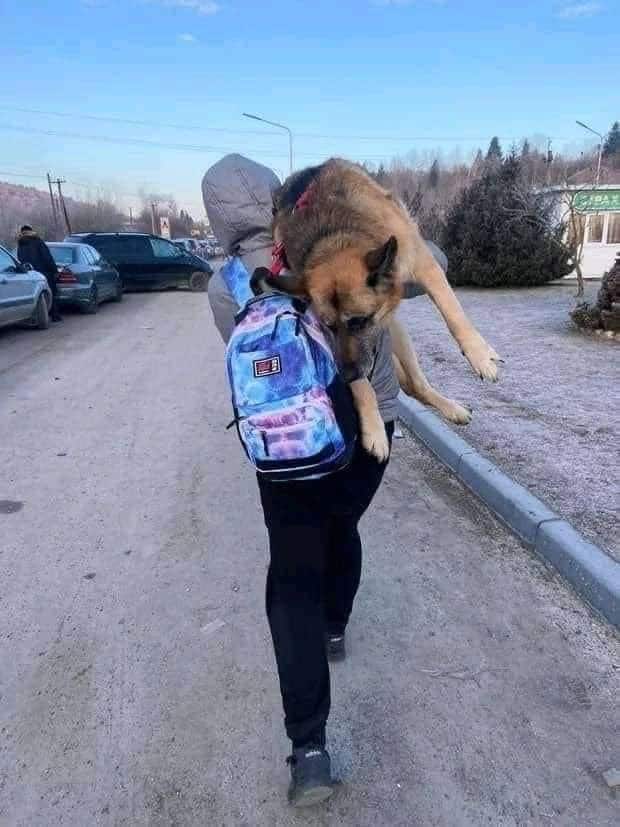 Fortunately, pet parents in Ukraine have been met with much support when they flee the country and attempt enter neighboring European countries with many governments relaxing the rules for pet travel for the refugees.

Usually, it takes a lot of paperwork, vaccinations and waiting times to travel into the EU but in the face of the crisis, the rules have been relaxed to allow Ukrainians to flee their country with their animal companions.

Not only have the rules been relaxed but shelters near the border and rescues have been set up near borders and they are taking in animals that have been impacted by the invasion including stranded animals.

One organization, the Winkler Aktiv organization is looking after animals left behind as well as street dogs in the shelter in the Polish town of Medyka by the Ukrainian border. It is also gathering aid and then taking it to the Ukrainian city of Lviv. There they try and organize people who can drive them to smaller areas affected by war to try and deliver food for the animals.

As a result of the invasion and the refugees crisis, the European Commission has advised EU member states to cut red tape for Ukrainian citizens fleeing from the war to safety in the EU with their pet animals, to give refugees “one less thing to worry about”.

On March 2nd 2022, the European Commission proposed to activate the Temporary Protection Directive  to offer quick and effective assistance to people fleeing the war in Ukraine. Under this proposal, those fleeing the war will be granted temporary protection in the EU, meaning that they will be given a residence permit, and they will have access to education and to the labour market.

On 4 March the European Council adopted unanimously an implementing decision introducing temporary protection due to the mass influx of persons fleeing Ukraine as a consequence of the war.

Vice-President for Promoting our European Way of Life, Margaritis Schinas, said, “All those fleeing the war will be provided with a secure status and access to schools, medical care and work. At the same time, we are working to facilitate efficient crossings at the borders for people and their pets, with the necessary security checks. The times are bearing heavily down upon us but the European Union and every single one of its member states is showing beyond a doubt that we are ready to step up to the plate and stand in solidarity with Ukraine.”

Another country which recently relaxed its rules for Ukrainian refugees is the UK. Refugees will be allowed to bring their animals into the UK without the usual paperwork.

The UK government recently announced it will cover the cost of vaccines including for rabies as well as microchipping costs.. In addition, quarantine costs will be free, and officials are considering setting up a new system of home quarantine if demand exceeds places in UK quarantine facilities.

Ukrainian dogs and cats that have already been vaccinated should not need to be quarantined when they enter the UK. Officials are also said to be working with vets and quarantine facilities to look at ways to support incoming pet parents.

“The maximum stay in quarantine for a pet which has received no rabies vaccination is four months,” the UK government stated. “Pets will be considered on a case by case basis, with a shortened quarantine period for those that are vaccinated. We are working with vets and quarantine facilities to make sure that the arrival of Ukrainians in the UK is not delayed by the process to make arrangements for their pets.”

Mimi Bekhechi, vice-president of People for the Ethical Treatment of Animals (Peta), said its workers in Poland and Ukraine had “seen first-hand the dangerous lengths that people are going to to bring their animals with them when fleeing”.

“It’s only right that the UK be a place of safe harbour for them. We hope the quarantine periods for animals can be shortened and that quarantined animals will be allowed regular visits from their human family members,” Bekhechi said.

Animal Welfare Minister Lord Goldsmith said, “As part of our new streamlined process, any animals which have already received some treatment may also have their stay in quarantine reduced and be returned back to their owner as soon as possible.”

Support for are family pets and animals

We have seen that many Ukrainians have refused to leave their pets behind and several organisations have aided in the rescue and sheltering of Ukraine’s animals.

Organizations such as PETA and the Humane Society International have partnered with veterinary clinics, animal shelters and pet supply retailers in neighboring countries to provide support to those with pets.

According to NPR, as of now there is no official figure on how many pets have fled Ukraine, but Shannon Walajtys of the International Fund for Animal Welfare has an idea.

“We’re estimating that there are hundreds of thousands of pets that have crossed over with families,” Walajtys told NPR. “The people and animals across Ukraine are experiencing something that many of us can only imagine.”

The United Nations estimates that 2.5 million people have fled Ukraine since the invasion began.

Peta, along with other organizations, have urged governments across the world to relax entry requirements and accept Ukrainian refugees’ pets.

“We strongly urge people not to leave their animals behind,” PETA stated. “Just like humans fleeing from war, companion animals will be scared and stressed and are dependent on their human guardians for comfort and security. We have been deeply moved by accounts of people walking enormous distances with their animals in their arms and have detailed below what Ukrainians need to know when arriving at border crossings of neighbouring countries in order to get their whole families, including their animal companions, to safety.”

While several organizations have already set up rescues and shelters, others are coming together get much needed supplies and food into the Ukraine.

The Romanian Red Cross and the Humane Society International have launched an unprecedented agreement to get vital pet food and veterinary supplies into Ukraine to help tackle a worsening animal welfare crisis.

“The tragedy of war doesn’t differentiate between two legs or four, and together with the Red Cross we will get aid to those people in Ukraine desperately asking for help to keep their animal friends alive in this crisis,” Humane Society International/Europe’s Romania director, Andreea Roseti said.

Others have volunteered their time to help pets in need in Ukraine. For instance, The Daily Star reports that a dog groomer is planning to drive to Ukraine with a van full of pet food and aid to try and assist those with animals fleeing the war.

There are several organizations out there that you can contact in case you want to help and/or donate. Such organizations include the ADA Adoption Center in Poland, PETA, Network for Animals, and IFAW (International Fund for Animal Welfare) also has a list of resources here that include. For more information on how to cross the border with animals, Four Paws in the UK published a guide here.